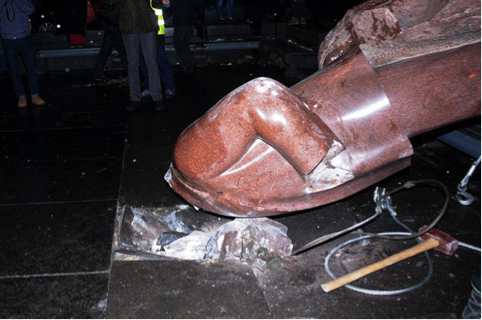 In a symbolic rejection of Russia’s interference into Ukraine’s domestic affairs, protesters toppled and smashed into pieces Kyiv’s last remaining statue of Vladimir Lenin. The market for the pieces of the monument was quick to develop, with the statue’s hand selling for as low as $125. Other pieces could be purchased by weight for only $6 per kilogram. The highest bidder is yet to determine the price of the statue’s head.

As demonstrators continued to set up camp at Maidan (Kyiv’s Independence Square, the epicenter of the protests), President Yanukovych declared on Tuesday, December 10th that he would be willing to resume the EU talks with Brussels. At the same time, the President underscored the importance of strengthening the economic ties with Russia. Next day, December 10, 2013, clashes broke out between Ukraine’s special security forces Berkut and peaceful protesters in downtown Kyiv.

As is well known, mega-rich business-owners (referred to as the ‘oligarchs’) wield huge political power in Ukraine because they own and control key economic resources. They have enriched themselves under the current, pro-Russian regime, and one would think the oligarchs would staunchly oppose any changes to the status quo.

Yet, upon closer examination, one discovers that the rules of the oligarchic game have started to change several years ago, to the detriment of many business tycoons. For the disadvantaged business moguls, the ‘European revolution’ is a way to reverse or at least to contain some of the negative changes that have been taking place.

I would argue that, if successful, the ‘European revolution’ (known as the EuroMaidan) would bring many European changes to Ukraine. At the same time, the EuroMaidan would strengthen the grip of many oligarchs upon key economic resources. In that sense, the EuroMaidan is both pro-European and pro-oligarchic.

To begin, Ukrainian oligarchs are not a unified group with clearly demarcated spheres of influence. At least not any more.

On the one hand, there is the ‘old’ oligarchy, closely aligned with President Yanukovych. A steel and electricity mogul, Renat Akhmetov, based in Donetsk (Eastern Ukraine), is the ‘old’ oligarchy’s most recognizable face. With an estimated $16 billion in net worth, Akhmetov is the richest guy in Ukraine, and the 47th billionaire in the world (he used to be 39th just last year). Commonly spotted alongside President Yanukovych during football matches, Akhmetov is the owner of a hugely successful Shakhtar Donetsk Football Club. He also boasts a premier One Hyde Park address in London, having purchased a 25,000 sq. ft. apartment there for a record high £136.4 million. It goes without saying that Akhmetov is an owner of a leading TV channel in Ukraine.

Would someone like Akhmetov, a business tycoon who amassed great fortunes under the current pro-Russian regime, and whose economic grip has not been challenged so far, support any pro-European changes? Certainly not. No doubt, Akhmetov would have to catch up with any pro-European changes later down the road, but he definitely would not push for such changes in the first place. And Akhmetov seems to be well prepared to face pro-European changes in the future.  For one thing, his TV channel has started to provide fuller and more ‘objective’ coverage of the EuroMaidan.

In addition to the ‘old’ oligarchy represented by Akhmetov and his friends, there are two other factions. One is an established faction, similar to that of Akhmetov’s. The other business clan is relatively new, and is commonly referred to as “The Family”. The Family is headed by Oleksandr Yanukovych, the President’s elder son. By its nature, the Family is very close to the President.

It is the rise of Yanukovych’s “Family” that has been posing a serious threat to the positions of many well established oligarchs in terms of limiting their business opportunities and encroaching upon their economic territories. The oligarchs challenged by the rise of the Family include guys like Dmytro Firtash, Victor Pinchuk, and Petro Poroshenko, among others. Firtash is an energy and chemicals mogul whose net worth is approaching $1 billion. Pinchuk is the second largest billionaire in Ukraine, boasting an estimated net worth of $3.8 billion. Poroshenko, Ukraine’s “Chocolate King”, the owner of “Roshen” confectionary, is the seventh richest guy in the nation, with an estimated net worth of $1.6 billion. Please keep in mind that Ukraine is a poor country.

Just to give an example, in August 2013, Russia blocked the importation of “Roshen” goods on allegations that they contained poisonous chemicals. Russia never backed its allegations with any official reports. One can see why Poroshenko feels threatened under the current pro-Russian regime. One can see why he is fed up with Yanukovych and the Family and would like to contain their intrusion into his business interests.

Firtash, Pinchuk and Poroshenko, as well as many other oligarchs would like to contain the rise of the Family which is so closely linked to Yanukovych and Putin, and they see the EuroMaidan as a politically convenient way to do so. Should Ukraine join the EU, it would be more difficult for the Family to encroach upon the economic interests of the old business elites. After all, the EU has legal standards, things like the rule of law, something Ukraine would have to commit to implementing.

Yes, I seriously doubt that the “pro-European” Ukrainian oligarchs are the true believers in free markets, free trade, democracy, transparency and the rule of law.  They enriched themselves under the current, corrupt, pro-Russian regime which was a far cry from free markets and transparency. Yet, if pro-European changes are a means of re-aligning the oligarchy and pushing the Family aside, why not support pro-European politicians? No wonder Firtash and Pinchuk provide support to Vitaliy Klitscho, a heavyweight boxing world champion turned politician and opposition leader, who they hope will win Presidential elections in 2015. No doubt, there will be European changes should Klitscho become the next Ukrainian President. (The extent and the degree to which Klitscho would commit to such changes is another question). But most importantly for the oligarchy, a pro-European ‘revolution’ would mean a repositioning among the business elites with the Family being sidelined.

Sidelining the Family will have its costs. Take the case of Firtash, for example. He currently enjoys a special gas deal with Russia’s Gazprom which allows him to import gas at favorable rates. Should Ukraine sign an Association Agreement with the EU, Russia would discontinue such deals and gas prices would rise. Yet it seems that the benefits (containing the Family) would outweigh the costs (higher gas prices).

So far I have presented a very cynical view of the ‘European revolution’, arguing it has been driven by business interests alone, not true convictions (that Europe is the right thing to do, etc). But what about the thousands of young people protesting on the bitter-cold streets of Kyiv? As with the Orange Revolution (which was started by students), youth and student movements have a massive presence at the EuroMaidan. What is more, the idealist young people categorically refuse to align themselves with political parties. They identify themselves as “Europeans”. They are the true believers. The true believes in the European future for Ukraine. For them, Europe is the promise of a system that works. Objectively and transparently. Where the same rules apply to everybody.  It is a promise of a system that embodies modernity, liberty, and freedom. Freedom of travel is one of the biggest concerns: to travel anywhere, Ukrainians need to obtain a visa, which could be an arduous process. The Association Agreement with the EU would be a step towards a visa-free regime.

While the youth movement is in no way political, the massive presence of the youth undoubtedly aids pro-European politicians and their supporters who carry political banners on the streets of Kyiv. And finally, among those protesting one could find thousands of Ukrainian Nationalists for whom saying ‘Yes’ to Europe is a way of saying ‘No’ to Russia.

I conclude that three movements can be discerned within the EuroMaidan. While these movements have different goals, they cumulatively reinforce each other. There is a genuine pro-European movement represented by the youth. There is a genuine anti-Russian movement embodied by Ukrainian Nationalists. And then there is an underlying struggle of Ukrainian business elites which paradoxically manifests itself as a pro-European pro-market movement while its true nature is pro-oligarchic. It is aimed at re-establishing the oligarchs’ control over the economy, control gained in pro-Russian Ukraine.   Out of these contradictions something new will emerge. But Ukraine will forever remain a country at the crossroads. 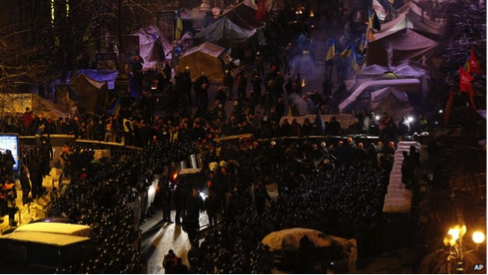 Ukraine’s special security forces Berkut are about to attack peaceful protesters in downtown Kyiv in the early hours of Wednesday, December 10, 2013. This action comes just one day after the EU foreign policy chief Catherine Ashton visited the EuroMaidan and expressed her support for the peaceful demonstrators.

8 responses to “Good-Bye Lenin? Is Ukraine’s ‘Revolution’ Pro-European or Pro-Oligarchic?”