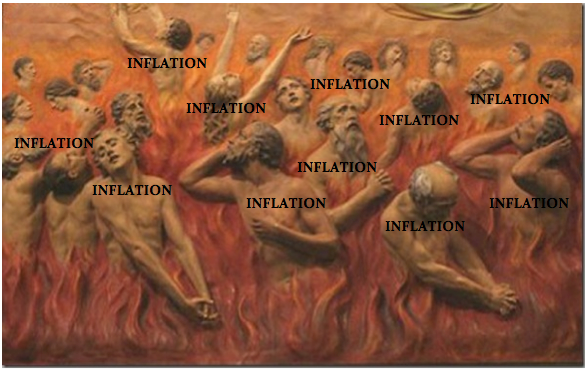 For the deficit hawks, the one true evil is inflation.  And since sin is everywhere, so is the hunt for inflation.  If Satan hasn’t already possessed you, he’s just around the corner stalking you:   that obsessive, unrelenting, conniving lowlife with fiendishly selfish malice and compulsion to control, plotting to gain unwanted access.  “Be self-controlled and alert,” the Bible tells us, “Your enemy the devil prowls around like a roaring lion looking for someone to devour.”

But here’s the rub:  this sort of thinking is not without negative consequences.  This is so because ever since the Great Depression and Keynes and FDR (well actually since Hitler and his economists) we’ve known from experience that the surest way to end a deflationary spiral and a depression is through government spending and deficits.  Conversely, we’ve known ever since WWII and Keynes and FDR that one of the most effective ways to contain an inflationary spiral is through increased taxes and lower deficits.  But the first of these policy options has been taken off the table.  Why?  Because government spending and deficits might, if not today then surely sometime in the future, lead to inflation.

So the search for sin – inflation – goes on, and here’s the bad part:  regardless of the cost.  It’s like some strange atavistic curse has overcome us, and we’ve turned the clock back to Phillip II’s inquisitorial war on heresy.  Phillip took it upon himself, and the Spanish, to defend Catholicism against the Protestant heretics and the pagan hordes of Suleiman the Magnificent.  It bankrupted Spain.  But according to Catholic orthodoxy, this was of no consequence.  “The Catholic Church holds it better,” wrote a Roman theologian, “that the entire population of the world should die of starvation in extremest…agony than that one soul, I will not say should be lost, but should commit one single venial sin” (William Manchester, A World Lit Only By Fire).   It did, however, produce some good art, such as Bruegel’s Massacre of the Innocents.  It is believed to be a portrayal of Black Alba carrying out the Spanish monarchs’ Edict of Blood in an attempt to suppress Protestant heresy in the Low Countries (Timothy Foote, The World of Bruegel). 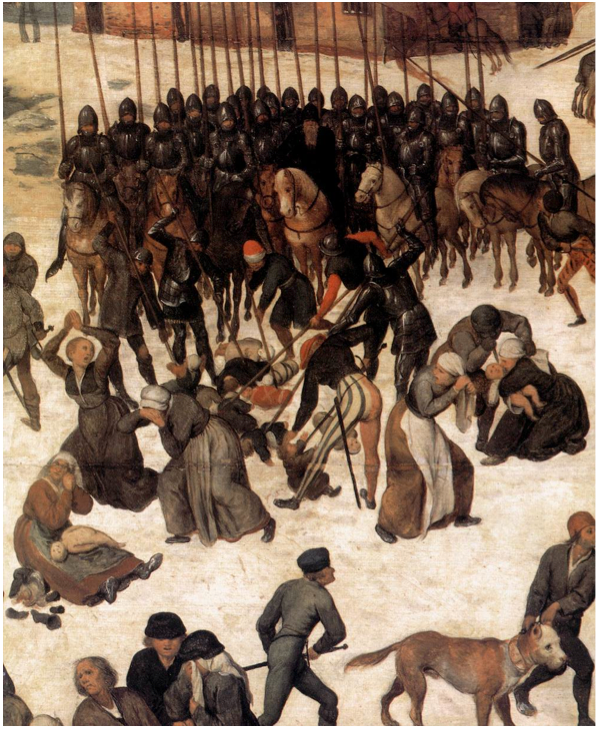 Bruegel, Massacre of the Innocents

The result of any such a single-minded obsession is that there is a disregard for context.  The deficit hawks do not cast their arguments in a historical or socioeconomic context, but rather present them as ahistorical truths.  They do not argue, for instance, that inflation must be abolished only when it is present.  Rather, they hold to the same course even when inflation is nonexistent, and in fact even when deflation is the problem.  Not only does one size fit all; it is supposed to fit them at all times.

All this reminds me of a fellow I worked with when I first got out of college.  The guy was brilliant.  He was graduated first in his class from the Colorado School of Mines with a degree in Petroleum Engineering.  We called him Highwater Huzzey because of his exceptional height and because he always wore pants which bottomed out well above his ankles.   But I’m here to tell you, riding in a car with him was an unforgettable experience.  When the speed limit sign said 60 mph, Huzzey drove 60 mph, not one mph more and not one mph less.  To him, driving and road conditions meant nothing.   If the sun was shining bright and the roads were drier than a popcorn fart, he drove 60 mph.  If it was deep in the heart of night and rain was pouring down in torrents, he drove 60 mph.  If we went out to a lease, he drove on those dirt lease roads just like he would on pavement.   The cows and other livestock went running for their lives.  Furthermore, he didn’t slow down for potholes, even if it had rained.  The mud and water flew everywhere.

One Friday evening after work we headed up to Taos, New Mexico to go snow skiing.   Leaving Las Vegas towards Taos the road heads up into the mountains.  It was narrow and winding, and because it had snowed a couple of days before was still icy and snow-covered in parts.  So here goes Huzzey, driving in his usual manner, oblivious to the road conditions.  Needless to say, we wound up in the bar ditch at one o’clock in the morning.

And that’s what I think is going to happen to the deficit hawks, as well as to the passengers – that’s us, by the way — riding along in the bus with them.

This entry was posted in Guest Blogger and tagged deficit hawks, inflation, one size fits all, sin. Bookmark the permalink.

7 responses to “In Search of Sin”