once again, is an accounting identity that provides a focus for macroeconomic analysis, explanation, and prediction by economists applying the Modern Money Theory (MMT) approach. The terms refer to flows among the three sectors of the economy in any defined period of time. Since we’re dealing with an accounting identity, the equation must always be valid.

In “A Plague On All Your Budgets,” I used the SFB model to show that all four sets of projections of budget deficits then current by: the Congressional Progressive Caucus (CPC), the CBO, the House, and the Senate; all implied austerity over a 10 year period assuming that the foreign balance (the US trade deficit ) would remain at 3% of GDP or greater. Why?

Simple. Look at the equation. If the foreign balance is greater than or equal to 3% of GDP in any year, then unless the Government runs a deficit of 3% or greater, the domestic private balance must be negative. That doesn’t mean every private sector person or organization would lose nominal financial wealth over that year, but it would mean that other than temporary and illusory financial gains due to credit bubbles and accompanying excessive evaluation of assets, the accumulation of financial wealth in the private sector would be a zero sum game, with some people and organizations winning and some losing every year the private sector balance was negative because the foreign balance was at +3% and the government balance was greater than -3%. If the Government ran a surplus of say 2% of GDP in any year, then private sector wealth would decline by 5% of GDP in that year. Of course, three years of that would be an economic catastrophe

Over a period of years, and again, neglecting the effect of credit bubbles, the result sooner or later has to be constriction in aggregate demand, economic stagnation, and recession or depression. In my previous post, I concluded that even under the most “liberal” 10 year projection planned by the CPC we could expect domestic private sector savings losses from 2016 on, and even perhaps in 2015 if there were a slight deviation in the projection. We could not have too many years of those losses without hitting another great recession.

So, the CPC budget may be better than others for a couple of years, but the danger in it is that if the CPC plan were taken seriously and the budget course projected was actually implemented, then it would be deterred eventually only by the inevitable crash. Hopefully this crash would occur in very short order, rather than being postponed by another credit bubble, only to be even more severe later on.

Since my earlier post, the White House has weighed in with its budget and 10 year projection. One item in the President’s budget has received an enormous amount of attention, and that is the chained CPI proposal. I’ve written rather trenchantly about that immoral proposal here and here. But, the overall implications of his austerity budget from a macroeconomic point of view haven’t been widely discussed. The Table below includes these new projections. 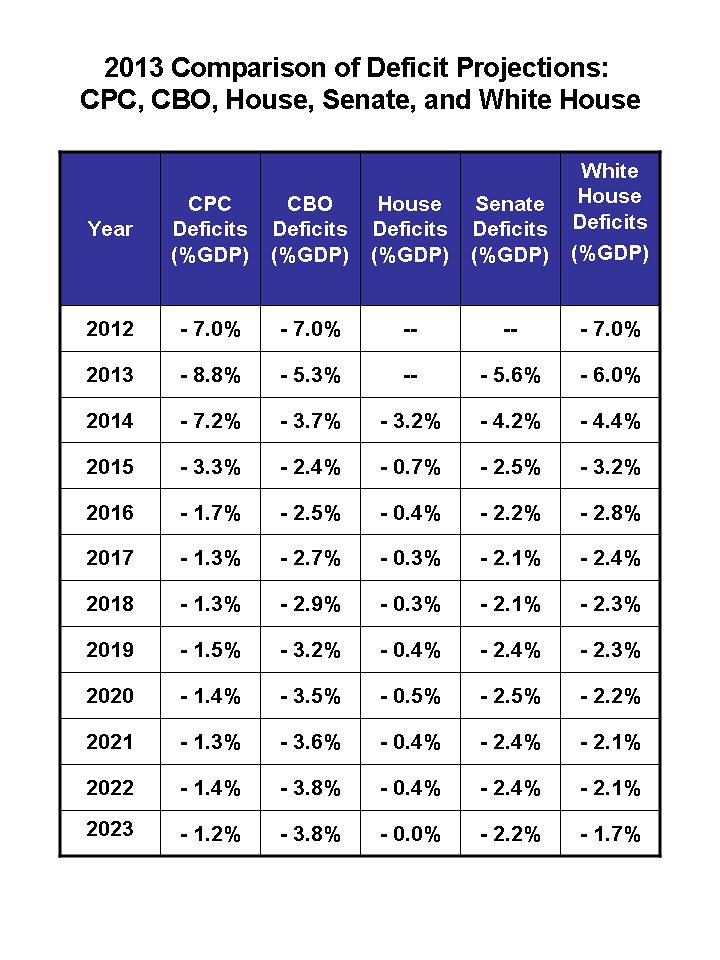 You can see that the White House budget has increasingly serious austerity implications as the years go by. In my previous post, I said that all four of the budget projections in the earlier table, if implemented, could only correspond to a bleak, stagnating economic future for the United States, with the House Budget producing the worst result by far. The addition of the White House budget as a fifth alternative doesn’t change that conclusion at all.

You can see that, with the exception of the CPC “back to work” budget, the President’s budget is the most expansive of all of them in 2013 – 2015. Still, it doesn’t allow for much private sector savings in a nation still recovering from the crash of 2008, and the CPC budget is quite a bit more expansive in these early years of the projections than the President’s plan. Beginning in 2016, however, the White House budget implies that private savings must be increasingly negative with greater and greater losses of private financial wealth to 2023. Its implications for negative savings in these years are less serious than the CPC budget, but, nevertheless, the fact that the White House either can’t or won’t recognize that its budget condemns the country to a recession within “the long depression” we are experiencing now, only makes the prognosis for the economy that much more serious, because it means that, like the Europeans, the White House is likely to double down on its austerity budget in the future if its deficit/debt projections are wrong. Like Herbert Hoover, and the Eurozone oligarchs, it will believe that “prosperity is just around the corner,” if only it stays the austerity course it has been increasingly setting.

Also, apart from the SFB model’s macroeconomic considerations and their significance for declining domestic private sector wealth over time, the situation looks even worse when we take economic and political power considerations and their likely effect on the economy into account. The history of the US since 1970 shows clearly that when the private sector gets a cold, the household sector gets pneumonia.

Big businesses, the financial sector, and wealthy oligarchs will use their economic and political power to see to it that their nominal financial wealth will continue to increase even as the private sector as a whole is losing 20% – 30% of its financial wealth, over the period of a decade. That will exacerbate the already ridiculous level of inequality we see in American society, and accelerate the movement toward plutocracy in America if we allow any of these austerity plans, or any variations between the “liberal” CPC proposal and the “right-wing” House proposal to be passed and implemented.

I’ll repeat what I said in my previous post with some small changes. All of these budgets are illustrations in fiscal fantasy, or perhaps I should say, in fiscal science fiction using bad fiscal science. In taking a fiscal approach based on reducing budget deficits, all the budgets are doing the wrong thing for the economy and the wrong thing for America. They are all fiscally unsustainable and fiscally irresponsible over a decade unless a credit bubble temporarily “bails out” the Government from experiencing the ultimate effects of its actions, allowing it to run unconscionably small deficits and pretend that everything is hunky-dory until the inevitable collapse of demand forces it to face reality.

The right approach to take to fiscal policy is to design and implement programs that will guarantee full employment at a living wage for everyone who wants to work full time and is able to do so. It is not to try to force small deficits or surpluses onto an economy that is not producing them out of its own robust activity.

Seeing this conclusion, I’m sure that some readers will ask: how the United States can afford to run deficit after deficit while continuing to accumulate its national debt? Well, first, it doesn’t have to accumulate and can even pay off its national debt without inflation. I’ve explained how it can do that in my new e-book on Fixing the Debt without Breaking America.

But second, even if the US does the politically unwise thing of continuing to accumulate a larger and larger national debt, when it can avoid doing that by taking advantage of its coin seigniorage authority, it can follow that debt accumulation course without either solvency or inflation problems. Scott Fullwiler has done a very good job of explaining how that can happen in a recent series of his, which concludes here.

Scott shows that deficits can be run indefinitely by nations with non-convertible, fiat currencies, with floating exchange rates, and no external debts in currencies not their own, without either solvency or inflation problems as long as the Government doesn’t deficit spend beyond full employment. That’s the kind of fiscal policy we should be making, not fiscal policy deliberately aimed at deficit reduction. So, to all the fiscal budgeteers in Washington looking to implement long-term plans for deficit reduction, including the President: a plague on all your budgets. You’re ending America, as we’ve known it!

60 responses to “Revisiting the Budget Plague”