While most commentary about government budgets has centered on the federal government, the real concern is the impact of the economic crisis on state and local government budgets. Unlike the federal government, state and local governments really do need tax revenue to finance their spending. As the economy has slowed, tax revenues have plummeted for these governments. All US states but one have constitutional requirements that dictate balanced budgets. However, even if this were not the case, states try to submit balanced budgets because markets punish deficits by credit downgrades and interest rate hikes. Hence, an economic slowdown forces states to tighten. The following graphics from today’s New York Times are telling: 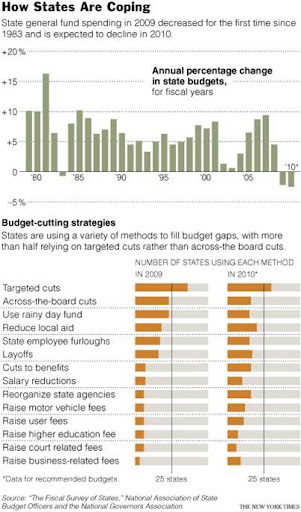 Since the Nixon era, Keynesian economic policy had fallen out of favor. Not only were “welfare” programs cut, but federal government also reduced its support for state governments through devolution (moving program responsibility to the state and local government level), it slowed growth of spending—especially on defense–and it increased payroll taxes, which reduced the role of the federal government while gradually tightening the fiscal stance. This finally led, over the course of the 1990s Goldilocks expansion, to sustained and large fiscal surpluses. In spite of the conventional wisdom, fiscal policy remained chronically too tight—and is probably still too tight but that is a topic beyond the scope of this blog.

Turning to the state level, states were faced with more responsibility, especially for social programs like welfare and Medicaid. However, all but one state is restricted by statutes or constitutions to running balanced budgets. The problem is that state revenue is strongly pro-cyclical, increasing in a boom and falling in recession. And this is a big problem when the states are increasingly responsible for types of spending that need to rise in recession—like welfare and Medicaid. What States typically do is to cut taxes and increase spending in a boom—which helps to fuel the boom—and then raise taxes and cut spending in a recession—adding to the depressionary forces that generate the recession. States have also come to rely more heavily on regressive taxes—especially taxes on consumption, while like the Federal government they give tax credits and inducements to encourage saving. This depresses spending, especially in recession when the regressive taxes on consumption are increased at exactly the time that households are trying to cut back spending to increase rainy day funds.

In addition to the current revenue problems faced by states, the second challenge, only dimly recognized, lies in the very real needs neglected by the federal government since the days of President Nixon: public infrastructure investment, public health services, pre-collegiate education, training and apprenticeships programs for those who will not attend college, jobs programs for those not needed in the private sector, and fiscal relief for state and local governments. So what we need now is a major federal government program comprised of three parts: immediate fiscal relief for state and local governments, longer term revenue substitution, and national infrastructure funding.

1. Immediate relief: To do immediate good, we need to ramp up federal social spending to relieve state budgets. Increased unemployment compensation and other forms of social spending are needed. It is also important to help state and local governments, which are reeling from the double whammy of higher expenses and plummeting tax revenues. They need at least $400 billion of “block grants”—perhaps based on population—to be spread among these governments. Maybe some of the money would be targeted (public infrastructure projects that were already underway, or are on the shelf and ready to go), some would go to Medicaid, and some would come with no strings attached.

3. Public Infrastructure: Elsewhere, I have argued that government spending needs to operate like a ratchet: increase in bad times to get us out of recessions, and increase in good times to generate demand for growth of capacity. What should we spend on? Infrastructure, social programs and jobs. Here I will just focus on infrastructure spending. We’ve got a $2 trillion public infrastructure deficit—just to bring America up to the minimal standard expected by today’s civil engineers. If anything, our relative dearth of public investment in roads, parks, schools, and energy infrastructure is even worse than it was when J.K. Galbraith brought it to our attention. The long fashionable belief that the market knows best now seems crazily improbable. Heck, the market couldn’t even do a relatively simple thing such as determine whether someone with no income, no job, and no assets ought to be buying a half million dollar McMansion with a loan to value ratio of 120%. Jimmy Stewart’s heavily regulated thrifts successfully financed more housing with virtually no defaults or insolvencies, and with none of the modern rocket scientist models that generated the subprime fiasco. Let the market mow lawns and determine toothpaste flavors; leave the important stuff—education, child and elder care, health care, military and security services, interstate highways and other social infrastructure and services–to government.

Posted on June 22, 2009 by admin | Comments Off on The Global Reserve Currency

From the Financial Times by Michael Hudson:

“For starters, the six countries intend to trade in their own currencies so as to get the benefit of mutual credit, rather than give it to the US. In recent months China has struck bilateral deals with Brazil and Malaysia to trade in renminbi rather than the dollar, sterling or euros.

Many foreigners see the US as a lawless nation. How else to characterise a country that holds out a set of laws for others – on war, debt repayment and the treatment of prisoners – but ignores them itself?

The US is the world’s largest debtor, yet has avoided the pain of “structural adjustments” imposed on other debtor nations. US interest rate and tax reductions in the face of exploding trade and budget deficits are seen as the height of hypocrisy in view of the austerity programmes that the “Washington consensus” has forced on other countries via the International Monetary Fund and other vehicles. The US tells debtor economies to sell off their public utilities and natural resources, raise their interest rates and increase taxes while gutting their social safety nets to squeeze out money to pay creditors.”

Comments Off on The Global Reserve Currency