Let’s look more closely at his Case #1, where the government deficit spends and “finances” that spending by selling bonds to commercial banks while the Fed does QE.  This is shown in Table 1, where we have T-accounts for the private sector (here referring to households and non-financial businesses), banks, dealers (which are assumed to purchase T-bills at auction and engage in open market operations with the Fed), the Fed, and the Treasury.

Assume the government spends $100 and receives taxes in the amount of $90, resulting in a deficit of $10.  The T-accounts for the T-bill sale, deficit spending, QE operation, interest on reserves (IOR), and reduced Fed profits returned to Treasury (as a result of IOR payment to banks) looks like this: 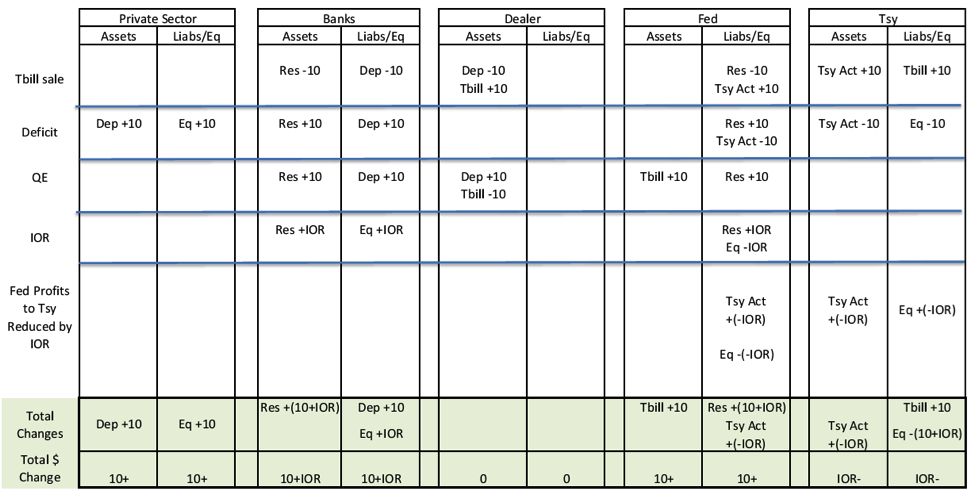 (To simplify an already complex (for some) exposition, we’ve assumed that the Tbill is purchased by the Fed without capital gain, but that wouldn’t have a material effect.)

Note what has happened in the final rows, where the Fed’s reduced transfer of profits is entered.  IOR payments from the Fed reduce its profits, all of which are transferred to the Treasury.  So, the actual transfer that would normally have occurred has been reduced by the quantity of IOR payments, shown in the T-accounts as (-IOR).  Note also that the change in net financial equity of the non-government sector (equity in the second to last row for the private sector, banks, dealers, which is 10+IOR) is necessarily the mirror image of that for the government sector (-(10+IOR)).

(The final row showing total $ changes in each sector’s total assets and liabilities/equity has the + or – after the number since that’s the only way to avoid an error term in Excel.)

Krugman’s Case 2 for the same $10 deficit is shown in Table 2—here we’ve assumed that the Fed provides the Treasury with an overdraft (currently not allowed by the Federal Reserve Act, which requires the Fed to make net purchases of Treasury debt in the “open market”—obviously a self-imposed constraint that has been lifted in the past).

Just as Krugman said, the results in the final two rows (total changes and total $ change) are exactly the same as in his Case 1, except that instead of the Fed providing the Treasury with an overdraft in Case 2, in Case 1 it purchased a Tbill in the open market from a dealer.  As Krugman suggests, there is virtually no macroeconomically significant difference between the Fed providing the Treasury with an overdraft versus the Fed owning the short-term debt of the Treasury—the Fed will return any interest it receives on the Tbill or the overdraft to the Treasury along with the rest of its profits.

This all confirms Krugman’s point – there is no meaningful difference between what the government is doing today (case 1) and what Market Monetarists are urging it to do via helicopter financing via direct money creation (case 2).  As Krugman says, “the results are the same.”

Still more interesting are the implications of this statement from Krugman:

It doesn’t take fancy analysis to make this point — just an acknowledgement that in financial terms, at least, the central bank is part of the government. The Fed, for example, remits the interest it earns on government debt to the government proper, keeping only that amount it needs for operations. So for the purpose of our analysis right now, we can use the term “the government” to include the central bank.

Consolidating the government (Fed + Treasury) balance sheets as Krugman suggests reveals why it makes no difference whether the government sells bonds with QE (case 1) or finances its deficit spending simply by creating new money (case 2).  To see why, look where you end up if you simply consolidate the Fed and Treasury balance sheets from the above examples.

Consolidation shows that once “the government” buys back its Tbill, it is as if it had never issued it in the first place.  In other words, Table 4 could essentially illustrate both of Krugman’s cases, since in either case all that remains on the balance sheet following a “helicopter drop” or a deficit with QE is newly created money (deposits for the non-financial private sector and reserves for the banking sector).

Consolidation gives rise to two further points that Krugman either misses or chooses not to develop.  We will refer to this as Case 3.

Case 3: The government runs a deficit, issues Tbills, but the Fed does not implement QE

Kelton (then Bell) showed in this article, written long before the Fed started doing QE (or running ZIRP), that issuing bonds versus QE or “printing money” doesn’t matter.  To illustrate, note that in Table 3 the government is issuing Tbills—but why should it?  Table 4 shows—as all economists know—that the government is the currency issuer, and so it obviously is not really “borrowing” even when it requires itself to issue Tbills.

This leaves us with a question—why then does a currency-issuing-government issue debt?  Here again, consolidation helps us understand.  Let’s reconsider Table 3 but reorder the deficit and Tbill issue as in Table 5:

Here we see perhaps more clearly that the deficit creates reserves and deposits.  Obviously this is an option available to a currency issuer without issuing debt first, whether via consolidation or via overdraft for the government’s Treasury to the government’s central bank if the government so allows.  But without IOR set at the targeted interbank rate, adding reserve balances causes the interbank rate to fall below the target rate, all the way to zero.  The only alternative is to drain the reserve balances through sale of (in this case) Tbills if the government (or central bank if we aren’t consolidating) desires a positive interbank target rate.  Thus, as Abba Lerner put it, the purpose of bond sales for a currency issuer isn’t “financing” but rather a decision that the public should hold bonds rather than reserve balances earning interest (i.e. IOR).

This (Case 3) plus Krugman’s two cases demonstrate Fullwiler’s point, which is that because neoclassical economists believe that both IOR at the target rate and an interest rate target at zero (either of which means that Tbills and “base money” are perfect substitutes) stop QE or “monetization” of deficits in their tracks, there is no real-world scenario in which either is more inflationary than bond sales.  In other words, because there is no difference between bond- and money-financed government deficits, there is no reason for the government to sell bonds at all.  We can stop today.  No further increases in the debt and no unnecessary and counterproductive debt ceiling drama.

Furthermore, as Fullwiler later argued, there is no need for so-called coordination of monetary and fiscal policies for “money-financed deficits,” since this again operationally necessitates IOR at the central bank’s target rate (assuming the central bank’s target rate is above zero) which is the functional equivalent of simply issuing a Tbill in terms of the interest on the national debt.  To illustrate this, Table 6 separates the Treasury and Fed while presenting all the transactions for Case 3.

From the second to last row (total changes), the only difference between Table 6 (unconsolidated Case 3) and Table 2 (Case 2) is interest on the Tbill in the former and IOR = Fed’s target rate in the latter.  And of course, the Tbill and the Fed’s target rate will be very close via arbitrage.

Of course, none of this means that a currency-issuing government should run large deficits, only that it can when necessary.  And it obviously can do so without worrying about bond vigilantes—again Tables 3, 4, 5, and 6 show that the interest rate on the national debt for a currency-issuing government is either IOR—a policy rate—or the Tbill rate, which arbitrages with the policy rate.  Splitting up the central bank and Treasury doesn’t change this, and neither does the self-imposed requirement that the Fed not provide the Treasury with overdrafts—which simply means that the Treasury can issue debt at roughly the Fed’s target rate via Tbills.

Thankfully, Krugman is helping clear through decades of confused teachings in macroeconomics textbooks.  While the U. S. Treasury and the Federal Reserve are obviously separate institutions within the government, Krugman’s analysis shows that it can be quite illuminating to look at the effects their operations using a consolidated balance sheet.  For example, we see the case for helicopter financing of government deficits has been much ado about nothing.  Indeed, the main advantage of Case 2 is not that it provides a greater boost to the monetary base but that it would relieve the government from the practice of selling bonds altogether. In other words, the main advantages of direct money creation are political rather than economic.

75 responses to “Krugman, Helicopters, and Consolidation”