Types of Spending, Methods of Filling the Public Purse and Inflation/Deflation

That framework is reflected in the first column of the table where all but the top row names the categories in Scott’s framework. The table also expands the framework a bit, however. Scott’s post compares using PCS to using debt instruments to add reserves to the Treasury General Account (TGA), the Treasury’s spending account, to make the case that PCS, in, and of itself, won’t add to inflation. I want to expand the perspective a bit by adding a comparison of both these alternatives with the alternative of allowing Treasury to close any gap between the tax credits it receives and the spending appropriated by Congress by creating in its own reserves in the TGA, either directly, or by sending an instruction to the Fed to credit the TGA with the particular amount of reserves necessary to do the deficit spending. So, here’s the table. 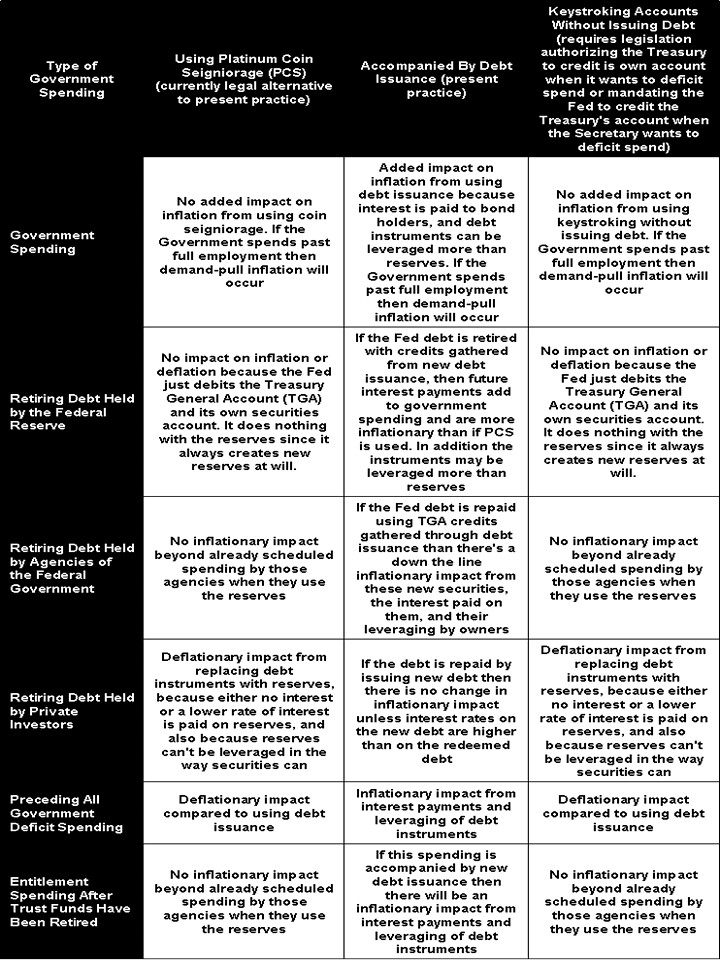 The conclusions in this table are based on very few ideas:

1. There’s no way reserves paid by the Treasury to redeem old debt can be inflationary unless it is spent into the economy, because there’s no channel for causal impact at all.

2. So, debt repaid to other Government agencies and to the Federal Reserve Banks cannot be inflationary beyond inflation tendencies already built into the regularly scheduled spending into the economy of the agencies involved.

At the end of the 2012 fiscal year the total of Federal Reserve and Federal Agency held debt including Trust Funds was $6.4 Trillion (p. 51). So immediate redemption of that debt would reduce the debt subject to the limit by just under 40%.

3. Debt instruments in the private sector are a form of financial asset that is more inflationary than reserves in checking or savings accounts.

The classical Quantity Theory of Money (QTM) says that increasing the amount of money in circulation is inflationary. But, much empirical evidence shows that this is wrong, and that the expansionary factor in modern economies is increasing Net Financial Assets leading to increased demand beyond the productive capacity of the economy to absorb. NFAs can include income in the form money; but when money is exchanged for an asset of equal value as happens when a security is redeemed, then that’s not inflationary, and may even be deflationary because of the ending of interest payments and securities leveraging that follows if no compensating debt issuance happens.

Here’s Scott Fullwiler’s reasoning on why this is so:

As I previously explained, this is the operational equivalent of quantitative easing (QE). The purchase of Treasury securities by the Treasury would retire the securities and leave banks holding reserve balances. But, as I explained in the previous post, “Banks can’t ‘do’ anything with all the extra reserve balances. Loans create deposits—reserve balances don’t finance lending or add any ‘fuel’ to the economy. Banks don’t lend reserve balances except in the federal funds market, and in that case the Fed always provides sufficient quantities to keep the federal funds rate at its target—that’s what it means to set an interest rate target.

And on the subject of the deposits created by the debt redemptions he goes on to quote his previous post on QE3: linked just above:

“First, sellers of bonds were always able to sell their securities for deposits with or without the Treasury’s intervention given that there are around 20 dealers posting bids at all times.  Anyone holding a Treasury Security and desiring to sell it in order to spend more out of current income can do so easily; holders of Treasury Securities are never constrained in spending by the fact that they hold the security instead of a deposit. Further, dealers finance purchases of securities from both the private sector and the Treasury by borrowing in the repo market—that is, via credit creation using securities as collateral. This means there is no ‘taking money from one person to give it to another’ zero sum game when bonds are issued (banks can similarly purchase securities by taking an overdraft in reserve accounts and clearing it at the end of the day in the federal funds market), as what in fact happens is that the existence of the security actually enables more credit creation and is known to regularly facilitate credit creation in money markets that are a multiple of face value. Removing the security from circulation eliminates the ability for it to be leveraged many times over in money markets.

“Third, these operations by the Treasury create no new net financial assets for the non-government sector (and can in fact reduce its net saving by reducing interest paid on the national debt as bonds are replaced by reserve balances earning 0.25%).  Any increase in aggregate spending would thereby require the private sector to spend more out of existing income, or to dis-save, as opposed to doing additional spending out of additional income. The commonly held view that ‘more money’ necessarily creates spending confuses ‘more money’ with ‘more income.’ QE—whether ‘Fed style’ or ‘Treasury style’—creates the former via an asset swap; on the other hand, a true helicopter drop would create the latter as it raises the net financial assets of the private sector. Again, ‘money’ doesn’t spend itself. . . .

4. Demand-pull inflation cannot be caused by Government deficit spending, unless Congress appropriates and the Treasury spends, past the point of full employment. Whether inflation or hyperinflation happens generally has nothing to do with the method used to add electronic reserves to the TGA; but as one approaches full employment Federal interest payments and private leveraging of Federal securities resulting from debt instruments are more likely to initiate inflation than using either of the other two methods.

5. Using PCS to fill the TGA with reserves is very similar to the third method of giving the Treasury the authority to mandate the Fed to add reserves to the TGA upon instruction from the Treasury. In fact, functionally, depositing a high value platinum coin into the US Mint’s Public Enterprise Fund Account, and then “sweeping” the seigniorage into the TGA is virtually equivalent to instructing the Fed to add reserves to the TGA. The “big coins” are just a different form of message than a Treasury instruction would be. But the functional financial content of the different kinds of messages is virtually the same. They both mandate the Fed to create the amount reserves specified in the message.

At Bottom A Political Choice

Some readers may look at this argument and agree with everything I’ve said and still prefer to deficit spend only after issuing and selling debt, rather than using either PCS or direct Treasury instructions. They might argue that even if it is true that the other methods are less inflationary, the method of debt issuance 1) is not so inflationary as to create a problem and 2) creates a political climate among the public and in Congress, that restricts government deficit spending, and keeps it sufficiently in check, that we almost always have a good deal less than full employment, and therefore never risk serious demand-pull inflation. And that’s just the way they like it!

Then I have an answer for them. And I’ll begin by quoting Bruce Springsteen and Randy Wray.

And then I’d go on to say this.

Your method of filling the public purse through selling debt to accumulate credits in the TGA, may provide an extra hedge against inflation by fooling people into thinking we are running out of money and that unemployment and austerity are just the price we have to pay for insuring ourselves against inflation, but that method is anathema to me because it creates a political barrier to taking care of own, and undermines our political will to take care of our own and one another.

The 28.5 million who want full-time jobs at a living wage are our own, as much as you. And they have a right to a Federal Government that will use its full power to see to it that they have full time job offers at a living wage that they can be proud of. And that, in the final analysis is why PCS, and direct Treasury instruction of the Fed, are better methods of filling the public purse than your method of using debt instruments.

The method of direct Treasury instruction of the Fed, isn’t open to us without legislation. But PCS is available now to fill the public purse. We ought to fill it, the TGA, using PCS, with $60 T in electronic credits immediately, so no one can be fooled again by people saying that we can’t afford something for sale in our own currency.

We don’t need to have any public debt subject to the limit if we don’t want it. And we always can have enough money in the public purse to afford to take care of our own, if Congress will only represent most Americans and legislate the necessary programs, while appropriating the necessary funds to open the purse strings of that full purse the Treasury will have! At bottom, it’s a political choice; and, if we want to be real Americans, then we must choose to take care of our own!