ADVICE TO PRESIDENT OBAMA AND PRIME MINISTER BROWN: Tell the IMF, the European Commission, and the Ratings Agencies to Take a Hike

In recent days, articles in Der Speigel, the NYTimes, and the AP have all highlighted Neoliberal commentary warning of the dangers of growing budget deficits in the wealthiest nations—specifically in the US and the UK. 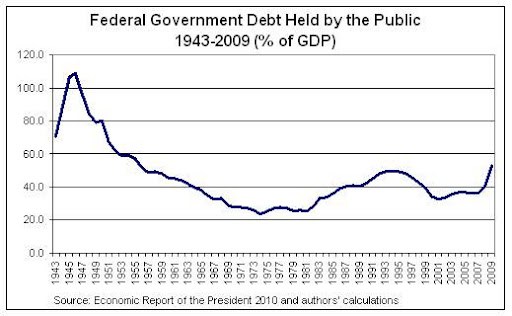 Note that during WWII the government’s deficit (which reached 25% of GDP) raised the publicly held debt ratio above 100%– much higher than the ratio expected to be achieved by 2015 (just under 73%). Further, in spite of the warnings issued in the Reinhart and Rogoff study, US growth in the postwar period was robust— in fact it was the golden age of US economic growth. Ironically, this is even acknowledged in the report by the IMF’s Lipsky—who noted that the average ratio of government debt to GDP in the advanced countries will reach the postwar 1950 peak of somewhat more than 75%. Again, misfortune did not befall those big government spenders after WWII. Actually, debt ratios came down over the postwar period as relatively robust growth grew the denominator (GDP) relative to the numerator (government debt).
Indeed, robust growth reduces budget deficits by raising tax revenue and reducing certain kinds of government spending such as unemployment compensation. That was exactly the US experience in the postwar period. The budget deficit is highly counter-cyclical, and will come down automatically when the economy recovers.
The claim made by Moody’s that growth will not reduce debt ratios does not square with the facts of historical experience and must rely on the twin assumptions that growth in the future will be sluggish and that government spending will grow relative to GDP. However, such an outcome is inconsistent: if government spending grows fast it raises GDP growth and hence tax revenues, reducing the budget deficit. This is precisely what has happened in the US over the entire postwar period. It is only when government spending lags behind GDP growth by a considerable amount that it slows growth of GDP and tax revenues, causing the budget deficit to grow. What Rogoff and Reinhart do not sufficiently account for is the “reverse causation”: slow growth generates budget deficits. This goes a long way toward explaining the correlation they find between slow growth and deficits: as economists teach, correlation does not prove causation!
Actually, there are always two ways to achieve the same budget deficit ratio: the ugly (Japanese) way and the virtuous way. If fiscal policy remains chronically too tight even in recession, economic growth is destroyed, tax revenues plummet, and a deficit opens up. So far, that is—unfortunately—the US path in this recession, a path already well-worn by two decades of Japanese experiments with belt-tightening. The alternative (let us call it the Chinese example) is that a downturn is met with an aggressive and appropriately-sized discretionary response. In that case, growth is quickly restored, tax revenue begins to grow, and the budget deficit is reduced.
We emphasize that the deficit outcome is of no consequence for a sovereign nation. What is important is that the “ugly” Neoliberal path means chronically insufficient demand, high unemployment, and lots of suffering. The virtuous path—which is always available to a sovereign government—means less loss of output and employment, and relatively rapid resumption of economic growth. So it is not the deficit outcome that matters, rather it is the real suffering imposed by slow growth that results when fiscal policy is too tight.
In conclusion, the Neoliberal agenda would impose the ugly path on the US and UK. President Obama and Prime Minister Brown should tell the Neoliberals to take a hike.