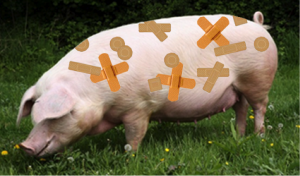 Specifically, the most persistent and destructive myth of our current political times is that the U.S. government must collect taxes from its citizens—or borrow Dollars from them—in order for the federal government to have Dollars to spend. The simple mathematics of this story are as staggeringly improbable as the farmer’s attempt to eat his pig without killing it: The annual gross national product (GDP) of the U.S. citizens is around $15 trillion—but how much of that can the federal government reasonably tax, on average, without so severely dampening household buying power that the economy contracts? Twenty percent, maybe? But that only generates $3 trillion in annual taxes—and Congress has already committed the federal government to spending $3.6 trillion! So there’s a shortfall of $600 billion—money the government (since it has no other source of revenue) will have to borrow. And so it goes, year after year, building up an enormous “deficit” which soon has an an annual interest payment that eats up most of the tax revenues, requiring the government to borrow even more money to cover its spending requirements. And this calculus doesn’t even factor in the spending that’s going to happen when the baby-boomers begin (very soon) to retire in masses, demanding their Social Security payments and Medicare services while no longer paying FICA taxes. Not to mention the fact we need to repair or rebuild some 18,000 bridges, along with a few other pieces of critical infrastructure (like water-mains and sewer plants) that folks regularly utilize to live their everyday American lives. It’s pretty clear, in other words, the poor pig is close to death, and we’re not even close to paying for all the things we really need, or would like to have as a prosperous nation.

So what, actually, is wrong here? Is it possible that, like the farmer, our political and economic leadership—and the mainstream media that keeps us “informed”—are confused about the true nature of the federal government’s resources? Hard as it is to believe, the unavoidable answer is: “Yes.” There are two deep misunderstandings about our sovereign monetary system which support the myth, and which the mainstream leadership and media apparently hold as unquestionable doctrine. The first is that “banks create the nation’s money”; the second is that “printing Dollars creates inflation.” Let’s examine the two misunderstandings in turn:

If you hold the belief that banks create the nation’s money when they make loans—the loans being used to generate the profits, interest and wages which create the citizen’s wealth—then you must logically conclude that, in order for the sovereign government to obtain some of those U.S. Dollars for its own spending, it has no choice but to obtain the necessary Dollars from the citizens either through taxation, or through borrowing. The sovereign government, from this perspective, has no other significant source of revenue.

While this seems like a reasonable perception, it conveniently overlooks the actual mechanisms of the U.S. Reserve Banking System. In fact, when a bank makes a loan, the “dollars” it creates and deposits in the borrower’s account are not sovereign U.S. Dollars, but are bank I.O.U.s. If the borrower decides to withdraw the bank I.O.U.s from his account (through the ATM, for example), the bank promises to instantly convert those I.O.U.s into the real thing: sovereign U.S. Dollars. And where does the bank get the sovereign U.S. Dollars it needs to make its promised conversion? It borrows them from the Federal Reserve—the Central Bank of the sovereign government—which issues the necessary real Dollars and deposits them in the bank’s reserve account at the FED. In other words, it is the sovereign government (acting through its Central Bank) which creates all of the U.S. Dollars that exist in our economy. By law, anyone else who tries to create a sovereign U.S. Dollar is a counterfeiter. While more complicated layers and actions are involved, this is the essence of how the Reserve Banking System and the U.S. monetary system function—with the critical point being that it is the sovereign government which issues the U.S. currency. (It literally can come from no other source!)

This, then, raises a crucial question—again, conveniently ignored by the mainstream doctrine and media: If it is true the sovereign government has the exclusive power to issue U.S. Dollars simply by issuing them, then why is it logical for the sovereign government to collect taxes? What does it need the tax dollars for? If it needs to spend a Dollar, why doesn’t it simply issue a Dollar and spend it? The truth, which the political and economic leadership refuses to acknowledge, is that this, in fact, is exactly what does occur: The sovereign government issues Dollars, and then spends those dollars to buy from the citizens goods and services which create a public benefit. (Like a satellite GPS system, for example.) It then turns around and collects some of those Dollars back in taxes. But why? Obviously, it doesn’t need those Dollars for spending, so why does it collect them?

The answer is probably the most ingenious social tool every invented—and is likely the chief reason why human civilization, with its unique system of monetary economics, has grown to dominate the ecosystems of the Earth. The “tool” works like this:

(1)  A sovereign power declares that its citizens must, on a regular basis, pay taxes or face imprisonment. (This might seem mean-spirited, but the tool doesn’t work otherwise.)

(2)  The sovereign then declares that the recurring tax must be paid using money which the sovereign, itself, has the exclusive right to issue. (This is, by definition, “fiat money.”)

(3)  Because the citizens need the sovereign money to pay their taxes and avoid prison, they are then willing to provide real goods and services to the sovereign in exchange for the money.

(4)  The sovereign, therefore, is now able to obtain real goods and services in exchange for something of which it has an infinite supply—the money it has the exclusive right to create.

(5)  The sovereign money quickly becomes the “legal currency” and “unit of account” for all transactions within the society operating under the sovereign’s power.

The second misunderstanding follows directly from the first: Since the very nature of a sovereign fiat monetary system is the issuing (or “printing”) of currency, it is illogical to suppose that this, in itself, creates inflation. It is patently true that if the amount of currency significantly increases relative to the number of goods and services available to be purchased, the currency will be devalued by rising prices. It is obvious, however, that two issues are at play and not simply one: (a) the amount of currency and (b) the number of goods and services. Inflation, therefore, can be generated by either of these elements becoming unbalanced—and, in fact, the two most frequently cited historical examples of hyper-inflation were instigated not by the exuberant printing of sovereign money, but rather by a sudden and severe drop in the availability of goods and services. Here they are:

Germany after World War I: What actually happened? Germany’s industrial heartland, the Ruhr, was shut down by the German workers protesting the imposition of war reparations by occupying Belgian and French troops. The German government continued to issue currency to pay the workers—to support their protest—and the amount of currency relative to the goods it could purchase was soon sky-rocketing out of balance. Zimbabwe in 2008: What actually happened? A civil war destroyed the country’s industrial capacity and a land reform program transferred ownership of a highly productive agricultural sector to a segment of the population with no farming experience. With the collapse of both industry and food production, there were fewer and fewer goods and services to purchase and the value of the Zimbabwean Dollar collapsed.

In each of these cases, the sovereign government was forced to inflate the face “value” of the currency it was issuing in a desperate race to keep up with its falling value—but in each instance what instigated the hyper-inflation was a sudden and rapid decline in national productivity.

Those who claim that the “printing” of sovereign money will inevitably lead to inflation are, therefore, either being disingenuous or misinformed. The more important issue, by far, is whether and how the sovereign money issued is actually used by the citizens to create new goods and services. As long as there is capacity for that to occur—under-utilized labor, materials and technology—the issuing and spending of sovereign Dollars to employ those resources will not cause inflation but, instead, will grow the economy and reduce unemployment.

In conclusion, here’s a quick experiment that any curious journalist can do in just a few moments to demonstrate the underlying reality of sovereign fiat monetary systems. Hopefully, it might engender a journalistic interest in further investigating the impossible and self-defeating mathematics of the mainstream doctrine.

Looking simply at the balance sheet, it appears the sovereign has a “deficit” of $3 million. The logic of mainstream doctrine tells us that “deficit” has to be recovered either through taxes or borrowing. But in what sense does it represent something that needs to be “recovered” or “replaced”? What happens if the sovereign doesn’t even try to recover or replace those Dollars? Obviously, nothing (bad) happens at all: The citizens have $3 million in wealth that they can use to buy cars and houses and groceries; a bridge is made safe again to drive across; the sovereign has $3 million less of that which it has an infinite supply of: sovereign U.S. Dollars.

If, on the other hand, we insist that the sovereign’s “deficit” be recovered, what happens? If the spending is “replaced” by taxation—with the sovereign collecting $3 million back from the citizens, the citizen’s side of the balance sheet would be zero again—(they’d be broke and unlikely, therefore, to buy either cars or houses.) If the spending is recovered by borrowing the $3 million from the citizens, the citizens will have simply traded their $3 million in Dollars for $3 million in U.S. Treasury bonds which the sovereign will then pay them interest on with currency it issues from its infinite supply. Which leads to a final question an aggressively curious journalist might care to investigate: Why does the U.S. sovereign government borrow trillions of the Dollars which it has, itself, created in the first place? To begin researching that answer I’d suggest beginning here.

61 responses to “Doctrine of Mathematical Impossibilities”