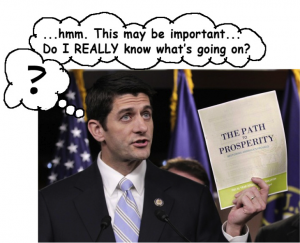 This reality can be clearly observed by watching carefully what happens when the Federal government spends. Let’s say the government buys $100 worth of Medicare services from Dr. X. If you look casually at this transaction, it appears that the U.S. Treasury makes an electronic payment into Dr. X’s account at Chase Bank and, just as we’d expect, the doctor’s Chase account increases by $100, and the Treasury’s account (at the Federal Reserve) decreases by $100. If you look a bit closer, however, you’ll see that something else happens as well: the Treasury simultaneously makes ANOTHER payment of $100—this one into the “reserve” account that Chase Bank is required to maintain at the Federal Reserve. Why does that happen? And why does it appear the Treasury has paid the $100 twice?

Bank dollars are created in the same way: by declaration. Chase Bank simply declares that it is depositing $100 in Dr. X’s Chase account, and the 100 bank dollars appear in the account. But the bank dollars created by Chase Bank have an operationally crucial relationship to the sovereign dollars created by the Federal government: Bank dollars are, by law, CONVERTIBLE on demand to sovereign dollars. This is why people, like Dr. X, are perfectly happy to have bank dollars in their accounts—because they know that, any time they want, they can convert them to the “real thing.” (They do this every day by withdrawing cash from ATM machines: cash dollars are sovereign U.S. dollars.)

Reality No. 2:  Sovereign Dollars have to Pre-Exist bank dollars

The 100 sovereign dollars in Chase Bank’s “reserve” account, however, are not just “covering” the 100 bank dollars in Dr. X’s Chase account—Chase also “leverages” those reserve dollars by extending credit to other bank customers. Customer Y wants to buy a car, for example, and Chase Bank loans her $5,000 to make the purchase. After the loan agreement is signed, Chase once again simply key strokes 5,000 new bank dollars into customer Y’s Chase account. They are able “safely” to do this because they know that, under normal circumstances, only a small percentage of their bank dollars actually get converted to sovereign dollars; as long as they maintain that percentage of sovereign dollars in their “reserve” account, they’ll be able to fulfill their promises to make the conversion.

But rather than getting bogged down in the operational issues of bank “leveraging”, let’s focus on the key point we want Congressman Ryan to understand: If indeed it is true that the creation of bank money is, by law, dependent upon the existence sovereign money (i.e. is convertible, on demand, to sovereign money) this means, by logic, the sovereign money has to exist FIRST and then the bank money can be created. Since it can’t be the other way around, it is impossible to argue that the Federal government could ever be dependent upon collecting or borrowing dollars created by the U.S. banking system in order to pay for its sovereign spending.

Reality No. 3:  The Federal government HAS to deficit spend.

The Federal government creates a “deficit” when it spends more sovereign dollars than it collects back in taxes. In Paul Ryan’s mind, the national “deficit” is symptomatic of a terrible flaw in the American character—a flaw he claims will lead our country to insolvency and bankruptcy. Applying the operations of the “reserve” banking system, however, it is easy to see how dangerously confused the congressman actually is. To see this, let’s go back and add a tax transaction to our simple example of the government’s buying Medicare services from Dr. X:

The Federal government has spent 100 sovereign dollars—transferring them to Chase Bank’s “reserve account”. These dollars are now available to fulfill Chase’s promise to convert its bank money to sovereign money. Chase creates 100 corresponding bank dollars and deposits them in Dr. X’s Chase account, concluding the government’s purchase. Now the government levies a tax on Dr. X. Let’s say the tax is 25% of income. Dr. X writes a check on his Chase account to the U.S. Treasury for $25. Those bank dollars are removed from Dr. X’s account, and a corresponding number of sovereign dollars are transferred from Chase’s “reserve” account to the Treasury’s account at the Federal Reserve—and Dr. X’s tax liability is extinguished.

As described above, the Federal government has just created a “deficit” of $75 (it spent 100 sovereign dollars and collected back 25 in taxes.) Let’s imagine those were the only Federal spending and taxing transactions that occurred in a given year. At years end, then, the government has a “deficit” of $75, Chase Bank has a “reserve” account containing 75 sovereign dollars, and Dr. X has a Chase account containing 75 bank dollars. Chase still has “reserves” to leverage for extending credit, and Dr. X still has bank dollars to pay for living expenses and investments.

Now let’s imagine that Congressman Ryan’s Holy Grail—a “balanced budget”—is achieved. This means the Federal government has to collect taxes EQUAL to its spending. It has paid Dr. X $100 dollars for Medicare services, and now it levies a tax on Dr. X for $100. Dr. X writes a check on his Chase account to the U.S. Treasury for $100. The dollars are subtracted from his Chase account, and 100 corresponding sovereign dollars are transferred from Chase’s “reserve” account to the Treasury’s account—and Dr. X’s tax liability is extinguished.

Again, if these were the only Federal spending and tax transactions for a given year, what are the year-end positions? The government’s deficit is zero. (Thank god we finally got spending under control!) Chase Bank’s “reserve” account is also zero—it now has to rely on “reserves” it built up in previous years in order to leverage its bank loans. Dr. X’s Chase account is also zero—he now has to dip into savings he built up in previous years to pay his living expenses and make investments. Even worse, he may have to borrow bank dollars from Chase Bank just to maintain the lifestyle he had created the year before—and to meet this new demand for borrowing, Chase Bank may begin to “stretch” the percentage of bank dollars it can safely leverage against its “reserves” which means at some point, if this continues, a “banking crisis” is inevitable: Chase is suddenly unable to fulfill its promise to convert bank dollars to sovereign currency. In other words, the Federal government HAS to deficit spend to keep the banking industry “safely” leveraged.

This entry was posted in J. D. Alt and tagged reserve banking, ryan. Bookmark the permalink.

37 responses to “What Does Paul Ryan NOT Understand about Reserve Banking?”