Every month this year (perhaps with the exception of May) economic forecasters were stunned by the unexpectedly high unemployment numbers. Today the Bureau of Labor Statistics reported that in June employers shed 467,000 jobs, pushing the unemployment rate to 9.5%, a 25-year high. With an ever gloomier jobs picture, President Obama’s economic team has started to change its tune with respect to the promised job creation. The first economic report on the job impact of his recovery plan carefully phrased the objectives to include “creating or saving” at least 3 million jobs by the end of 2010. Those early projections called for peak unemployment of 8% in the third quarter of this year, far less than today’s actual unemployment rate of 9.5% 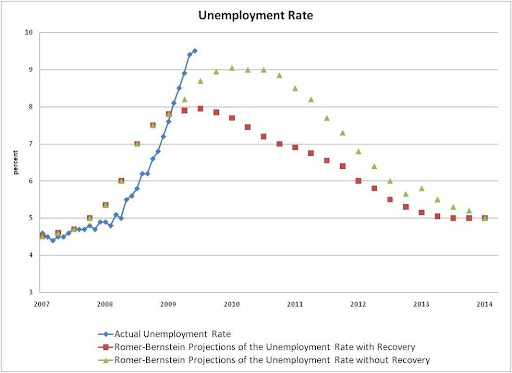 Source: BLS, Romer and Bernstein, The Job Impact of the American Recovery and Reinvestment Plan
Many economists now believe that the unemployment rate will soon move into double-digit territory. Similarly, reversing her original projections, President Obama’s Chair of the Council of Economic Advisers, Christina Romer, also expects unemployment to keep rising well into next year, even as the economy recovers or at least until it generates 2.5% of GDP growth (a number which Robert Reich, former Labor Secretary under Clinton, believes is closer to 4.5%).
Now, there is something very troubling with the argument about “saving” jobs. It is not exactly solid evidence that fiscal policy is working. While most economists agree that job losses would have been much worse in the absence of a government stimulus, there is no way of knowing exactly how many more losses those would have been. Similarly, it is very difficult to make the case that in fact 3-4 million jobs have been saved. Is this the incontrovertible evidence we should expect from the Recovery and Reinvestment Act?

Secondly, trying to hit a particular growth rate in GDP is like shooting in the dark. No one can be certain that by 2010 we can reach the coveted 2.5% (or 4.5%) in GDP growth, which will hopefully deliver the job creation President Obama has promised. In an earlier post , I have explained that relying on GDP growth to produce the desired employment numbers is not only a political gamble but a backward way of thinking about fiscal policy. Although many call this a Keynesian approach, it has little to do with what Keynes had in mind. For Keynes targeting the unemployed directly and hiring them into public works was the way to go.

Christina Romer last week stated that her economic team has assumed a “posture of watchful waiting” and that, if unemployment remains persistently high, “more targeted interventions” may be necessary.

Which immediately begs the question: With already very troubling unemployment numbers month after month, what are we waiting for and why?

Creating jobs, a lot of jobs, is what is needed. Over the past 12 months the economy has lost nearly 5.7 million jobs. There are 9.65 million people who are unemployed today and another 2.2 million who are marginally attached (i.e. who want and are available to work but are not counted as unemployed because for reasons such as discouragement or family responsibilities, have not been able to look for a job in the last 4 weeks). This means that the original goal of creating or saving 3-4 million jobs is far too timid—these objectives too must be redefined with the economic realities.

Mark Thoma has also argued that we cannot wait any longer and must begin to maximize employment over the coming months.

Until there is a meaningful improvement in the unemployment rate, the Obama recovery plan may very well be seen as a failure, even if growth stabilizes. Jobless recoveries cost parties their midterm and presidential elections and the Obama administration is running the risk of squandering a window of opportunity to turn the economy around as boldly and as quickly as it can.

An immediate targeted intervention is precisely what Keynes would have prescribed—ambitious and creative public works projects that put the unemployed men and women to work.
A number of us on this blog have long advocated large scale New Deal-type programs. If President Obama expects to meet (and possibly exceed) his job promise, targeted intervention in the form of direct job creation is in order. If he wishes to create 4 million jobs, he can immediately put 4 million people to work (recall that most New Deal programs were up and running in just a few months). If he wishes to employ 8 million people, then he can meet his promise and beat everyone else’s expectations.

18 responses to “Bring the Stubborn Unemployment Numbers Down Now”