Another Take on the Financial Balances

First, regarding the identity itself, for a domestic economy we have, in terms of economic flows:

With PDFB the private domestic financial balance, RWFB the financial balance of the Rest of the World, and GFB the government financial balance. This identity holds all the time, in any domestic economy (in a world economy RWFB disappears). For economic analysis, it is insightful to arrange this identity differently in function of the type of monetary regime.
In a country that is monetarily sovereign the federal government has full financial flexibility. By monetary sovereignty, one means that there is a stable and operative federal/national government that is the monopoly supplier of the currency used as ultimate means of payment in the domestic economy, and that the domestic currency is not tied to any asset (like gold) or foreign currency. Other posts have already explained the implications of this in terms of federal government finance (taxes and T-bonds do not act as financing sources for federal government spending, the federal government always spends by creating monetary instruments first, etc.) and banking (bank advances create deposits, credit supply is endogenous and is created ex-nihilo (i.e. banks do not need depositors to be able to provide an advance of funds to deficit spending units), higher reserve ratios do not constrain directly the money supply process in a multiplicative way, etc.). All this also has implications in terms of accounting and in terms of modeling.

First, in terms of accounting identity, in a monetarily sovereign country, the government financial balance (GFB), through the federal government financial balance, is the ultimate means to accommodate the changes in holdings of the domestic currency by other sectors (private domestic sector and the Rest of the World). This means that, for a monetarily sovereign country, the most insightful way to arrange the national accounting identity is:

Fiscal balances for the United State (billions of dollars) 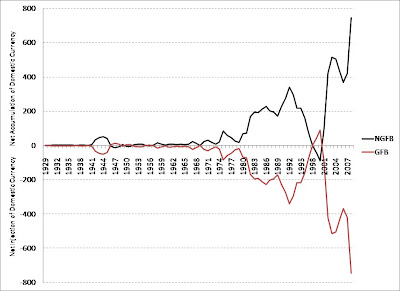 This also works the other way around, i.e. if the Rest of the World disaccumulates the domestic currency the government must be the ultimate acquirer of this domestic currency and so must run a surplus if the private domestic sector does not accumulate it in a large enough quantity.
Once it acquires the domestic currency, the government may destroy them (federal government has huge shredders or they are deleted from the computer memory), or store them into a safe/computer for later use (especially true for state and local governments). Destruction of bank notes occurs usually because they are in bad shape. Hundreds of millions of dollars worth of bank notes are destroyed every month at the Fed banks in the US; then they are used as compost (during my last tour of the San Francisco Fed last March, I was told that about $56 million worth of bank notes are destroyed every day at the SF Fed, and then are spread on the fields of California). If you go visit a fed bank this will be the main attraction.

For the moment, we stayed at the level of the identity, which basically tracks where the domestic currency comes from and where it goes. Every dollar comes from somewhere and must go somewhere. There is no dollar floating around that is not held by a sector. No desire/behavioral equation were included in the analysis above. However, even that basic identity provides us a powerful insight. Indeed, it shows us that it is impossible for all sectors to be in surplus; at least one of them must deficit spend and usually it is the government sector because of its monetary sovereignty. The reverse is also true, i.e. not all sectors can be in deficit at the same time; at least one of them must be in surplus (usually the private domestic sector). As Randy noted in a previous post, this is probably not understood well; even the Wall Street Journal did not make the connection in early the 2000s between the federal government surplus and the households’ negative saving. It is often assumed that if they wish, all sectors could be in surplus; one just needs to work hard enough at it (note that this is one of the promises that is always made during presidential campaigns: “we should save more, reduce our trade deficit and reach a fiscal surplus”). Economic reality does not work that way.

In terms of the model (where one includes desires and so behavioral aspects as well as an explanation of the adjustment mechanisms to those desires in relation to the state of the economy), for the analysis of a monetarily sovereign country, I would rather put the desired financial balance of the Rest of the World with the desired private domestic financial balance and call the sum the desired financial balance of the non-government sector (NGFBd). The model does not deal with stocks at all and their relation to flows (IS-LM did try but failed to do it correctly; read Hicks’s own account in his JPKE article “IS-LM: An explanation”); however, the financial-balance model is a good place to start in Econ 101. If students can understand the model, the identity and how they relate to each other, it would be a HUGE step forward in terms of removing this counterproductive phobia of government fiscal deficits (then one would have to learn about government finance and the monetary creation process, which, like many other things, are all taught backward in textbooks).

If the Rest of the World has too many dollars relative to its taste it and cannot bring them back into the domestic economy, by buying enough goods and services or financial assets from the private domestic and government sectors, the currency depreciates and/or long-term interest rate falls. This boosts exports and reduces imports. This may also promote investment and consumption if the state of expectations is stable.

If the non-government sector desires to save more, then, unless the government sector increases its spending propensity or reduces tax rates, the economy will enter a slump; possibly a debt-deflation process if debt levels are far too high. All this was done nicely in previous posts.
Before, during, and after the adjustment processes (variation of flows, levels and prices) the identity holds and the actual financial balance always sum to zero. The sum of GFBd and NFGBd will be different from zero except when the adjustment is completed, i.e. when actual and desired balances are equal (“at equilibrium” if you want to call it that way, even though markets may not be cleared).