Another Embarrassing Blunder by Chairman Bernanke

The Fed chairman Ben Bernanke in his recent op-ed piece argued that “given the current economic conditions, banks have generally held their reserves as balances at the Fed.” This is not surprising since, in uncertain times, banks’ liquidity preference rise sharply which reflects on their desire to increase their holdings of liquid assets, such as reserve balances, on their balance sheets.

However, Bernanke pointed out that “as the economy recovers, banks should find more opportunities to lend out their reserves.” The reasoning behind this argument is the so-called multiple deposit creation in which the simple deposit multiplier relates an increase in reserves to an increase in deposits (Bill Mitchell explains it in more details here and here). This is a misconception about banking lending. It presupposes that given an increase in reserve balances (RBs) and excess reserves, assuming that banks do not want hold any excess reserves (ERs), the multiple increase in deposits generated from an increase in the banking system’s reserves can be calculated by the so-called simple deposit multiplier m = 1/rrr, where rrr is the reserve requirement ratio (let’s say 10%). It tells us how much the money supply (M) changes for a given change in the monetary base (B) i.e. M=mB. In this case, the causality runs from the right-hand side of the equation to the left-hand side. The central bank, through open market operations, increases reserve balances leading to an increase in excess reserves in which banks can benefit by extending new loans: ↑RBs → ↑ER → ↑Loans and ↑Deposits.
However, in the real world, money is endogenously created. Banks do not passively await funds to issue loans. Banks extend loans to creditworthy borrowers to meet the needs of trade. In this process, loans create deposits and deposits create reserves. We can illustrate this using T-account as follows:

The bank makes a new loan (+1000) and at the same time the borrower’s account is credited with a deposit of an equivalent amount of the loan. Thus, “the increase in the money supply is a consequence of increased loan expenditure, not the cause of it.” (Kaldor and Trevithick, 1981: 5)
In order to meet reserve requirements, banks can obtain reserves in secondary markets or they can borrow from Fed via the discount window.

As noted by Kaldor (1985), Minsky (1975), Goodhart (1984), Moore (1988), Wray (1990), Lavoie (1984) to name a few, money is endogenously created. The supply of money responds to changes in the demand for money. Loans create deposits and deposits create reserves as explained here and here. It turns the deposit multiplier on its head. Goodhart (1994) observed that “[a]lmost all those who have worked in a [central bank] believe that [deposit multiplier] view is totally mistaken; in particular, it ignores the implications of several of the crucial institutional features of a modern commercial banking system….’ (Goodhart, 1994:1424).
As Fulwiller put it, “deposit outflows, if they exceed the bank’s RBs, result in overdrafts. Banks clear this via lowest cost available in money markets or from the Fed.” In this case, let us assume that the bank issues some other liability, such as CDs, in order to obtain the 1000 reserves needed for clearing its overdraft at the Fed.

It reverses the orthodox story of the deposit multiplier (M=mB). Banks are accepting the liability of the borrower and they are creating their own liability, which is the demand deposit. In this process, banks create money by issuing its own liability, which is counted as a component of the money supply. Banks do not wait for the appropriate amount of liquid resources to exist to provide new loans to the public. Instead, as Lavoie (1984) noted ‘money is created as a by-product of the loans provided by the banking system’. Wray (1990) puts it best:
“From the bank’s point of view, money demand is indicated by the willingness of the firm to issue an IOU, and money supply is determined by the willingness of the bank to hold an IOU and issue its own liabilities to finance the purchase of the firm’s IOU…the money supply increases only because two parties willingly enter into commitments.” (Wray 1990 P.74)

As showed above, when banks, overall, are in need of more high-powered money (HPM), they can increase their borrowings with the central bank at the discount rate. Reserve requirements (RRs) cannot be used to control the money supply. In fact, RRs increase the cost of the loans granted by banks. As Wray pointed out “in order to hit the overnight rate target, the central bank must accommodate the demand for reserves—draining the excess or supplying reserves when the system is short. Thus, the supply of reserves is best characterized as horizontal, at the central bank’s target rate.” The central bank cannot control even HPM!The latter is provided through government spending (or Fed lending). The central bank can only modify its discount rate or its rate of intervention on the open market.

Bernanke is concerned that the sharp increase in reserve balances “would produce faster growth in broad money (for example, M1 or M2) and easier credit conditions, which could ultimately result in inflationary pressures.” He is considering the money-price relationship given by the old-fashioned basic quantity theory of money relating prices to the quantity of money based on the equation of exchange (The idea that money is related to price levels and inflation it is not a new idea at all, you can find that, for example, in Hume and other classical economists):

M*V = PQ, where M stands for the money supply (which in the neoclassical model is taken as given, i.e. exogenously determined by monetary policy changes in M), Q is the level of output predetermined at its full employment value by the production function and the operation of a competitive labor market; P is the overall price level and V is the average number of times each dollar is used in transactions during the period. Causality runs from the left-hand side to the right-hand side (nominal output)

According to the monetarist view, under given assumptions, changes in M cause changes in P, i.e. the rate of growth of the money supply (such as M1 and M2) determines the rate of change of the price level. Hence, to avoid high inflations monetary policy should pursue a stable low growth rate in the money supply. The Fed, under Paul Volcker, adopted money targets in October 1979. This resulted in extremely high interest rates, the fed-funds rate was above 20%, the US had double digit unemployment and suffered a deep recession. In addition, the Fed did not hit its money targets. The recession was extremely severe and in 1982 Volker announced that they were abandoning the monetarist experiment. The rate of money growth exploded to as high as 16% p.y, over 5 times what Friedman had recommended, and inflation actually fell (see figure below). 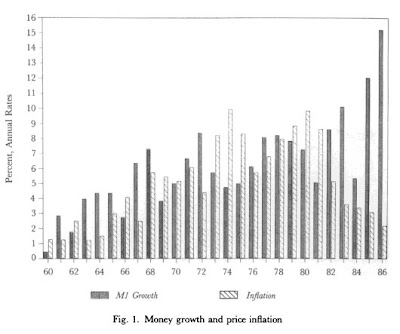 The Collapse of the Money-Income and Money-Price Relationships

Despite the collapse of the relationship between monetary aggregates and inflation Bernanke still believes that “we must either eliminate these large reserve balances or, if they remain, neutralize any potential undesired effects on the economy.” He noted that “we will need to tighten monetary policy to prevent the emergence of an inflation problem down the road” However, is inflation always and everywhere a monetary phenomenon? The answer is no. The picture below plots the credit-to-GNP ratio. Note that even “the movement of credit during the post-1982 period bore no more relation to income or prices than did that of any of the monetary aggregates.” (Benjamin Friedman, 1988:63, emphasis added) 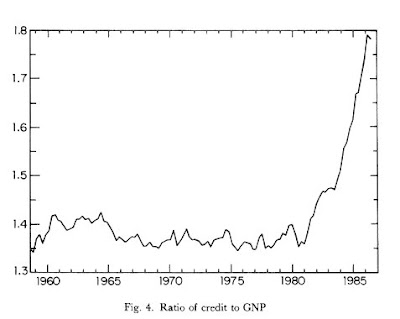 What about the other monetary aggregates? Benjamin Friedman (1988) pointed out that “[t]he breakdown of long-standing relationships to income and prices has not been confined to the M1 money measure. Neither M2 nor M3, nor the monetary base, nor the total debt of domestic nonfinancial borrowers has displayed a consistent relation- ship to nominal income growth or to inflation during this period.” (ibid, p.62)

Even Mankiw admitted that “[t]he standard deviation of M2 growth was not unusually low during the 1990s, and the standard deviation of M1 growth was the highest of the past four decades. In other words, while the nation was enjoying macroeconomic tranquility, the money supply was exhibiting high volatility. The data give no support for the monetarist view that stability in the monetary aggregates is a prerequisite for economic stability.” Mankiw, 2001: 33)

He concluded that “[i]n February 1993, Fed chairman Alan Greenspan announced that the Fed would pay less attention to the monetary aggregates than it had in the past. The aggregates, he said, ‘do not appear to be giving reliable indications of economic developments and price pressures’… [during the 1990s] increased stability in monetary aggregates played no role in the improved macroeconomic performance of this era.” (Mankiw 2001, 34)

A recent study conducted by the FRBSF also concluded that “there is no predictive power to monetary aggregates when forecasting inflation.” What about the Japanese experience? As the figure below shows, the monetary base exploded but prices actually fell! 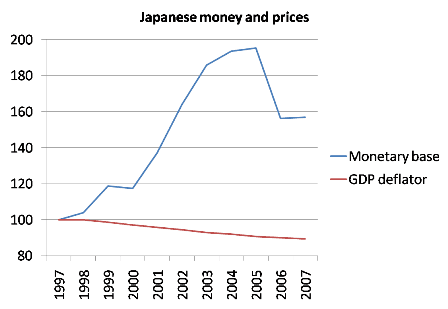 What about the US in the 1930s? The same pattern happened, HPM rose sharply and prices were stable! 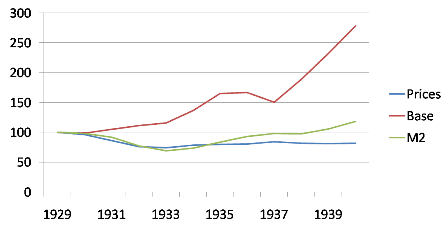 Chairman Bernanke should learn the basic lesson that money is endogenously created. Money comes into the economy endogenously to meet the needs of trade. Most of the money is privately created in private debt contracts. As production and economic activity expand, money expands. The privately created money is used to transfer purchasing power from the future to the present; buy now, pay latter. It allows people to spend beyond what they could spend out of their income or assets they already have. Money is destroyed when debts are repaid.
Consumer price inflation pressures can be caused by struggles over the distribution of income, increasing costs such as labor costs and raw material costs, increasing profit mark-ups, market power, price indexation, imported inflation and so on. As explained above, monetary aggregates are not useful guides for monetary policy.