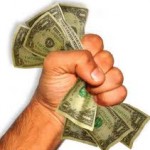 When looking down at earth from space, you would be able to see the shapes of continents and even, if you are aware of geological history, the way, for instance that Africa and South America fit together as they were once part of the same mega-continent.    When living on the surface of the earth, as we most often experience it, one gets an entirely different perspective in which the individual contours of the land, vegetation, buildings, and coastlines look much larger and have different proportions relative to the viewer.  Both perspectives are real and equally valid but in each, different information is revealed or becomes salient to the viewer/participant.

With social systems like money and the economy, there are likewise differences in salient information depending on the scope of the analysis and the standpoint of the observer, which in the academic discipline of economics, long ago, was reflected in the distinction between micro- and macroeconomics.  The economy looks differently from the perspective of an individual economic actor in contrast to the perspective of a national government, especially with regard to trends in large group behavior, sometimes called “aggregate” trends as well as with how money appears to each of these broad classes of economic actor.  Macroeconomics, currently marginalized within the academic hierarchy of economics, is the study of aggregate phenomena and trends.

One of the founding discoveries or re-discoveries that led to the formation of the discipline of macroeconomics was Keynes’s application of the concept of the “paradox of thrift” to the downward spiral of the economy during the Great Depression.  Within the paradox of thrift, first observed during ancient times, from the perspective of each individual economic actor it made sense during a sharp downturn of the economy to pay off debts and/or save as much money as possible yet this activity in aggregate led to reduced incomes and greater impoverishment for all.  From that different-than-individual, group or aggregate perspective, those with an overview of the economy and a will to improve overall social welfare entered into a search to find a way to increase the overall liquidity of the economy, the velocity and quantity of money and goods changing hands, so that economic activity would once again pick up.  Modern macroeconomic management, often called “Keynesian”, emerged from policies that more or less succeeded in overcoming the effects of the paradox of thrift.  Macroeconomic management, including the ability to short-circuit such downward spirals in the economy, requires the assumption of a national perspective that is not reducible to the perspective of any one private actor.

One of the components of macroeconomic management recommended by Keynes but theorized only later by Modern Money Theorists, was ending the gold standard and transitioning to a fiat currency.  A fiat currency is a money system that was designed to provide adequate liquidity to the economy to produce politically-acceptable levels of growth and full or politically-acceptable levels of employment without causing adverse effects like excessive price inflation from the demand side.   Fiat currencies are money created by “fiat”, by government command or initiative.  While fiat currencies and the fiat element of all money itself have existed from the time government-issued money was invented, since the 1930’s a consensus gradually emerged among economic observers which still holds that the gold standard created unacceptable rigidities in the supply of money, leading to depressions and economic misery caused by the monetary system itself.  Despite the enthusiasm for a return to the gold standard among some “Austrian” economic philosophers and the right-wing fringe, no one who analyzes the dynamics of the economy using real world data recommends the return to the fixed or arbitrarily limited stock of money that the gold standard would require.

The process by which the gold standard was at first breached and then completely rejected was not formalized or enshrined within the structure of neoclassical economic theory, the economics taught in colleges and in graduate schools.   Neoclassical economics tends to treat money as just one of many commodities that is traded for other commodities, so the formal change from the gold standard to fiat money did not register within the basic model of how economies work, absorbed by millions of students per year throughout the world.  Gold, after all, is a commodity, so it would seem “reasonable” within neoclassical economics that money, another commodity, would be tied to gold.  Critics of neoclassical economics from the Post-Keynesian school claim with good reason that the dominant school within economics has no theory of money at all.  Instead the nature of money has been treated as side issue, a matter, for the most part of the less prestigious sub-discipline of economic history or dismissed entirely as not worthy of study.

The path to the current regime of fiat currencies has been then one that has arisen from the practical experience of governing during times of economic crisis with additionally a minority of economists providing during and after the fact a theoretical framework to understand the move to a fiat currency. Historically leaders who have sought the freedom to address the real economic challenges they faced, often out of necessity rejected the use of metals or a metal standard to issue purely fiat money at first temporarily (Lincoln’s Greenbacks during and after the American Civil War, Roosevelt suspending the gold standard during the Depression).  In the category of “not-quite fiat” currency, populist campaigners against the gold standard, like William Jennings Bryant advocated bimetalism (adding silver to gold) as a means to increase liquidity and price inflation in a deflationary environment and lighten debt loads of poor farmers.  Nixon’s closing of the gold window and the US’s withdrawal from the Bretton Woods system, leading to the current fiat currency era did not originate in economic theory but was a response to a liquidity crunch in the early 1970’s, brought about by the costs of the Vietnam War, social spending, and a mounting US trade deficit.  Abba Lerner’s functional finance and later Modern Money Theory (MMT) have been the theories of fiat currency which have as yet not been self-consciously utilized within government policy or integrated into the mainstream economic teaching which still views money as a commodity among other commodities and not what it has been now for many years, a fiat public monopoly.

While capitalism is the object of fulsome praise by many, supposedly neutral, economic commentators, as an economic system it has flaws, though some forms of capitalism with a substantial public sector seem to be the most successful economic systems that are currently in existence.  Without recognition of defects in capitalism, it is almost impossible to design a program of sound macroeconomic management as these inevitable flaws are treated as non-existent and are therefore ignored.  The current dominant neoliberal political-economic ideology is of the type of approach to capitalism that bathes unregulated markets in a positive, unrealistic glow rather than realistically recognizing their weaknesses. President Obama is, as are many other contemporary world leaders, ensconced within the neoliberal worldview that celebrates markets while it deprecates government’s role in the economy.  Therefore he is inclined to view laissez-faire capitalism through rose-colored glasses, which in many ways explains the Administration’s misassessment of the collapsing economy in 2008-2009 and the premature relaxation of its response to the Great Recession in the following years.

One of the most obvious problems of laissez-faire capitalism observed by both those who seek to overturn capitalism and those who seek to reform it, is that capitalism on a systemic level suffers from chronic shortages of (monetary) liquidity as a feature and not an accident of history.  The financial goal of capitalists, investors, and many wage earners, if they earn enough, is to receive in payment more money than they spend, accumulating money in bank accounts or their equivalent.  These savings take money out of circulation, which slows and eventually shrinks the economy, reducing its overall liquidity.  This is the dynamic of the paradox of thrift, which is not only applicable to downward spirals of the economy but is also a secular problem of capitalism more generally.   In addition, capitalism requires continual increases in labor productivity by replacing human labor through machines powered via non-food energy, of either renewable, nuclear or fossil provenance.  These increases in productivity tend to lead, without a strong countervailing egalitarian ethic or movement, to decreases in the proportion of income that is distributed through wages, that method of distributing income which benefits those who are most likely to spend money.

Associated with the propensity to save and increasing returns to capital rather than labor is then increasing inequality, which further undermines effective demand, an outcome of inadequate distribution of liquidity throughout society.  Liquidity becomes maldistributed, concentrated among those who tend to save more, the wealthy, because their basic needs are met and liquidity becomes increasingly drained from those sectors of society that have greater needs and enter into a vicious cycle of poverty and increasing debt.  Effective demand is thus undermined.  Therefore, while it is frequently categorized as purely an ethical issue or a matter of personal political preference, increasing economic inequality endangers the entire economic system, as effective demand for real goods and services is reduced and the economy turns increasing to gambling on asset values and the creation of a Ponzi economy.

The secular, long-term trend of increasing maldistribution of liquidity and its concentration among the wealthy is obscured and also exacerbated by the cyclical dynamic of increases and decreases in private lending and loan repayment.  Peaking and collapsing with the business cycle, private loans from banks and other entities inject liquidity temporarily into the economy that is then withdrawn upon repayment of the loans plus interest.  The net effect across the business cycle of private lending is to distribute liquidity (money) upwards and into an increasingly bloated financial sector.  Furthermore with the collapse of lending in a bust, the withdrawal of liquidity from the economy is further exacerbated by the increased ratio of loans being repaid rather than being advanced in the first place (net deleveraging).  In a downturn, this process can have devastating impacts on the less advantaged, who can be forced into penury, homelessness and/or debt servitude by decreases in income and the debts taken on in previous better times.  The private debt cycle further destabilizes the economic system, especially if it is not strictly regulated.