Pressures on the Paradigm: The Fall of the New Monetary Consensus

The following is a paper given at the ASSA conference in Denver this past week for a panel organized by James Galbraith, titled Pressures on the Paradigm, sponsored by Economists for Peace & Security.

The Queen famously asked her economists why none had seen the global crisis coming. Obviously the answer is complex, but it must include the evolution of economic theory over the postwar period—from the “Age of Keynes”, through the Friedmanian era and the return of virulent Neoclassical economics, and finally on to the New Monetary Consensus with a New anti-Keynesian version of fine-tuning by an unaccountable (“independent”) central bank

We cannot leave out the parallel developments in finance theory—with its efficient markets hypothesis—and the subsequent deregulation and de-supervision that led to the financialization of everything.

But to make a long story short: if your theory says that a global collapse is impossible, you won’t see one coming. In truth, as Jamie has argued in his great book, the Predator State, no one outside Chicago and other institutes of the higher learning ever took the free market mantra seriously—outside the ivory towers it was nothing but a slogan, a justification for enrichment of the powerful few.

Like Jamie, I believe orthodox macroeconomics is finished—although not all the zombie practitioners of that dismal religion recognize they are dead. After the crisis hit, Jamie, Duncan Foley and I were invited to appear on panels at the University of Chicago along with a dozen or so of the Chicago boys.

Not surprisingly, none of them was budging from his dogma of free and efficient markets: the crisis was caused by too much government interference; the solution is more deregulation. Three years into this crisis those who never saw it coming proclaim signs of recovery everywhere they look.

And, still, it is only academia that is clueless. Everyone in financial markets saw it coming—indeed, they planned on it and worked fastidiously to create it. They would profit on the way up, and then profit more in the collapse whilst collecting on their credit default swap bets and stealing all the homes.

It is Bush’s ownership society and the goal all along was to transfer all ownership to the top through the creation of serial bubbles—what Michael Hudson calls Bubbleonia. The biggest land grab since the enclosure movement.

So, no, there is no recovery. The banks are more massively insolvent than they were 2 years ago. They are cooking their books so they can pay executive bonuses and reward the traders and the foreclosers who are successfully transferring all wealth to the elite.

But Jamie asked me to address the state of theory—not the economy.

I want to focus on one particular Zombie that needs a stake through its heart or a bullet through its head: the New Monetary Consensus. This is an updated New Keynesian version of the old Bastard ISLM model.

The idea is that inflation slows growth so it must be diligently fought. The Fed will keep inflation expectations low, inflation will be low, and growth will be robust.

Every link in that sentence is a delicious illusion.

But if it cannot control expectations it cannot manage inflation and all bets are off. What a flimsy reed upon which to hang public policy!

And in any case, why should low inflation generate robust growth? Because—well, because the Fed says it will, contrary to all evidence.

Out in the real world, expectations alone cannot govern any economic phenomena: inflation expectations will determine actual inflation only if those with ability to influence prices act on those expectations. And inflation below the high double digits has never proven to be a barrier to economic growth.

Let us take the current experience as an example. We have moved on to QE2, an application of the NMC.

Helicopter Ben is supposedly injecting trillions of dollars of money into the economy to create expectations of inflation—to counter the deflationary real world forces. And many wingnuts actually ARE expecting inflation—running around like Chicken-Littles, buying gold and screaming about hyperinflation and collapse of the dollar. And, yet, no inflation. Why?

Because those who might have pricing power—corporations and organized labor—cannot create inflation. Workers cannot increase their wages given massive global unemployment, and firms cannot increase prices in the face of competitive pressures. So no matter how strong is the will to believe, it has no purchase against the facts.

The wingnuts will be proven wrong. The Fed cannot create inflation. It is within the power of the central bank to lower the price of reserves—the overnight rate–as close to zero as it wants. It can also lower longer term rates on assets it is willing to buy, but there is a nonzero practical limit to that based on what Keynes called the square rule.

Quantitative easing supposedly pumps money into the economy to generate spending in order to create expectations of inflation. But all it really amounts to is substituting reserves for treasuries on bank balance sheets—lowering their interest earnings. QE won’t work because:

• (2) the interest rate effects are small at best, and are swamped by private sector attempts to deleverage;

– The best estimate based on NYFed work: 18 basis points

• (3) purchases of Treasuries are simply an asset swap that reduce the maturity of private sector assets, but do not raise private sector incomes; and

• (4) given the reduced maturity of private sector portfolios, reduced interest income could actually be deflationary.

But we knew all that—Japan has been doing QE for 20 years, trying to create expectations of inflation in the face of deflationary headwinds, thus, it is interesting to compare Japanese and US experience (so far) by looking at a series of three graphs. 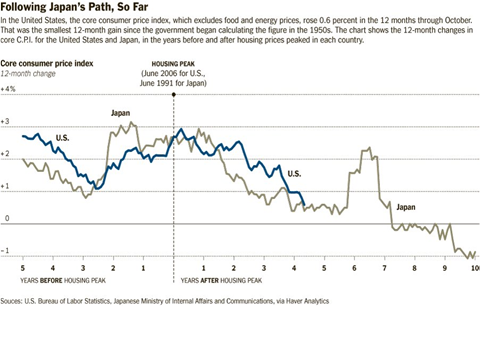 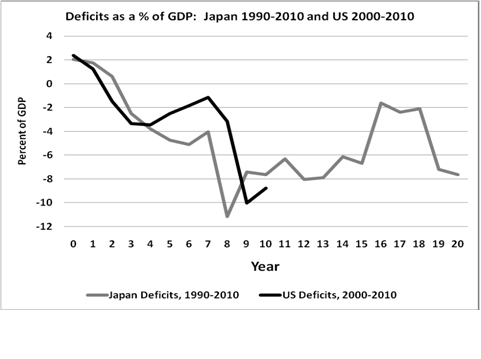 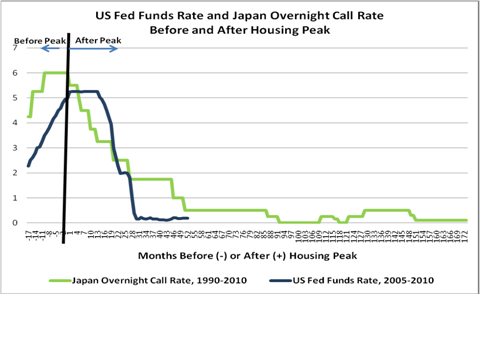 As they say, history doesn’t repeat itself but in this case it rhymes nicely. Only insanity would lead us to follow Japan’s path while expecting different results.

Let me finish my critique of the NMC with an observation of a Galbraith—John Kenneth this time:

To limit unemployment and recession in the US and the risk of inflation, the remedial entity is the Fed… For many years (with more to come) this has been under the direction from Washington of a greatly respected chairman… The institution and its leader are the ordained answer to both boom and inflation and recession or depression… Quiet measures enforced by the Fed are thought to be the best approved, best accepted of economic actions. They are also manifestly ineffective. They do not accomplish what they are presumed to accomplish. Recession and unemployment or boom and inflation continue. Here is our most cherished and, on examination, most evident form of fraud.

Even if the early postwar “Keynesian” economics had little to do with Keynes at least it had some connection to the real world. What passed for macroeconomics on the precipice of the global collapse had nothing to do with reality—it is as relevant to our economy as flat earth theory is to natural science.

In short, expecting the Queen’s economists to foresee the crisis would be like putting flat- earthers in charge of navigation for NASA and expecting them to accurately predict points of re-entry and landing of the space shuttle. Of course, the economic advisors to Presidents Bush and Obama could do no better.

Referring to the work of the best known economists over the past thirty years, Lord Robert Skidelsky argues “Rarely in history can such powerful minds have devoted themselves to such strange ideas.” Not only were they strange, but the ideas of the Larry Summers’, Bob Rubins, Mankiws, Marty Feldsteins, Bernankes and John Taylors of the world were, predictably, dangerous.

But one economist got it right, and did see it coming. And that is Hyman Minsky. His theory said it can happen again: market forces are destabilizing.

The economy emerged from WWII with a robust financial system—hardly any private debt and lots of safe and liquid government debt. Various New Deal and postwar reforms also made the economy stable: a safety net that stabilized consumption; strict financial regulation; minimum wage laws and support of unions; low cost mortgages and student loans, and so on. And memories of the Great Depression discouraged risky behavior.

While most who invoke Minsky focus on the crash, he believed that the main instability is a tendency toward explosive euphoria. High aggregate demand and profits associated with high employment raise expectations and encourage increasingly risky ventures based on commitments of future revenues that will not be realized.

A snowball of defaults then leads to a debt deflation and high unemployment unless there are “circuit breakers” that intervene to stop the market forces. The main circuit breakers, are the Big Bank (central bank as lender of last resort) and Big Government (countercyclical budget deficits).

And, boy-oh-boy have we got a Big Bank and a Big Government! Together, the Benny and Timmy tag team have spent, lent, or guaranteed $25 trillion in the name of Uncle Sam. And that still is not enough. “It” is still happening.

The problem is that most of this was done by the Big Bank Fed, aimed at helping financial institutions—trying to prop up their worthless assets. In short, it was based on the theory that we need Money Manager capitalism and that the only hope is to generate another bubble.

It won’t work. Financialization is the problem, not a sustainable economic strategy. We need to turn instead to an updated Keynesian-Minskian New Deal based on jobs, growing wages, consumption—especially public consumption, constrained and downsized finance, and greater equality. Monetary policy also has to be downsized, while fiscal policy has to play a bigger role. Not fine-tuning but a positive and permanent presence to counter and guide and supplement the private purpose.

More importantly we’ve got to formulate theory applicable to the world in which we actually live—not one in which imaginary representative agents allocate resources along an optimal consumption path.

To that end, we stand on the shoulders of the giants like Minsky in the heterodox tradition.

11 responses to “Pressures on the Paradigm: The Fall of the New Monetary Consensus”