Is the MSM Blackout on Inequality, Plutocracy, and Oligarchy Ending?

All of a sudden MSNBC cable commentators are talking about plutocracy and oligarchy. Surprisingly, the first occurrence of this I’m aware of was Chuck Todd, reacting on his Daily Rundown show to the spectacle of Republican candidates traveling to Vegas to seek funding from Sheldon Adelson and his group of hugely wealthy Jewish Republican donors. Todd began to explore the implications of that event. He seemed exercised, and more than the slightest bit upset, about its meaning for Democracy and used the words plutocracy and oligarchy. Andrea Mitchell also discussed it later and she, too, registered apparent dismay, while using the “p” and “o” words.

Chris Hayes has been on leave during this period, so we haven’t heard from him about this. But Chris Matthews, the “oh so very slightly left-of-center insider” has been making very unfriendly noises about Adelson, the Kochs, and the Supremes, culminating today (April 3rd) with nasty references to plutocrats, oligarchs, and candidates, kissing oligarchs somewhere or other, on both his program and Al Sharpton’s.

But the most interesting outbreak of a sudden passion for democracy and hostility toward plutocracy and emerging oligarchy has occurred on The Cycle show, where, in the wake of Abby Huntsman’s oligarch-inspired attack on Social Security and entitlements generally, Krystal Ball has begun talking about inequality, Thomas Piketty’s recently published in English hyped-book on the subject, and the rise of plutocracy and oligarchy in the United States. Here are two videos from the April 1st Cycle show. In the first, Krystal Ball in introduces a discussion among Cycle co-hosts, Touré, Abby Huntsman, and Luke Russert, and Susan Ochs of the Aspen Institute, making a guest appearance.

Amid much praise of Piketty’s book and assertions that it may lead to a re-orientation in the world view of American politics there was a discussion primarily among Susan Ochs, Ball, and Huntsman, about why the rich are sitting on all their money and are not investing it in new businesses that would lower unemployment, create a positive spiral of economic growth that, in turn, would create a healthy and dynamic economy, that, in its turn, would lower inequality.

Huntsman, of course, delivered the right wing gospel, that the increasing concentration of wealth with growing inequality, predicted by Piketty, can be avoided by policies that would restore growth, with the implication being that programs funding new innovations and the proper mix of tax incentives for the rich might shift the psychology of business and persuade investors to stop sitting on their money and start creating the long-awaited full recovery. Huntsman also emphasized the talking point that people aren’t bothered by inequality as long as they themselves are making gains, a contention I critiqued recently.

Ochs, assisted by Ball, with murmurs of agreement from the other two on the panel, quickly talked her down, however, pointing out that businesspeople would be unlikely to respond to anything but increased sales, especially when they could make profits the easy way through financial activities in the international economy. Ochs, in particular, emphasized that the key to restoring a healthy economy and reducing inequality was increased demand; but, following the principle of pundits talking about problems, but rarely real solutions, she stopped short of telling us what could be done to create that demand if business will not do it.

Later in the program, Krystal Ball, in the second video, returned to the subject of inequality, and this time emphasized strongly the danger to democracy it represented. This commentary didn’t make any specific proposals, but it was quite out front in both emphasizing the problem of inequality as a threat to democracy and calling for something “radical” to be done about it.

. . . according to a formula he dubs a “fundamental law.” Algebraically, it is expressed as r>g, where r is the return on capital and g is the growth of income. Here again, he seems to be talking about physical volumes of capital, augmented year after year by profit and saving.

But he isn’t measuring physical volumes, and his formula does not explain the patterns in different countries very well. For instance, his capital-income ratio peaks for Japan in 1990—almost a quarter century ago, at the start of the long Japanese growth slump—and for the United States in 2008. Whereas in Canada, which did not have a financial crash, it’s apparently still rising. A simple mind might say that it’s market value rather than physical quantity that is changing, and that market value is driven by financialization and exaggerated by bubbles, rising where they are permitted and falling when they pop.

Jamie Galbraith also disagrees with Piketty on the policies we ought to use to reduce inequality. Piketty recommends a very pronounced focus on a global tax on wealth and also on high marginal income tax rates to go back to post-war policies, while Jamie says:

If the heart of the problem is a rate of return on private assets that is too high, the better solution is to lower that rate of return. How? Raise minimum wages! That lowers the return on capital that relies on low-wage labor. Support unions! Tax corporate profits and personal capital gains, including dividends! Lower the interest rate actually required of businesses! Do this by creating new public and cooperative lenders to replace today’s zombie mega-banks. And if one is concerned about the monopoly rights granted by law and trade agreements to Big Pharma, Big Media, lawyers, doctors, and so forth, there is always the possibility (as Dean Baker reminds us) of introducing more competition.

Finally, there is the estate and gift tax—a jewel of the Progressive era. This Piketty rightly favors, but for the wrong reason. The main point of the estate tax is not to raise revenue, nor even to slow the creation of outsized fortunes per se; the tax does not interfere with creativity or creative destruction. The key point is to block the formation of dynasties. And the great virtue of this tax, as applied in the United States, is the culture of conspicuous philanthropy that it fosters, recycling big wealth to universities, hospitals, churches, theaters, libraries, museums, and small magazines.

I think Jamie has it right, especially since, as he says, a return to high progressive tax rates would be met by various tax avoidance schemes of the kind that caused the previous regime of high progressive taxation to become ineffective over time, and also because a global tax on wealth would be very hard, if not impossible, both to legislate and to administer in today’s world. In addition, however, I think Piketty may not understand how fiat currencies can be used by governments to lower inequality by creating full employment, along with higher minimum wages, and a healthier labor market, in which employers would find it much more difficult to pay less than a living wage.

And this brings me back to the possibility of alleviating inequality by creating a truly healthy economy even better than the one western nations enjoyed in the quarter century after World War II. The Cycle panel and Susan Ochs left us at the point of recognizing that business needed demand before it was likely to use its assets to create a positive growth spiral in which all would share in the rewards of increased productivity reducing inequality in the process.

Well, of course, there is an emphatic Modern Money Theory (MMT) answer to the chicken-egg problem highlighted by The Cycle discussion. And that is that the Government is the only force that is likely to end economic stagnation and rising inequality, because it has the policy space and financial capability to create full employment and price stability.

I’ll end this post with a video clip of a talk, along with a slide presentation given by Stephanie Kelton on the Fiscal Cliff in November of 2012. These lay out very explicitly why Government deficit spending is the most likely way of getting out of the box highlighted by the Cycle discussion, and providing the answer to Abby Huntsman that Susan Ochs wasn’t able to offer, for whatever reason. 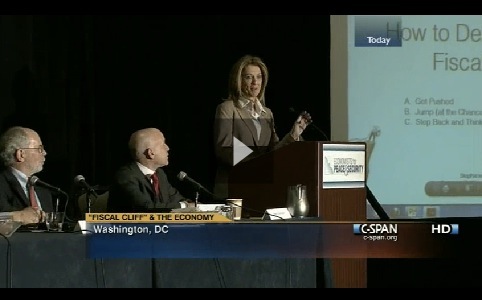 A C-SPAN video clip of Stephanie Kelton’s presentation on the Fiscal Cliff with New America Foundation / Economic Growth Program / Economists for Peace and Security. Click here or the image to view the clip at C-SPAN

Here are the slides from the presentation:

There are many takeaways from this presentation. But perhaps the most important is that austerity budgeting harms people and that the “radical” thing we have to do is to budget to benefit most people, including to maintain full employment and price stability without worrying about or targeting the size of the deficit or the debt-to-GDP ratio. If we care about reducing inequality, then we will do the things Jamie Galbraith has mentioned, supplement those things with budgeting for people, and forget about CBO deficit/debt projections and targeting deficit reduction. In short, stop playing the fiscal austerity game, and start worrying about REAL fiscal responsibility.

14 responses to “Is the MSM Blackout on Inequality, Plutocracy, and Oligarchy Ending?”