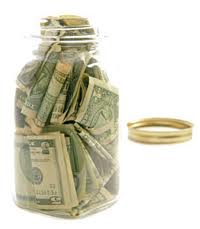 You know those radio collars they put on grizzly bears, so they can track where they go through the bushes and forests? Well, I’m pleased to announce they’ve developed a radio collar that fits on a U.S. Dollar. (This was a particular accomplishment since most U.S. Dollars now are electronic, the essence of their existence coded on magnetic discs, the embodied code appearing and disappearing, disc to disc, not unlike the quarks and neutrinos of quantum mechanics.) Without going into how they did it, then, we can simply announce that now we can track a U.S. Dollar through the bushes and forests of our economy and, hopefully, on this episode of NATURE, discover the roots and results of wasteful government spending.

Obviously, we can’t track ALL the Dollars, so we have to first decide which one to put the collar on. To avoid any accusations of hanky-panky, we’ll do this arbitrarily—blindfolded, so to speak: We’ll just count to three and pin it on the first Dollar that comes out of the Federal Reserve on the count of four. Here it comes—SPOOT!!—where’d it go? Turn on the radio direction finder!

Right off the bat we can see there’s a problem: Our Dollar went into a “contingency bank account” for Solyndra Corporation, the developer/manufacturer of a unique, experimental, solar energy technology that might or might not pan out. A pretty risky place for our Dollar to begin its adventure.

But look! There’s hope! Our Dollar has squeaked its way into the paycheck of a Solyndra engineer, who has deposited it in the family checking account and—we can already see—the mother of his three daughters has already spent it to…. Wait a minute. Adjust the gain on the radio-beacon please!….Spent it on…there it is! Our Dollar is now in the bank account of the Stony Creek Day Care Center. It seems stuck there momentarily—this is a good time for a commercial break brought to you by the GreatAmerica SuperPAC to cut wasteful federal spending.

Now our Dollar has jumped again! Strong signals are coming from Nelson’s Emergency Plumbing—“24 Hr. Service Day or Night.” It seems the Day Care Center had a broken water pipe, and now Arne Nelson is speeding toward a Bank of America ATM machine with a Stony Creek check in his pocket, desperate to get it deposited so he can make a payment on his new bass-fishing boat. How can the radio collar track that check? Amazing. We don’t know! Until the check clears, part of our Dollar’s code is still back at Stony Creek Day Care, but enough of it (quark-like) has glued itself to the check in Arne’s pocket that we can actually see the blue dot of our spotter square on the top of his pick-up’s cab as he pulls into Bank-of-America. And we should expect to see—yes, there it is, flashing now in the Bofa account for Bigger Bass Boats Inc.

Now this is interesting: the vice president of Bigger Bass Boats has just pulled up to an ATM machine in an entirely different state—Wyoming for heavens sake!—about 2000 miles from where we’re taping this episode of NATURE, and look! Our Dollar is popping out of that ATM machine as part of an actual, paper, ten dollar bill! And here goes the VP, walking across the street with it to Sammy’s Subways, and he’s buying a twelve inch steak-and-cheese with extra pickles! You have to admit, folks, our Dollar may be kind of ephemeral, but it makes things happen! First an experimental solar panel that may or may not work, then a day-care story-time session, then a fixed plumbing pipe, then a bass fishing boat with a 250 horse-power jet motor, then a steak and chees sub! What’s going to happen next?

Except look what Sammy’s doing now: he’s putting our Dollar into…. Is that a jar? Yes, it’s a five quart pickle jar with a slot cut in the lid. And it’s filled, we can see, with other Dollars! I think we’re going to need very long commercial break here. We may even need to show some back episodes—this is kind of like a major rain-delay in the seventh game of the World Series, because LOOK at the label Sammy has taped to the side his pickle-jar. Can we zoom in for a shot of that? “2012 TAXES”.

It looks like this is then end of the road for our Dollar. Our producer is cursing at all this bad luck. It turns out that’s the only U.S. Dollar radio-collar available, and there it is, stuck in Sammy’s pickle-jar. Nothing much to do—except (as we patiently wait for April 15th when we assume the Dollar will come out of the pickle-jar) we can report that Solyndra has, in fact, gone bankrupt. The uniquely efficient solar panels it thought it might be able to produce didn’t really perform as expected. So we can, at least, assure ourselves that our radio-collar experiment has uncovered a flagrant example of wasteful federal spending. That feels better.

But here’s April 15th, now, and look what Sammy’s doing! He’s removed the Dollar bills (including ours) from the pickle-jar, counted them out, put a thick rubber-band around them, inserted the bundle into a manila envelope with his tax filing, and is now boarding a Cheyenne metro-bus. What in the world is he doing? Of course! He’s getting off the bus at the Cheyenne IRS office, walking through the big glass doors, reading the building directory, getting on an elevator, walking down a hall, stepping up to a counter with his manila envelope—and paying his taxes.

Now Sammy’s gone, and the blue dot of our tracking spotter is blinking on the stack of Dollar bills sitting next to the attractive blonde clerk who is reading Sammy’s tax filing and entering its information into her computer. And then something completely unexpected happens! Our blue tracking dot disappears from the stack of Dollars next to her keyboard! What’s happened? Has the radio-collar stopped working? Our surprise changes to panic as we watch the clerk, moving with casual indifference, pick up the stack of Dollars, carry them a few steps to the hopper of a grey machine that looks like a…. No! Wait! The radio-collar!

Too late. We’ll have to make a new one.

This entry was posted in J. D. Alt and tagged dollar, MMT. Bookmark the permalink.

7 responses to “Radio-Collar for a Dollar”