Posted on April 1, 2011 by admin | 10 comments
By L. Randall Wray
Approximately a decade ago I wrote a paper with a similar title, announcing that forces were aligned to produce the perfect fiscal storm. What I was talking about was a budget crisis at the state and local government levels. I had recognized that the economy of the time was in a bubble, driven by what I perceived to be unsustainable deficit spending by the private sector—which had been spending more than its income since 1996. As we now know, I called it too soon—the private sector continued to spend more than its income until 2006. The economy then crashed—a casualty of the excesses. What I had not understood a decade ago was just how depraved Wall Street had become. It kept the debt bubble going through all sorts of lender fraud; we are now living with the aftermath.
Still, it is worthwhile to return to the “Goldilocks” period to see why economists and policymakers still get it wrong. As I noted in that earlier paper:
It is ironic that on June 29, 1999 the Wall Street Journal ran two long articles, one boasting that government surpluses would wipe out the national debt and add to national saving—and the other scratching its head wondering why private saving had gone negative. The caption to a graph showing personal saving and government deficits/surpluses proclaimed “As the government saves, people spend”. Almost no one at the time (or since!) recognized the necessary relation between these two that is implied by aggregate balance sheets. Since the economic slowdown that began at the end of 2000, the government balance sheet has reversed toward a deficit that reached 3.5% of GDP last quarter, while the private sector’s financial balance improved to a deficit of 1% of GDP. So long as the balance of payments deficit remains in the four-to-five percent of GDP range, a private sector surplus cannot be achieved until the federal budget’s deficit rises beyond 5% of GDP (as we’ll see in a moment, state and local government will continue to run aggregate surpluses, increasing the size of the necessary federal deficit). [I]n recession the private sector normally runs a surplus of at least 3% of GDP; given our trade deficit, this implies the federal budget deficit will rise to 7% or more if a deep recession is in store. At that point, the Wall Street Journal will no doubt chastise: “As the people save, the government spends”, calling for a tighter fiscal stance to increase national saving!

Turning to the international sphere, it should be noted that US Goldilocks growth was not unique in its character. [P]ublic sector balances in most of the OECD nations tightened considerably in the past decade–at least in part due to attempts to tighten budgets in line with the Washington Consensus (and for Euroland, in line with the dictates of Maastricht criteria). (Japan, of course, stands out as the glaring exception—it ran large budget surpluses at the end of the 1980s before collapsing into a prolonged recession that wiped out government revenue and resulted in a government deficit of nearly 9% of GDP.) Tighter public balances implied deterioration of private sector balances. Except for the case of nations that could run trade surpluses, the tighter fiscal stances around the world necessarily implied more fragile private sector balances. Indeed, Canada, the UK and Australia all achieved private sector deficits at some point near the beginning of the new millennium.
As we now know, my short-term projections were not too bad, but the medium-term projections were off. The Bush deficit did grow to 5% of GDP, helping the economy to recover. But then the private sector moved right back to huge deficits as lender fraud fueled a real estate boom as well as a consumption boom (financed by home equity loans). See the following chart (thanks to Scott Fullwiler): 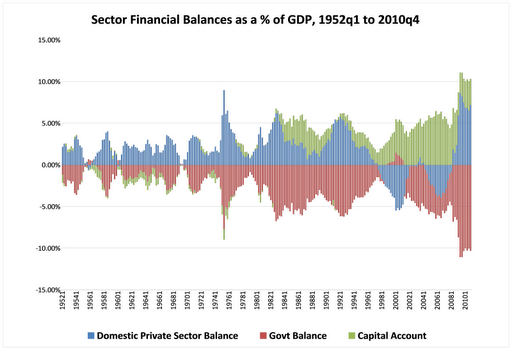