The German Right is Stunned that Plowing Wickedness Has Reaped Iniquity

Republican Party leaders are shocked that their three decades of pursuing the racist “Southern strategy,” California Governor Pete Wilson’s desperate attacks on Latinos, myriad assaults on women’s rights, and repeatedly sponsoring gay bashing propositions designed to energize the (bigoted) base have created a base that champions Donald Trump’s serial hatred.  Key leaders of the hard right in Germany are shocked by the same dynamic.  The prophet Hosea has two verses that warned of this dynamic millennia ago.

END_OF_DOCUMENT_TOKEN_TO_BE_REPLACED

It is often the moral and economic blindness of New York Times articles about the EU crisis that is most striking. The newest entry in this field is entitled “Now Europe Must Decide Whether to Make an Example of Greece.” That is a chilling phrase most associated in our popular culture with a Consigliere and his Don deciding whether to order a mob “hit.” It is, therefore, fitting (albeit over the top) as a criticism of the troika’s economic, political, and propaganda war against the Greek people. Except that the article is actually another salvo in that war.

Let’s start with the obvious – except to the NYT. “Europe” isn’t “decid[ing]” anything. The troika is making the decisions. More precisely, it is the CEOs of the elite German corporations and banks that direct the troika’s policies that are making the decisions. The troika simply implements those decisions. The troika consists of the ECB, the IMF, and the European Commission. None of these three entities represents “Europe.” None of them will hold a democratic referendum of the peoples of “Europe” to determine policies. Indeed, they are apoplectic that the Greek government dared to ask the people of Greece through a democratic process whether to give in to the troika’s latest efforts to extort the Greek government to inflict ever more destructive and economically illiterate malpractice on the Greek people.

END_OF_DOCUMENT_TOKEN_TO_BE_REPLACED

Kilkenomics, being a festival of economists and comedians, has long reflected the economic consensus that austerity in response to a Great Recession is economic malpractice akin to bleeding a patient to make him healthy. One of the great changes in Europe in the last month is that the number of economic voices willing to make this same point have grown rapidly. Germany’s “there is no alternative” (TINA) to austerity claims were always absurd, but now many more European voices are willing to point out that there are superb alternatives – in Germany. A recent Irish Times article provides a good example.

“Leading economists have criticised Germany on its public investment restraint which, at 18.4 per cent of GDP, is below the EU average of 19.2 per cent. A study by Berlin’s DIW economic think tank suggests a €1 trillion backlog has built up in Germany since 2000.”

END_OF_DOCUMENT_TOKEN_TO_BE_REPLACED

It is often the small things that best illustrate insanity.  On October 13, 2014, EU Economic and Monetary Affairs Commissioner Jyrki Katainen spoke to emphasize one message:

“[The EU’s leaders] ‘don’t want the [European Investment Bank] EIB crowding out private investment.’  He said the EIB should be used to leverage money from the private sector, ‘and play a part in big infrastructure projects,’ notably ones that have been delayed.”

It’s helpful to situate this smaller example of economic insanity within the broader context of the insanity of austerity inflicted by those same EU leaders.  The general insanity is that the EU politicians are the most economically illiterate and extreme member of the troika.  I just wrote a column explaining that they are bitterly attacking Mario Draghi, the head of the European Central Bank (ECB) for (in their warped interpretation) becoming apostate on the subject of austerity.  The IMF, at least many of its professional economists, left the one truth faith of the austerians long ago when it began publishing research showing that fiscal stimulus was a great success and even its leadership began to warn against austerity.

END_OF_DOCUMENT_TOKEN_TO_BE_REPLACED

It is good to be Angela Merkel.  Growth in Germany goes sharply negative in the last quarter of 2012 and press reports emphasize how sound the German economy is because it is a net exporter.  This article analyses how the Wall Street Journal and the New York Times presented the news about Germany’s economy.  I show that the presentation reveals more about the pathologies of our major media than about the pathologies of Germany and the Eurozone.

END_OF_DOCUMENT_TOKEN_TO_BE_REPLACED

The Eurozone as a Modern Day ‘Merchant of Venice’

By Marshall Auerback
(Readers may skip directly to the post. But why would you?) 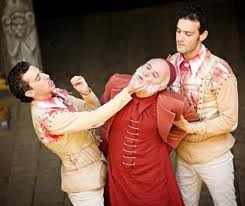 A pound of that same merchant’s flesh is thine;
The court awards it, and the law doth give it.

END_OF_DOCUMENT_TOKEN_TO_BE_REPLACED

Today Germany is the Big Loser, Not Greece

Given the German electorate’s long standing aversion to “fiscal profligacy” and soft currency economics (said to lead inexorably to Weimar style hyperinflation), one wonders why on earth Germany actually acceded to a “big and broad” European Monetary Union which included countries such as Greece, Portugal, Spain and Italy.Clearly, this can be better understood by viewing the country through the prism of the Three Germanys, which we’ve discussed before:Germany 1 is the Germany of the Bundesbank: the segment of the country which to this day retains huge phobias about the recurrence of Weimar-style inflation, and an almost theological belief in sound money and a corresponding hatred of inflation. It is the Germany of “sound finances” and “monetary discipline”. In many respects, these Germans are Austrian School style economists to the core. In their heart of hearts, many would probably love to be back on an international gold standard system.

END_OF_DOCUMENT_TOKEN_TO_BE_REPLACED

The New York Times’ coverage of the euro zone crisis continues to exhibit two related flaws.  First, it is overwhelmingly written from the German perspective – the Berlin Consensus that is driving the crisis.  Second, it continues to ignore economics.  Paul Krugman, the NYT’s Nobel Laureate in economics, has been explaining the economics of the crisis for years in his weekly NYT column.  We know that Berlin either doesn’t read or comprehend what Krugman has been trying to explain, but it is remarkable that so many of the NYT reporters covering the euro zone crisis share their failure to read or comprehend.

END_OF_DOCUMENT_TOKEN_TO_BE_REPLACED

Posted on February 1, 2012 by admin | Comments Off on Marshall Auerback’s Latest Interview on the Euro Crisis

Marshall’s latest take on the state of the Euro crisis can be found here.  For those following the situation there, you won’t want to miss this.