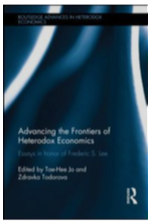 Advancing the Frontiers of Heterodox Economics: Essays in Honor of Frederic S. Lee

END_OF_DOCUMENT_TOKEN_TO_BE_REPLACED

Posted on September 23, 2015 by Devin Smith | Comments Off on UMKC professor among handful of economist to predict Eurozone fiscal downturn

Video and article over at Kansas City’s KSHB highlighting NEP’s Randy Wray’s analysis of the problems with the European Monetary Union and his predictions that it would lead to the European crisis. You can view the video and read the article here.

If the Justice Dept Wants to Punish Corporate Crooks, Here’s How

Posted on September 23, 2015 by Devin Smith | Comments Off on If the Justice Dept Wants to Punish Corporate Crooks, Here’s How

NEP’s Bill Black appears with Richard “RJ” Eskow on the Zero Hour discussing the DOJ’s change in stance regarding prosecuting elite white collar criminals. You can view the video below.

END_OF_DOCUMENT_TOKEN_TO_BE_REPLACED

Comments Off on If the Justice Dept Wants to Punish Corporate Crooks, Here’s How

The creation of new sources of financing and funding are at the center of discussions to promote real capital development in Brazil. It has been suggested that access to capital markets and long-term investors are a possible solution to the dilemma faced by Brazil’s increasing financing requirements (such as infrastructure investment and mortgage lending needs) and the limited access to long-term funding in the country. Policy initiatives were implemented aimed at the development of long-term financing to lengthen the maturity of fixed income instruments (Rezende 2015a). Though average maturity has lengthened over the past 10 years and credit has soared, banks’ credit portfolios still concentrate on short maturities (with the exception of the state-owned banks including Caixa Economica Federal [CEF] and the Brazilian Development Bank [BNDES]).

END_OF_DOCUMENT_TOKEN_TO_BE_REPLACED

A US Climate Platform: Anchoring Climate Policy in Reality (3/3)

Q: I notice that the platform cites amounts of money for some of the government actions proposed and for others it is left open. Why not either leave amounts open or develop a full budget?

A: There are a few reasons for this inconsistency:

1) This document and outline is a starting place for a larger scale development of this approach. Some numbers are there to suggest magnitudes in areas where I am more confident that they will mean something.
2) I have more knowledge in some areas than in others and I am inviting others to discuss either general approaches or the details of this approach. This platform should become a team effort.
3) Some of these amounts, even if they are “right” as a starting place, will need to be adjusted over time as the policy is implemented to maximize the effectiveness of the policy.
4) I, the initiator/initial author, have been only able to devote part of my time to this effort, as I need to earn a living END_OF_DOCUMENT_TOKEN_TO_BE_REPLACED

A US Climate Platform: Anchoring Climate Policy in Reality (2/3)

A US Climate Platform: Anchoring Climate Policy in Reality (1/3)

Below is a provisional platform of policies, acts of Congress, Constitutional amendments or Presidential actions that would represent a serious and appropriate confrontation by US society and government with the upcoming climate catastrophe. This document is meant to start a public discussion on government actions grounded in economic, human and geophysical reality and is therefore provisional. It is divided into the following parts: END_OF_DOCUMENT_TOKEN_TO_BE_REPLACED

END_OF_DOCUMENT_TOKEN_TO_BE_REPLACED

As anyone who’s followed the discussion has seen, the proposal from the newly-elected leader of the British Labor Party, Jeremy Corbyn, to implement “People’s Quantitative Easing” or PQE, has created a lot of controversy (Richard Murphy’s blog is a good place to see the PQE defense against these arguments).  The basics of the proposal are that the government would create a public bank for financing infrastructure (National Investment Bank, or NIB), which the Bank of England (BoE) would then lend to directly in order to fund.  The NIB would then carry out infrastructure projects to jumpstart the economy, create public capital, and create jobs.