Why We Can’t Afford a Bus-Ride 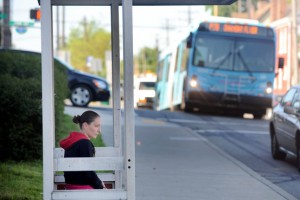 Today I cut out of the Wall Street Journal an article and photo that, in combination, illustrate the absurd plight we have placed ourselves in as a society by insisting that we are too poor to create the things we really need. The article is about the Pittsburgh metro area and how it is drastically reducing its public transit routes (as well as increasing fares) in order to cope with a $64 million deficit in its operating funds. The accompanying photo was of a young, bright-looking mother of two day-care aged children (the article explained) sitting at a bus stop that will soon be removed, waiting not for a ride to her job, but for a ride to a job placement agency where she spends four hours a day looking for work. When her bus route is eliminated, she won’t even be able to get to the placement agency. And this is America, the great achievement of modern civilization. I hang my head in shame.

The word “deficit,” of course, explains it all.  The article tells a familiar story: The public sector has mismanaged its finances. The union wages the metro area is required to pay its bus drivers are excessively generous. (Ralph Cramden, apparently, now lives in a mansion and drives a Mercedes).  Bus driver health care costs are unsustainable, and their retirement benefits are a shameless demand on the “backs of the tax-payers.”  There’s no way people are going to pay more taxes to build new transit lines, or buy modern buses and light rail cars. The governor of Pennsylvania refuses any help whatsoever until the metro area gets its fiscal house in order (presumably, by cutting transit routes even further or, perhaps, busting the union and reneging on retirement and health benefits.) But then, what could the governor do anyway? He can’t spend what he doesn’t have, and states are still struggling, partly due to the fact that people are finding it harder and harder to get to work in the morning (if they have a job) and so are paying the state fewer and fewer taxes. The jobless young mother in the photo presumably pays no state income tax.

There is mention, of course, of a possible federal role in this situation. There is something called a “Transportation Bill” that is currently stuck in Congress.  But even if it gets unstuck, it seems it won’t make any difference, because the bill is actually proposing to reduce the federal funds targeting public transportation. This is necessary, we’re told, because the federal government is the most broke of all. Its deficit is around a trillion dollars, and Congress can’t even think about anything except how to get out the big financial hole it believes it’s in.

What is so shameful about all of this is that the solution is both simple and painless: All that’s required is that we remove the Neanderthal glasses we’re collectively wearing so that we can begin to see and understand that the U.S. dollar is no longer convertible to gold. It has become a modern fiat currency, which can be created and tallied like points on an electronic scoreboard. What looks like a “deficit” through our Neanderthal glasses is really just a spreadsheet entry that shows how many “points” our currency-issuing government has added to the scoreboard by purchasing goods and services from (mostly) American workers and businesses. To even call it a “deficit” is to misunderstand the fundamental dynamic of modern fiat monetary systems.

How would this revelation affect the Pittsburgh metro area? For starters it means the federal government could (without any fear of going broke) immediately declare that it stands ready to pay for the modernization of the public transit systems not just in Pittsburgh, but in every city in the country, including the overhaul and refinancing of union pension and health care programs. It can do this very simply because it is the sovereign currency-issuing entity in our society.  It can use the power of the purse to pay for the goods and services that its citizens are willing and able to provide in exchange for the currency.

It’s as simple as that. And if we could stop thinking like Neanderthals when it comes to how our currency-issuing government really works, the young mother in the photo would not only get to keep her bus-route, but the next time she goes to the job placement center, she might actually find employment.

This entry was posted in Uncategorized. Bookmark the permalink.

21 responses to “Why We Can’t Afford a Bus-Ride”