On June 13, 2011, the New York Times wrote an exasperated editorial entitled “Nearly a Year After Dodd-Frank.”  It began by warning that:

Without strong leaders at the top of the nation’s financial regulatory agencies, the Dodd-Frank financial reform doesn’t have a chance. Whether it is protecting consumers against abusive lending, reforming the mortgage market or reining in too-big-to-fail banks, all require tough and experienced regulators.

The editorial ended with this sentence:  “It’s past time for President Obama to take off the gloves.”

It’s been nearly two years since the passage of the Dodd-Frank Act.  A year ago, it was indeed “past time” for President Obama “to take off the gloves.”  Today, if anyone still believes that President Obama ever desired to “take off the gloves” it is past time to take off the blinders and see the reality of crony capitalism.  The international competition in laxity in financial regulation continues, but the domestic competition in regulatory laxity is between the Republicans and Democrats.  It was on display at the Senate hearing on JPMorgan’s losses which morphed into an assault on Dodd-Frank and regulation and represented such a nadir in congressional oversight that the American Banker – the trade press – slammed the Senators’ competition in sycophancy towards Jamie Dimon as “obsequious.”

The first action that the NYT was urging the administration to take was to criticize publicly the Republican’s blockage of the appointment of financial regulatory leaders.  (Republican readers: consider for a moment what the Republican Party would have done had a Democratic Senate minority used the filibuster to block the nomination by a Republican President of a Nobel prize winning economist to the Board of Governors of the Federal Reserve – on the purported grounds that he lacked economic competence.)  The editorial noted that President Obama had selected Martin J. Gruenberg to head the FDIC.  A year later, Gruenberg remains an “acting” head of the FDIC.  Gruenberg is a lawyer and long-time congressional aide to former Senator Sarbanes.  No one seriously thinks he will “take off the gloves” and lead the vital transformations of the banking industry.

The editorial also supported Thomas Curry, Obama’s choice as head of the Office of the Comptroller of the Currency (OCC) and the appointment of Elizabeth Warren to run the Consumer Financial Protection Bureau.  President Obama refused to appoint Warren because of industry opposition.  Curry is a lawyer and the rare professional regulator.  He has a long career as a senior state banking regulator for Massachusetts and has served as an FDIC Director since January 2004.  That means, however, that he was in a position of power during the developing crisis – and took no effective action to prevent or limit the crisis.  I know of no evidence that he protested the FDIC’s disastrous MERIT examination system, which crippled FDIC examination or fought publicly to prevent the evisceration of the agency by personnel cuts.  He was in a position of power when the FBI warned in September 2004 that there was an “epidemic” of mortgage fraud that would cause a financial “crisis” if it were not contained.  He was in a position of power when the mortgage industry’s own anti-fraud unit (MARI) warned that liar’s loans were “an open invitation to fraudsters” and had a fraud incidence of 90 percent.  I know of no evidence that he warned of the coming catastrophe and pushed to take emergency action against the raging epidemic of mortgage fraud.

The FDIC regulates smaller banks.  It had the strongest regulatory leader during the crisis (Sheila Bair).  Though she had far more power than Curry, she did not take off the gloves and protect the nation from the fraudulent lenders.  The FDIC has the strongest regulatory tradition.  The OCC, by contrast, regulates the largest (national) banks.  The OCC, the Federal Reserve, and the late Office of Thrift Supervision (OTS) all disgraced themselves during the crisis as virulent anti-regulators.  In particular, the OCC viewed financial derivatives with great favor and opposed adoption of the Volcker rule.  The OCC was the most aggressive opponent of state regulation and enforcement against predatory and fraudulent lenders through preemption.  Curry, therefore, faced an exceptionally difficult task if he intended to clean house at the OCC and turn the agency into a leading part of the solution instead of a major contributor to the problem.

Curry, therefore, was exceptionally unlikely to “take of the gloves” and get in a bare knuckled brawl with the industry.  There was no realistic prospect that he would remove the fraudulent CEOs from office, take on the systemically dangerous institutions (SDIs) treated as “too big to fail,” crack down on speculation in derivatives, conduct vigorous investigations of the frauds and unsafe and unsound practices, and make the necessary criminal referrals. 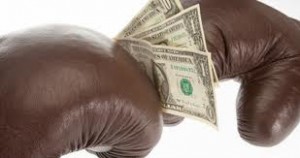 Regulatory “cops on the beat” are essential for honest financial markets in large economies.  When cheaters gain a competitive advantage markets become perverse.  A Gresham’s dynamic causes bad ethics to drive good ethics out of the market.  Crony capitalism creates the illusion of free markets and competition, but is actually a massive extraction of “rents” in favor of the officers that control the favored firms and their political and business cronies.  JPMorgan, and the other SDIs, are the new Fannie Maes.

Any serious effort by the administration to “take off the gloves” would require a replacement for Attorney General Holder.  The nation’s chief law enforcement officer has been missing in action when it comes to the elite frauds that drove the fraud epidemic and the resultant financial crisis and Great Recession. Choosing new financial regulatory leaders for the SEC, OCC, and the FDIC willing to take off the gloves and transform the financial industry to end the increasingly criminogenic environments that drive our recurrent, intensifying crises is essential.  Regulators, however, cannot prosecute and Holder has shown that he will not take off the gloves when it comes to the elites that drove the crisis.

We also must not forget the destructive role that Timothy Geithner plays in the Obama administration.  He is the man who failed catastrophically as a regulator when he was President of the Federal Reserve Bank of New York.  Obama’s elevation of this failure to be his principal economic leader and advisor signaled that Obama had no desire to take off the gloves, end the criminogenic environment, and hold the elite frauds accountable.  Instead, Geithner has claimed that we must not prosecute, or even investigate the elite frauds lest they destroy the economy.  It is vain to debate whether Geithner’s doctrine of impunity for elite bankers is more disturbing as a matter of practicality or ethics because it fails utterly on both dimensions.

The quaint aspect of the NYT editorial is that the editors still hoped in mid-2011 that the problem was that Obama wanted to take the gloves off and take on the elite frauds, but was blocked by Republicans from doing so.  Had they editorial writers considered the significance of Obama choosing Larry Summers, Holder, and Geithner (and reappointing Bernanke) – all great supporters of the financial elites and opponents of effective financial regulation – they could not have written such a naïve piece.  A year later, nearly two years after the Dodd-Frank bill was adopted by Congress, there is no chance that the NYT would write an editorial premised on the implicit assumption that Obama wants to “take the gloves off” and knock out the elite bank frauds.  No one thinks that either political party has any desire to take the gloves off and go after the elite bank frauds.  Crony capitalism is our only truly bipartisan policy.  It typically wins by a TKO because there is no opponent in its weight class willing to answer the bell and come out of the corner to fight.  No politician wants to fight his or her leading source of political contributions.

Bill Black is the author of The Best Way to Rob a Bank is to Own One and an associate professor of economics and law at the University of Missouri-Kansas City. He spent years working on regulatory policy and fraud prevention as Executive Director of the Institute for Fraud Prevention, Litigation Director of the Federal Home Loan Bank Board and Deputy Director of the National Commission on Financial Institution Reform, Recovery and Enforcement, among other positions.

Bill writes a column for Benzinga every Monday. His other academic articles, congressional testimony, and musings about the financial crisis can be found at his Social Science Research Network author page and at the blog New Economic Perspectives.