That Germany has pursued something of a neo-mercantilist growth strategy is no great secret. Even newly minted econoblogger Ben Bernanke (apparently, Fed Chair pensions are not what they used to be) has duly noted Germany’s ascension to the throne of the Chief Instigator of Global Imbalances (CIGI) in his post dated April 3, 2015 (see here). At 7% of GDP, Germany’s trade surplus has clearly unseated China’s prior well-vaunted position as CIGI. Clearly, Frankfurt, not Shanghai, has become the new capital city of Global Saving Glutistan, in the nation of West Secular Stagnationa.

END_OF_DOCUMENT_TOKEN_TO_BE_REPLACED

Draghi’s Doom Loop(s): More than just the euthanasia of the rentiers

Posted on April 7, 2015 by Devin Smith | Comments Off on Draghi’s Doom Loop(s): More than just the euthanasia of the rentiers

The recently adopted QE approach by the ECB, in concert with the negative deposit policy rate (NDPR) introduced last summer, has set off a number of nested disequilibrium dynamics that may unwittingly introduce a material increase in systemic risk for the eurozone, and perhaps beyond. Lord Keynes anticipated what he termed ”euthanasia of the rentiers”, as he expected active monetary policy would be successful in reducing long-term interest rates, and the share of the population living off of bond coupons would eventually just wither away. By way of contrast, if the following assessment is correct, Draghi may have signed a mutually assisted suicide pact with finanzkapital in the eurozone.

END_OF_DOCUMENT_TOKEN_TO_BE_REPLACED

Comments Off on Draghi’s Doom Loop(s): More than just the euthanasia of the rentiers

Why Understanding Money Matters in Greece

As Greece staggers under the weight of a depression exceeding that of the 1930s in the US, it appears difficult to see a way forward from what is becoming increasingly a Ponzi financed, extend and pretend, “bailout” scheme. In fact, there are much more creative and effective ways to solve some of the macrofinancial dilemmas that Greece is facing, and without Greece having to exit the euro. But these solutions challenge many existing economic paradigms, including the concept of “money” itself.

At the Levy Economics Institute conference held in Athens in November 2013, I proposed tax anticipation notes, or “TANs”, as a way for Greece to exit austerity without having to exit the euro (see “Get a TAN, Yanis!” published here last month, for an updated version of that policy proposal). This proposal is based on a deeper understanding of what money actually is, and the many roles that it plays in the economies we inhabit. In this regard, Abba Lerner captured the essence of modern fiat currencies, which are created out of thin air by modern states with sovereign currency arrangements. Lerner’s essential insight is contained in the following passage from over half a century ago (and, you will note, Lerner’s view informs much of the neo-chartalist view espoused by advocates of what is called Modern Monetary Theory):

END_OF_DOCUMENT_TOKEN_TO_BE_REPLACED

Get a TAN, Yanis: A Timely Alternative Financing Instrument for Greece

The recent election of an explicitly anti-austerity party in Greece has upset the prevailing policy consensus in the eurozone, and raised a number of issues that have remained ignored or suppressed in policy circles. Expansionary fiscal consolidations have proven largely elusive. The difficulty of achieving GDP growth while reaching primary fiscal surplus targets is very evident in Greece. Avoiding rapidly escalating government debt to GDP ratios has consequently proven very challenging. Even if the arithmetic of avoiding a debt trap can be made to work, the rise of opposition parties in the eurozone suggests there are indeed political limits to fiscal consolidation. The Ponzi like nature of requesting new loans in order to service prior debt obligations, especially while nominal incomes are falling, is a third issue that Syriza has raised, and it is one that informed their opening position of rejecting any extension of the current bailout program.

END_OF_DOCUMENT_TOKEN_TO_BE_REPLACED 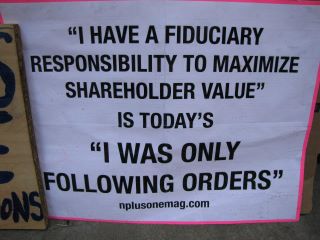