But why not just create more? Is it really that hard to come up with a list of things that people could usefully do, right here in America?

As Sasha writes, things appear to have improved in America,

“Yet scratch below the surface and you’ll see that the United States still has a considerable economic problem. While the official unemployment rate has fallen to 5.6 percent, the lowest since 2008, the percentage of the adult population participating in the labor market remains far lower than it was at the start of the recession. At least in part, headline unemployment numbers look respectable because millions of Americans have grown so discouraged about their prospects of finding work that they no longer try, and thus are no longer counted among the unemployed. Depending on the measures, only 59 to 63 percent of the working-age population is employed, far below recent historical norms.

Millions who lost their jobs during the recession have found work, but at lower wages and often for fewer hours per week than was the case before the financial collapse. In August, the US Conference of Mayors released data indicating that jobs created during the recovery paid an average of 23 percent less than jobs lost during the recession. That represents an extraordinary collapse in living standards for millions of people. Not surprisingly, according to the latest data, nearly one in six Americans are living below the federal poverty line.”

Unemployment remains far too high–and, more importantly, the employment rate remains far too low–because there are not enough jobs. Job seekers exceed job openings by a wide margin, across the entire spectrum of sectors. Here’s the latest data I could find (2012, and while things have improved a bit, it is not likely that we’d see much difference in 2014 data): 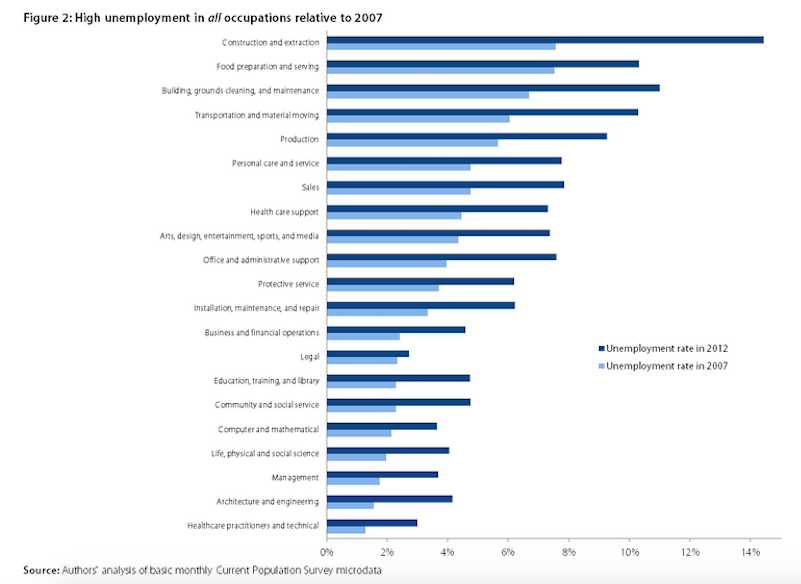 No matter where you look, there are plenty of job-seekers. And these data do not include those who’ve given up hope: official unemployment rates only include those actively seeking work. If you only hide 5 bones and send out 10 dogs to find them, you can be sure at least 5 dogs come back boneless. That’s what it still looks like across all sectors of our economy–far too few jobs out there. Five years into “recovery”. And with what looks like a possible slow-down coming.

This entry was posted in L. Randall Wray and tagged greece, jobs, unemployment. Bookmark the permalink.

9 responses to “Jobs for Greeks and for Americans, Too”