Speculation in the Commodities Market: Part 2 A Response to Price Asset Management

Recently, a nice man named George H. Rohrs Jr. from Price Asset Management, a firm that specializes only in commodities and managed futures investments, emailed me a copy of the newsletter his firm sent to clients in which he wrote a response to my article on commodity funds. Mr. Rohrs asserted:

I wouldn’t call Ben Strubel, the author of this article “stupid.” I would just call him “ignorant” and “unprofessional” and “biased.” I just believe that he ought to get his facts straight before embarrassing himself by publishing the compendium of misinformation contained in his article.

I wouldn’t call Mr. Rohrs an expert in the usage of quotation marks but I would call him a man with some very strong opinions about me. Let’s look at the points he raises in his article and find out if I am in fact ignorant, unprofessional, and biased. Okay. I’m currently sitting in my office not wearing my shoes, so I’ll cop to the unprofessional part.

Before we find out if I’m ignorant, I want to explain what my business is and how I am compensated. My firm is a registered investment advisor, and we provide fee-only wealth management services to clients. We charge a flat 1% of assets per annum for portfolios we manage. Notwithstanding our 401(k) advisory business and hourly consultation engagements, we get paid 1% of client assets no matter what investments we make for the client. If we bought stocks, bonds, mutual funds, ETFs, index funds, actively managed funds, domestic stock, international stock, penny stocks, or mega cap stocks, the client still pays us 1%, no matter what. If we bought commodity stocks or commodity funds for clients, then we would still make 1%. Even if we invested client money with Mr. Rohrs’ firm, we would still charge 1%. So we are the very definition of unbiased. Our only goal is to manage client investment portfolios to help clients meet their financial goals. It’s in our best interest to choose the best possible investments, no matter what they are, for inclusion in client portfolios. I’m not sure how it is possible for me to be biased in the investment selections we make for clients as I have no personal financial incentive to choose one investment over the other.

Now, let’s investigate whether or not I’m ignorant. Let’s go through some of Mr. Rohrs’ arguments.

His first point is excerpted below (emphasis his):

He [Ben Strubel] says that the idea of investing in commodities for price appreciation understates the ability of humans to simply come up with alternatives and improved technology to produce more. He gives specific examples via charts, in the article, showing how the yields per plant on corn and soybeans have increased dramatically over the years.

In response, I would call Mr. Strubel’s attention to remarks made by David Hightower, publisher of the widely followed Grains publication, the Hightower Report, at a presentation at the Chicago Mercantile Exchange on June 27, 2013 just before a USDA Update Report on Grains production and inventories. Here is what I wrote then.

“I attended a presentation at the Chicago Mercantile Presentation, this afternoon, on the subject of tomorrow’s USDA Acreage Report on Grains.

“A major reason I wanted to attend was because David Hightower, publisher of the Hightower Report, was listed as one of the presenters. I believe the Hightower Report to be the best commodities’ research published. Another member of his team gave their specific outlook for tomorrow’s USDA Report. However, Mr. Hightower took the opportunity to share with the audience a dramatic conclusion that he has come to. He said, ‘I am convinced that we are near a major commodities bottom across the board.’ With regard to Grains, he asked the audience ‘to consider that the world has had five consecutive years of record grain production, and that inventories are at 40 year lows. What does that tell you?’ he asked.”

“Mr. Hightower said he was in China recently and that their consumption of commodities is and will continue to be “voracious.” As an example, he showed a graphic of the pig population in countries around the world. China has 446 million pigs. The second largest number was in the United States with 66 million. New car registrations in China now considerably exceeds the U.S.”

I’m not entirely certain what his point is. If it is that David Hightower knows more about grain production than I do, I would have to assume that is correct. At the risk of putting words in someone’s mouth, I’m going to make the assumption that Mr. Rohrs’ thinks my assertion that investing in commodities is a bet against human ingenuity and that improved mining and agricultural techniques will allow commodity production to keep pace with demand is incorrect.

Below is yet another chart that shows human innovation increasing supply. The chart below shows the yield (in kg) per hectare for cereal production (soy, maize, wheat, rice, barley, oats, etc) in the world from 1967 to 2012. 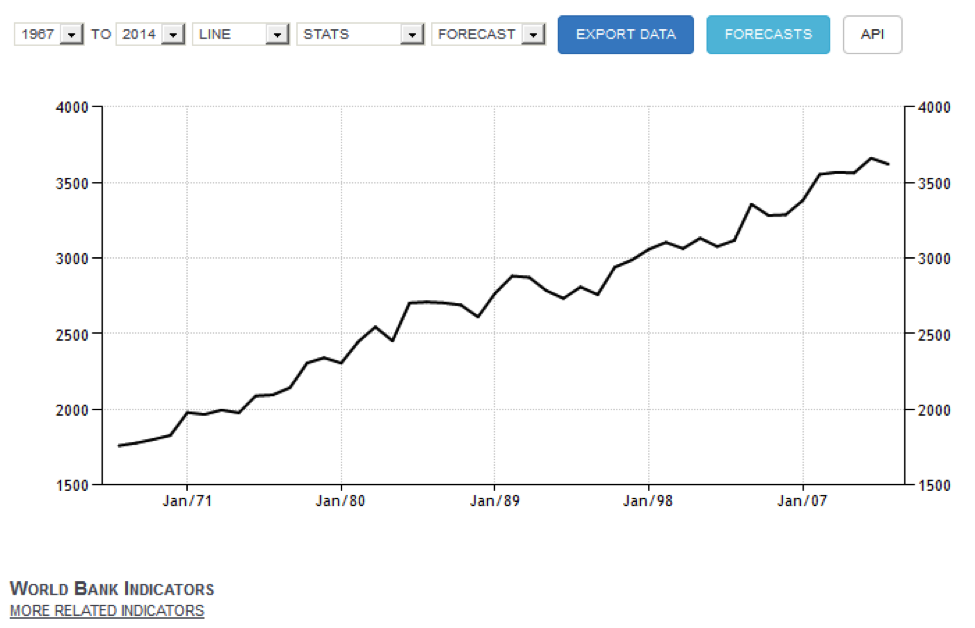 Cereal yields have gone from about 750kg/hectare to well above 3500kg/hectare. As demand for commodities increases, so too does the technology and innovation allowing ever more of them to be produced.

The issue is whether or not supply is meeting demand. Here again the answer is obvious. For decades commodity prices have tracked demand. Only with the advent of the “indexing era” and the flow of over $300B in speculative assets in to the commodity markets have prices become unhinged from demand. 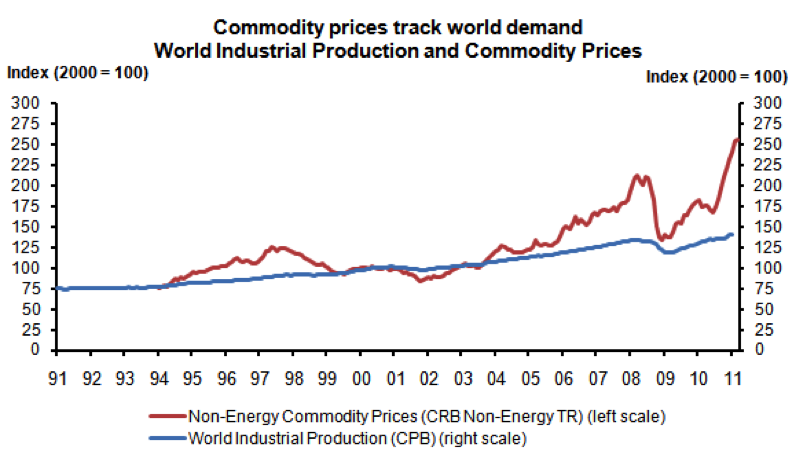 The huge spike in commodity prices has not come from increased demand. As you can see from the graph, world industrial production (a good proxy for commodity demand) is increasing but not at a pace to justify current commodity prices.

We also have the issue of substitution. If one resource becomes scarce, then it is possible to substitute a different resource. Assuming that the demand for one particular commodity will not fall and that substitutes will not be found seems strange.

Also, Mr. Strubel claims commodities over the long-term have produced no real return. The RICI started trading in August 1998. If you look at the attached graphics, you will see that since that date, through January 2014, the RICI’s Total Return has been 250 percent versus that for the S&P 500 at 112 percent. Also, if you look at the attached table ranking all the investment indices on the Barclay Hedge database, over that period, you will see that the RICI has outperformed most of the indices, whether stocks, bonds or hedge funds.

That brings us to my assertion that Mr. Strubel’s reporting is “biased” and “unprofessional.” He cites the example of the NYSE shares tracking the Rogers International Commodity Index, called “Elements” as the worst performing commodities fund investment there is, down -20 percent since inception. What Mr. Strubel fails to point out is that the Elements shares only began trading in November of 2007, just before the sub-prime markets crash in 2008. That produced the worst recession since the Great Depression. Jim Rogers called it “a forced liquidation of assets that has only occurred 8-9 times in history.” The RICI was down -41 percent in 2008. However, the S&P 500 was down -37 percent in 2008.

Now we have a big problem. You cannot invest in an index. You can invest in a fund that tracks a certain index, but you cannot invest in the index itself. If you wish to invest in the Rogers International Commodity Index, then you must chose a product that tracks that index. The Elements Fund (RJI) is such a fund. The performance of the RICI index and the performance of RJI, an ETN fund, are two separate and distinct things. The RJI fund was chosen for inclusion because it was the largest fund, with $650M in assets, which tracked the RICI index according to ETFdb.com thus the fund most likely to be held by real, actual investors wishing to invest in a manner similar to the RICI Index.

The fact that the RICI index existed in 1998 is of cold comfort to investors who were unable to invest in a major, retail level product that tracked it until RJI.

The other question is how will an index perform once there are a large amount of assets tracking that index? History is littered with investing strategies that appeared to work on paper, backtested against data sets, or tracked as a model. Only when actual investments were made have they found out that the effect of making the prescribed trades or investments has erased some or all of the predicted returns. When discussing returns, I prefer real, tradable, investable products rather than paper indexes when at all possible.

As for the original portion of my argument, I will once again publish the findings from SG Cross Asset Research that show the returns for stocks, bonds, and commodities since 1871. 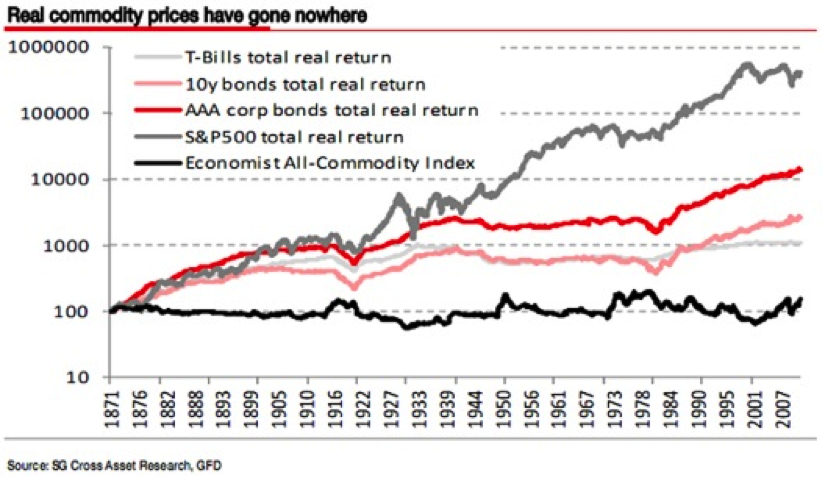 Except for the recent spike in the past decade, commodities have returned zero real dollars to investors. Zero. There have been various times (1950s, mid-1970s, mid-2000s, etc.) where commodities had positive returns, but they eventually gave up their gains.

Mr. Strubel says academic studies have shown strong correlations between commodities and other asset classes such as stocks, bonds and real estate. Consider, however, the following comparative returns for the RICI and the S&P 500 since August 1998, but divided into two periods – through June 2008 and then from July 2008 through December 2013.

So much for the correlation between commodities and stocks.

I’m not sure what Mr. Rohrs is doing splitting the time period into two based on an arbitrary date. His doing so brings to mind the saying of one of my grad school professors: “Statistics is the art of torturing the data until you get the answer you want.” I have a feeling that in this case the data has been thoroughly water boarded.

Below is one of the graphs taken from the paper, which shows how commodities indices have become increasingly correlated with stocks. 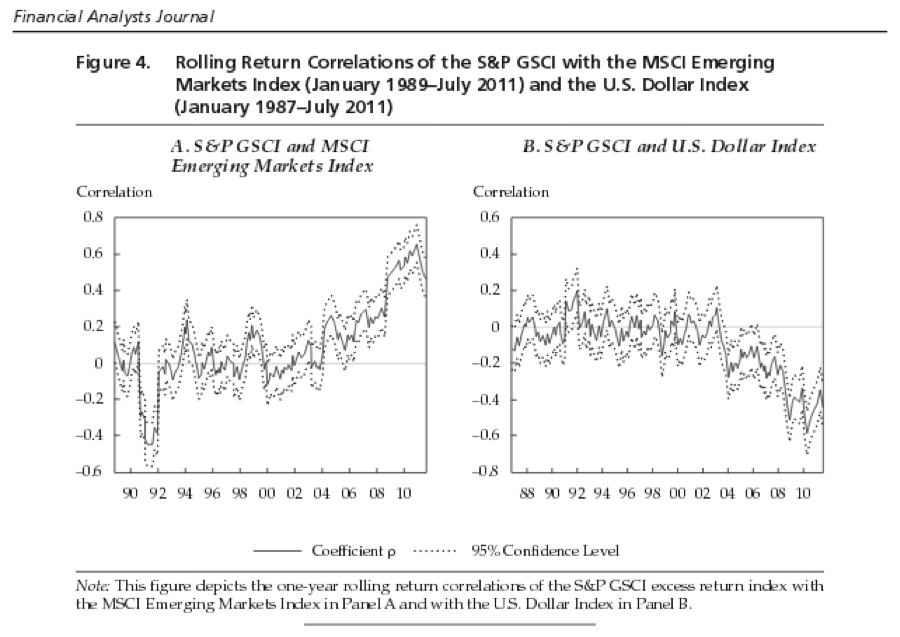 The GSCI index is chosen in the paper because of the large amount of assets that track that index.

Rather than writing endless articles, I have an idea. Perhaps Mr. Rohrs would like to cease his unprofessional personal attacks on me and put his money where his mouth is. Want to make a friendly wager? The loser donates an agreed upon percentage of their firms profits to a non-profit or charity of the winner’s choice (mine will be Better Markets). Oh, and since Jim Rogers participated in the email chain as well, I’ll bet Jim a bow tie. If I win, I get an authentic autographed bowtie that has been worn by Jim Rogers himself. If I lose, I’ll buy him a new bowtie for his collection. I’m willing to bet that a portfolio composed of traditional assets like stocks, bonds, and real estate will outperform a commodities investment of Mr. Rohrs’ choice that is available to the average retail investor.

My submission for the bet is as follows:
A portfolio to be rebalanced each year with a weighting as follows:

Since the argument is about the merits of certain investment classes as not the skill of managers I have chosen a portfolio unmanaged index funds in traditional assets classes including stocks, bonds, and real estate.

The winner will be the person with the portfolio that delivers the highest risk-adjusted returns over the next 10 years.

6 responses to “Speculation in the Commodities Market: Part 2 A Response to Price Asset Management”