Maximizing aggregate utility is the alpha and the omega of classical economics.  It’s all part and parcel of the larger Modernist project of crafting “a human science that will make us masters and possessors of nature” so that we can make our lives on this earth more secure and more comfortable (Michael Allen Gillespie, The Theological Origins of Modernity).   So who, we might ask, could be against this?

Well, the Pope for one.  We were reminded of this once again this last week, as The Guardian reports:

Parolin, a 58-year-old Italian who like Francis is known for his frugal lifestyle, is currently the Vatican’s nuncio in Venezuela.

“Encountering Jesus and rejecting worldliness” is how Wikipedia puts it.    “Francis established a simple and austere style,” explains Maciek Wisniewski.  “He avoids decorative garments, opted for a ring and cross of silver, he wears old black shoes, refused a luxurious apartment; more than once he said he wants a Church poor and for the poor.”

Most Christians have never bought into the Classical ideology which “began by being mundane and ended with a dualism in which it saw the universe as an evil material world opposed to a good spiritual sphere.  Western ideology believes that the material is good and the spiritual is better but that they are not opposed to each other since the material world is necessary for the achievement of the spiritual world” (Carroll Quigley, The Evolution of Civilizations). We see this, for instance, in the theology of the Rev. Martin Luther King:

But in spite of these shortcomings Rauschenbusch had done a great service for the Christian Church by insisting that the gospel deals with the whole man, not only his soul but his body; not only his spiritual well-being but his material well-being. It has been my conviction ever since reading Rauschenbusch that any religion which professes to be concerned about the souls of men and is not concerned about the social and economic conditions that scar the soul, is a spiritually moribund religion only waiting for the day to be buried.

However, the Catholic Church has always struggled to maintain a healthy balance between the spiritual and the material, and especially when it comes to the princes of the Church.

The current bout of austerity comes in the wake of a “vitiated and bureaucratic Roman Curia, where there are economic and political interests in lieu of its being a dwelling place for those of higher callings.”  Due to the “Vatileaks,” a leak of confidential documents from the Vatican, the unbridled greed and corruption of the Catholic hierarchy has been put on view for all to see.

All of this harkens back to the so-called Poverty Dispute of the 13th and 14th centuries, which also came in reaction to a priestly caste which was consumed by an orgy of material this-worldliness.  St. Francis, who stood at the opposite extreme on the theological spectrum from the Aristotelians, called for a more original or “primitive” Christianity that took its bearings not from the philosophical ideas of the Greeks and the corrupt political structures of the Roman state but from the example of Christ.  The Christian life, he argued, was not to be found in papal palaces and curial power but in poverty and asceticism.  Francis argued that to be a Christian one must walk with Christ, retracing the via dolorosa.  He embodied this dedication to suffering in his own asceticism (and stigmata) and enshrined it in his famous Rule that imposed austerity and poverty upon his followers.

Pope John XXII recognized that the doctrine of poverty not only threatened his power within the church but also threatened to transform Christianity as a whole.  The medieval church understood itself as the embodiment of the Holy Spirit and thus as exercising God’s dominion or kingship on earth.  Churchmen thus imagined that they should live in a manner befitting their status.    The Franciscan doctrine of poverty challenged this view.  Taken to its extreme, such a doctrine was thus not merely an attack on priestly wealth and power; it was also an attack on clerical hierarchy and on the church itself. (Michael Allen Gillespie, The Theological Origins of Modernity).

Pope Francis’s neo-Franciscancism, however, has drawn harsh criticism from left-wing Catholics, who note that his rise to power was largely due to his close working relationship with the powerful oligarchic class in his native Argentina.  “The ‘papal austerity’,” Maciek Wisniewski charges, “instead of revealing the mechanisms of the dominant order, covers them up.”   “The new Pope follows the traditional social doctrine of the Church,” he continues, “where the poor are merely objects of charity, not subjects of their own history who should be liberated.”  “With his ‘cult of poverty’ he offers nothing more than a spiritual component to the ‘authoritarian austerity’ of Europe”:

Pope Francis criticizes our cult of money (“golden calf”), but does not question our faith in capitalism.  His neo-Franciscanism is not a tool of liberation, but a new disciplinary strategy; it is not directed at the system, nor at the bankers, but at the common people.  It is a mechanism of control that seeks to make the crisis more manageable and to make us assume its costs.  The “papal austerity,” like Foucault’s “politics of detail,” seeks to show us the virtues of “living with less” and of “asking for less” (salaries, benefits, rights, services), to content us with “the little that is” and neutralize the political force of poverty.

In lieu of this debate, one wonders what motivated Jimmy Carter’s “crisis-of-confidence speech” in the summer of 1979.  Was it due to an empirically oriented belief:   a belief that the Malthusian trap was once again clamping down upon us?  Or was it due to a metaphysically oriented belief:  a throwback to the materialism-only and then anti-materialist philosophy which came down to us from Classical Civilization?

“In a nation that was proud of hard work, strong families, close-knit communities, and our faith in God,” the president moralized,

too many of us now tend to worship self-indulgence and consumption.  Human identity is no longer defined by what one does, but by what one owns.  But we’ve discovered that owning things and consuming things does not satisfy our longing for meaning.  We’ve learned that piling up material goods cannot fill the emptiness of lives which have no confidence or purpose.

I personally am very skeptical of anything Carter says.  I do not trust his motives, because it was Carter, after all, who fired the first volley in the war on the working class.  As Christian Parenti explains in Lockdown America, labor’s demise was deliberately engineered. It was a deliberate and intentional policy decision which began with Carter.  Reagan then took the ball and ran it through the goal posts. It happened because capital was getting squeezed, which can clearly be seen in this graph: the low-point in business net income, net capital gains and other income occurred in 1981-1982: 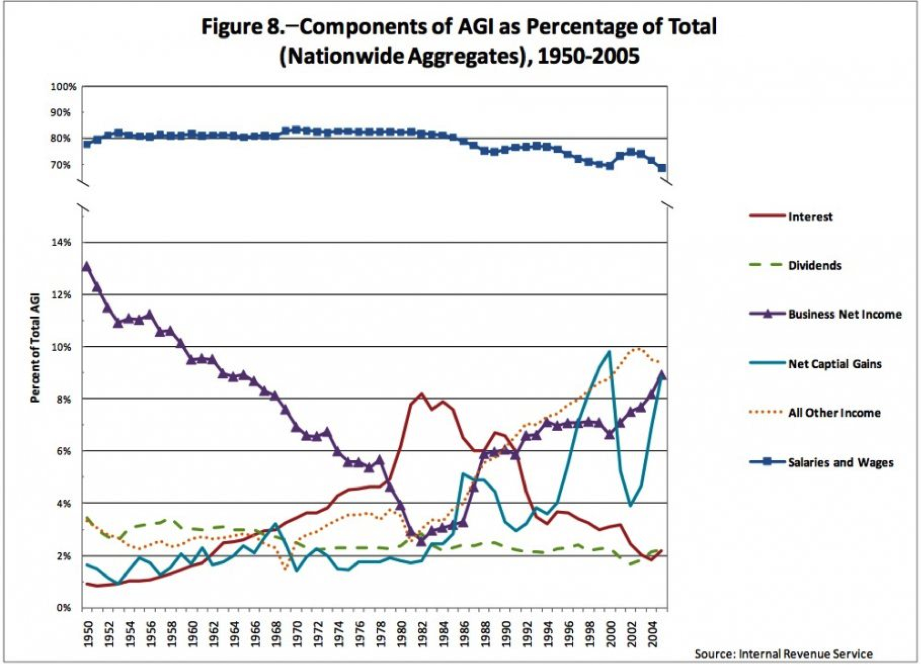 Here’s how Parenti explains it:

Regardless of the exact etiology of the profit slump, one thing is for sure, the solution to the crisis was, as we shall see, to attack labor…

The crisis of the seventies was finally dealt with in 1979 when Carter appointed Paul Volcker as Chairman of the Federal Reserve; it was the opening salvo of a “new class war.” Late in 1979 Volcker dramatically tightened the money supply by boosting interest rates, thus cutting borrowing power and buying power, and diminishing economic activity in general. This monetarist squeeze accelerated when Reagan took office, until interest rates, which had been 7.9 percent in 1979, reached 16.4 percent in 1981. As a direct result, the US economy plunged into its most severe recession since the Great Depression.

In the eyes of Paul Volcker this was a good thing. For the economic stagnation and low profits of the seventies to be vanquished the American people would have to learn how to work harder for less; Reagan’s plan was to cut taxes on the rich, gut welfare, and attack labor. As Volcker told the New York Times: “The standard of living of the average American has to decline… I don’t think you can escape that.”

In 1981 as the recession was reaching new depths and many in Congress were calling for relief, Volcker again explained the utility of his artificial disaster: “in an economy like ours with wages and salaries accounting for two-thirds of all costs, sustaining progress will need to be reflected in moderation of growth of nominal wages. The general indexes of worker compensation still show relatively little improvement, and prices of many services with high labor content continue to show high rates of increase.” The chairman’s goal was labor discipline. The recession — though hard on businesses, particularly small firms — had not yet achieved its purpose: wages were still rising.

Not until the behemoth First Illinois Bank collapsed under the weight of its bad loans and Mexico seriously threatened a default on its $90 billion foreign debt did Volcker relent and open the Fed’s spigots, easing interest rates and making credit available throughout the economy, thus stimulating economic activity. But according to Harrison and Bluestone,

the deep recession did precisely what it was designed to. With more than ten million people unemployed in 1982 it was impossible for organized labor to maintain wage standards let alone raise them. Reductions in wages rippled from one industry to the next and from the center of the country outward. The real average weekly wage fell more than 8 percent between 1979 and 1982, and failed to recover at all in the next five years. Essentially, with wage growth arrested by unemployment, what growth occurred during the Reagan period rebounded mostly to the profits side of the capital-labor ledger.

Before the 1980-82 cold-bath recession, wage freezes and pay cuts in unionized industries had been almost non-existent… By 1982, 44 percent of new contracts conceded wage freezes or outright cuts.

This entry was posted in Guest Blogger and tagged utility, vatileaks. Bookmark the permalink.

One response to “Maximizing aggregate utility: Good or bad?”