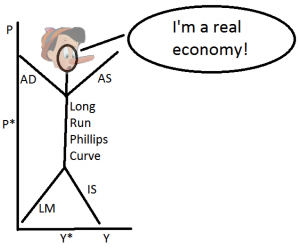 Stick figure economics treats mankind as a representative homo oeconomicus – a person (and an economy) neatly stripped of all flesh, blood, and pesky three-dimensional idiosyncrasies.

Whereas you and I have corporeal arms and legs, our prototype stick-figure friend is equipped with perfectly straight two dimensional lines, running approximately alongside where its** bone marrow would be, if it had either bones or bone marrow.

Stick figures have some significant and compelling properties, among which are that they are perfectly flexible. Whereas you, I, and even Ulyana Trofimova have our limits, a stick figure’s appendages can be easily rotated 360 degrees on the chalkboard of your choice. It is not difficult to draw a perfectly vertical LM curve on a piece of paper, regardless of empirical evidence. 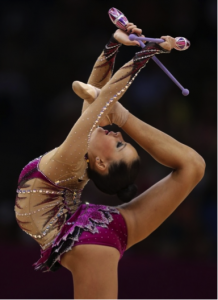 Not bad, Ulyana, but doesn’t quite measure up to the stick figure ideal…

The word “perfect,” here, is important. “Perfection” abounds in economics (though not in economies). In economic theory, there can be perfect competition, perfect information, perfect substitutes, and perfection in all its other manifold forms.

But after long enough being hypnotized by the stick figure as its curves are shifted first to the left, and then to the right, a subtle transformation can take place. The economic stick figure model becomes not just a “model” in a merely descriptive theoretical sense, but begins to take on new normative dimensions.

The stick figure model then comes to represent a sort of “new model human” which, implicitly, we should all emulate – simultaneously precisely the same as and simultaneously the polar opposite of the “New Soviet Man” of the 1920s, or of Mao’s “New Socialist Man.” The stick figure takes on a third dimension and crawls out of the chalkboard and into the real world, like an archetypical monster from an Escher picture. 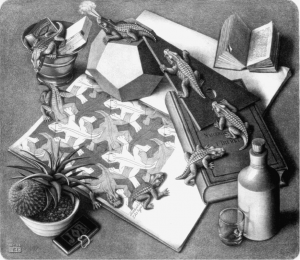 Even if you scrape all the flesh off of a human arm, you are left not with a perfect mathematically abstract straight line, which takes up no space, but rather with a collection of bones. A skilled sculptor could then turn those bones into a set of very thin, straight, rods, but the joints between the rods will never allow the rod-skeleton to reach the standard of “perfect” flexibility embodied by the abstract stick figure model. Policy makers may then try to stretch the skeleton by placing it on a rack and pulling as hard as they can on all the limbs in all directions, but that won’t do the trick either. 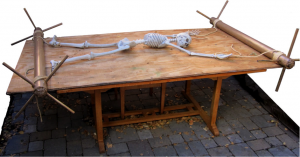 Remember - it’s all for your own good, to make you more flexible…

It turns out that there is a flaw in the argument (assumption) that anything that we can do to make the real economy more flexible (like a good model stick figure) is preferable to allowing it to remain as it is, in its “imperfectly” flexible state.

As Paul Krugman noted a few days ago, despite the tireless efforts of “reformers” in the Eurozone over the last several years, there has only been a decrease in wages in Greece. And in the case of Greece, that has come at the cost of a staggering 65% (!!!) youth unemployment rate. 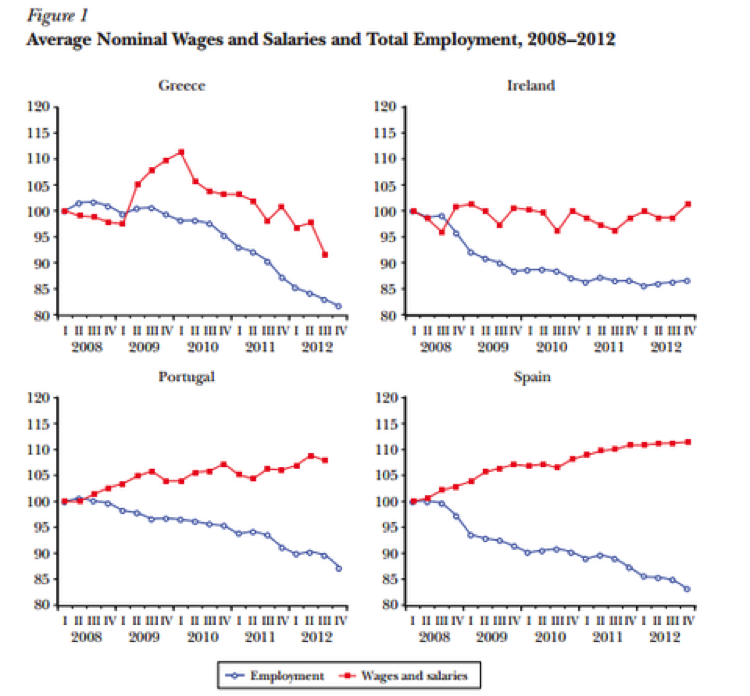 ** Since the representative figure is neither a man nor a woman, we will have to call it an “it.”

This entry was posted in Guest Blogger and tagged stick figure economics. Bookmark the permalink.