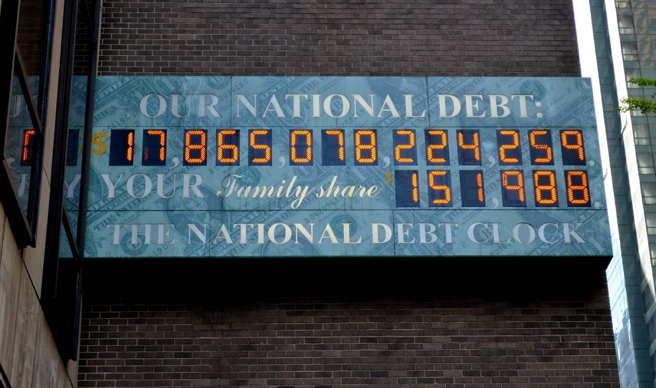 So, we resolve to put a cap on the “national debt.” Which everyone feels good about until the federal government starts running out of tax-dollars to meet the expenses Congress has already committed it to meet. When that happens, the government—or crucial parts of it—painfully shut down. And the fault lies with whoever voted for all that spending in the first place—or whoever voted for all those tax-cuts that made the spending impossible. In the end, after everyone has been thoroughly blamed, the cap on the “national debt” is, of necessity, raised a little higher into the clouds, like Jack’s beanstalk.

Meanwhile, of course, it’s impossible to even discuss the need to spend new dollars to address any of the dire and critical things America confronts as a collective society. We can’t repair our dangerously impaired highway bridges. We can’t modernize our air-traffic control system. We can’t replace our failing, lead-polluted, water-systems. We can’t clean-up the super-fund sites leaching toxins into our ground-water. We can’t provide free pre-school day-care to every mother who wants to secure a job. We can’t modernize and guard from cyber-attack our national electric grid. We can’t provide healthy food and safe accommodations for homeless families. We can’t provide Medicare for every American. We can’t build affordable housing for families earning the minimum wage. We can’t provide a post-high school education for our nation’s workforce. We can’t build modern transit systems that relieve the congestion and gridlock of our urban centers and corridors. We cannot even begin to plan for the relocation and/or rebuilding of millions of square miles of human infrastructure and habitation that will, beginning in the next decades, be flooded by rising sea levels…. There is simply not enough money to even think about doing all these things—and the fact we can’t even begin paying off our “national debt” is a constant reminder of that “reality.”

The mystery is, while all this perpetual haggling and hand-wringing is happening, no one seems to be knocking on America’s door asking to be repaid. Unlike Greece and Italy who are constantly being squeezed by the E.U. central bank and the IMF to repay their debts, no one seems to be squeezing the U.S. at all. Unlike Spain, which gets an earful from Germany if it even whispers about increasing its national borrowing, the U.S. hears nothing from anybody (except its own politicians and pundits) when it votes to raise the beanstalk one cap higher. How can that be? It’s almost as if—weirdly—there isn’t anyone out there expecting to get paid back.

Could that be true?

This puzzlement can, in fact, be explained. More important, the explaining—if you accept the explanation—will change your understanding of what the American economy is capable of accomplishing. And it’s exponentially more than you’d ever imagined.

The mystery lies in the use of the term “borrow.” As it’s commonly understood, when you borrow something, you take temporary possession of it from its owner (the lender)—and when you “repay” what you’ve borrowed, you give it back. What is often not considered in thinking about this transaction is that the lender’s possession is always replaced—either implicitly or explicitly—with a “promise” (i.e. the promise to return the possession, often with an additional premium to compensate the lender for his trouble.)

What is unique about U.S. government “borrowing”—and what gives the term, applied in that context, its confusing ambiguity—is the fact that the “promise” which replaces a borrowed dollar is simply another kind of “dollar.” Specifically, the government borrows a dollar from the economy, and replaces it with a “treasury bond or note” which is, in effect, a special form of “dollars” that earn interest. The treasury bond or note has the same liquidity/tradability in the economy as the regular dollars it has replaced; therefore, the amount of “money” in the private sector doesn’t fall by the amount taken out by the “borrowing” but remains the same as before the “borrowing” occurred.

In conventionally understood “borrowing,” when the borrowed thing is returned, the “promise” that was being held by the lender (either implicitly or explicitly) is simply cancelled. In U.S. government “borrowing,” however, the borrowed thing is NEVER returned because, by logic, the promise being held in its place is already the same thing as what was borrowed. E.g. a $1000 treasury bond is the same “thing” as 1000 dollars—only better, because it earns interest! When the treasury bond “matures,” the dollars it “contains” are simply converted to “regular” dollars or, more often than not, they are rolled into a new treasury bond.

This is why there is nobody squeezing the U.S. government to repay what the government has “borrowed.” They have already been repaid by the treasury bonds they took in exchange for the dollars they “loaned.” (As you can see, the term “loan” applied to this transaction has the same paradoxical ambiguity as the term “borrow.” What’s really happening is that one kind of money is simply being traded for another.)

The surprising result of this transaction is that when the government subsequently spends the “borrowed” dollars back into the economy, there is a net increase in the monetary assets in the private sector equal to the number of dollars “borrowed.” In effect, the treasury bond auction process creates “new” dollars that previously did not exist—dollars which the U.S. government now has possession of and authorization to spend. And that’s exactly what it does: it spends the new dollars to pay for things that Congress has determined will benefit American society.

The consequences of this explanation

First, the U.S. “national debt” is functionally not a debt at all. It is simply a tally of the U.S. treasury bonds which the government has issued and then traded for U.S. dollars which already existed in the private sector. These treasury bonds are in effect interest-paying, time-deposit savings accounts for the bond holders. You personally may have traded some of your retirement dollars for one of these “savings accounts” and you know, firsthand, they definitely contain real money! The “national debt,” then, is really a “national savings account.”

This is, to say the least, a startling and liberating perspective. It means all the political drama and hand-wringing about how we are going to repay our “national debt” can just go away. Even better, all the haggling can be replaced with an entirely different conversation: What shall our government spend the new dollars—created by the treasury bond auction process—to accomplish? The short list of deferred needs, recited earlier, could be a start.

The most extraordinary consequence, however, is that the explanation we’ve just outlined constructs an overarching view of the modern U.S. economy that has never been clear before:

The economy—that is to say, the creation and spending of dollars to undertake and accomplish humanly defined goals—is composed of not one, but two, money-creation processes. The first (and most commonly understood) process is the U.S. banking system: Banks “create” new dollars when they issue loans. This is the engine of American capitalism, and the new dollars sent into circulation by the banking system are specifically (and exclusively) targeted to accomplish goals associated with the generating of personal or corporate financial profits in the market economy.

The second money-creation process, as our explanation above has made clear, is the process we have been habitually calling “government borrowing.” The issuing and auctioning of U.S. treasury bonds, as we’ve just discovered, is not “borrowing” money at all, but creating it. Most important, the dollars generated by this process, which are then spent by the U.S. government, are not spent in the pursuit of personal or corporate financial profits. They are spent to pursue the collective goals—and address the collective needs—of society at large.

The problem we are struggling with today is that while we continue to encourage the first money-creating process—the banking system—to “create” as many dollars as American enterprise and consumers can profitably spend, we have habitually constrained the second money-creating process by labeling it our “national debt” and falsely believing it is encumbering us. In doing so, we severely—and unnecessarily—limit and constrain what we undertake to accomplish for the benefit of what could be called our collective “social economy.” This is a mistake we must now stop making.

Note: I am indebted to Thornton Parker for planting the seed of this essay and, of course, to Warren Mosler who was the first, I believe, to see and understand the true character of sovereign treasury securities.

40 responses to “The Explicable Mystery of the National Debt”