The Millennials’ Money is Published 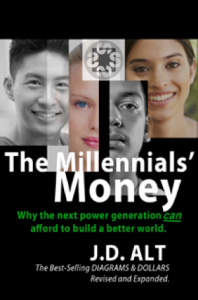 I’m pleased to announce the book The Millennials’ Money is now available. Many of its parts were first vetted here at NEP, and readers’ comments and suggestions were extremely helpful in finalizing the text. There is a nice endorsement on the back cover by Stephanie Kelton. A deeply felt thank you to NEP and all of its readers! The book is structured in three sections:

The introduction, “The Ideology of Money Scarcity—a Brief History,” is an overview of how, after 1971, the U.S. found itself using a modern fiat money system but continued thinking and behaving as if U.S. dollars, like gold, were a scarce commodity.

Part I: “Overcoming the Logic of Illogic” has two chapters.

Chapter 1, “Diagrams & Dollars,” is an expanded version of the illustrated essay of the same title that was first introduced here at NEP in early 2014. The diagrams make visible what modern fiat money is, and why it works the way it does.

Chapter 2, “The Beneficiaries of Falsehood,” explores the question of why, if the diagrams are correct, do we continue behaving as if they were not?

Part II: “Opportunities of a Millennium,” consists of five chapters. Each chapter explores a significant challenge faced by collective society which modern fiat money potentially transforms into a monumental opportunity.

Chapters 6 & 7: “Two Degrees Celsius” and “Wanahachi (a Raven’s Perspective)” explore—and attempt to dramatize—how modern fiat money is, really, the only hope there is for successfully mitigating global climate change.

To help promote the book (and associated architectural notions connected with MMT) I’ve created a new website: jdalt.com. The book’s webpage  includes a downloadable slide-show presentation of the Diagrams & Dollars chapter. At the suggestion of professor Trevor Dale at the Cardiff University in the U.K., this slide-show is licensed to the Creative Commons which enables anyone in the world to adapt and utilize the materials. Users are specifically encouraged to do translations/adaptations into other languages and money systems. (An adaptation for the U.K. has already been made by professor Dale.) The slide show will not be accused, at this stage, of being finely produced entertainment, but I believe it effectively communicates the basic ideas in a way that will hold most people’s attention. A narrated, video version of the slide-show is also in the works and will be made available on You Tube as soon as possible.

Again, thank you to the NEP community for supporting and helping with this effort. I hope that anyone who reads the book will  take the time to write a review for it on Amazon.

This entry was posted in J. D. Alt and tagged millennials. Bookmark the permalink.

3 responses to “The Millennials’ Money is Published”