Why are there no famous financial whistleblowers in this crisis?

This column discusses one of the more subtle issues raised by the Department of Justice’s (DOJ’s) civil fraud action against Bank of America (B of A).  The issue was so subtle that of the three articles about the lawsuit that I choose to review the night after the suit was filed, only the NYT article mentioned one of the most important aspects of the suit – the key role that the whistleblower played in making the action possible.  The AP and the WSJ articles ignored the fact.

The lawsuit threatens to impose steep fines on the bank. The Justice Department filed the case under the False Claims Act, which could provide for triple the damages suffered by Fannie and Freddie, a penalty that could reach more than $3 billion.

The act also provides an avenue for a Countrywide whistle-blower, Edward J. O’Donnell, to cash in. Under the act, the government can piggyback on accusations he filed in a lawsuit that was kept under seal until now.

This is the first major action relating to the frauds that caused the crisis that the government has brought that is based principally on a whistle-blowers’s revelations.  This is not simply worth mentioning, it is the most important aspect of the lawsuit.  Indeed, as one can see on the face of the complaint, DOJ is “intervening” in a civil action brought by O’Donnell under the False Claims Act because its investigation has confirmed that his claims are meritorious and DOJ wishes to take the lead in the litigation.

Here are some of the essential discussions that the whistle-blower’s disclosures and DOJ’s continuing refusal to investigate (criminally) and prosecute the elite frauds should prompt.

Full Spectrum Lending’s senior management was repeatedly warned that eliminating toll gates for quality control and fraud prevention, and expanding the authority of loan processors and compensating them based on volume without regard to quality, would yield disastrous results. For example, in January 2008, a pre-funding quality review showed an overall defect rate of 57%, and a defect rate of nearly 70% for stated income loans. Full Spectrum Lending senior management, however, made no changes to the Hustle, and instead restricted dissemination of the pre-funding review.

Paragraphs 67-71 are the centerpiece of the Complaint.  They show that O’Donnell played the key role in trying to prevent the fraud through these studies and warnings.  Bharara’s failure in the press conference to praise O’Donnell’s actions and ask others to come forward is revealing. 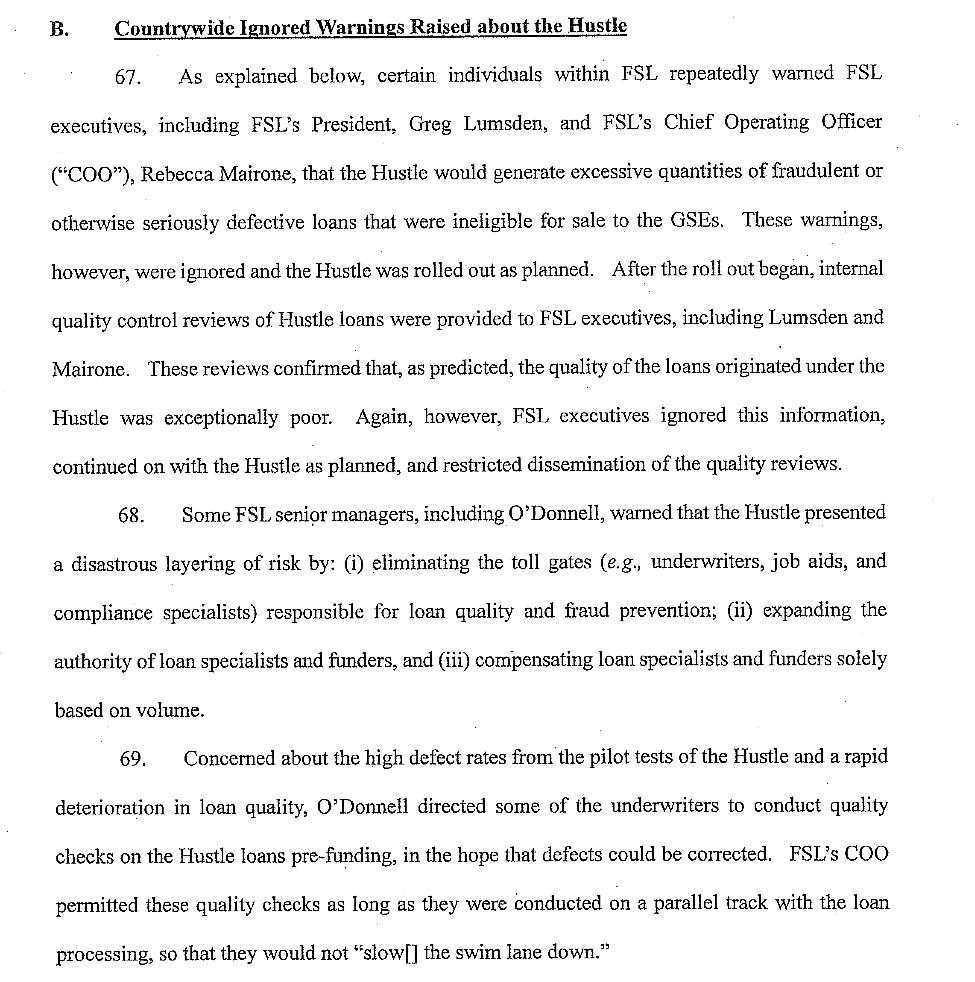 8. The NYT story presented O’Donnell in a dismissive and negative light that would be inappropriate for any straight news story and was bizarre given the strongly positive facts that the reporter would have learned about O’Donnell by reviewing the centerpiece of the Complaint.  Here again are the key passages.

The act also provides an avenue for a Countrywide whistle-blower, Edward J. O’Donnell, to cash in. Under the [False Claims] act, the government can piggyback on accusations he filed in a lawsuit that was kept under seal until now.

Not a positive word in the story even though the complaint details repeated positive actions by O’Donnell demonstrating competence, courage, and conscientiousness.  O’Donnell’s action in blowing the whistle may allow the U.S. to recover $3 billion from B of A’s brazen frauds. The NYT routinely uses the word “earned” to describe executive compensation even when the compensation was received for actions that enriched the officer at the expense of the bank.  When discussing an officer, who if the complaint is accurate is vastly more worthy of receiving exceptional compensation, a NYT news article chooses language implying that he was motivated by a desire to “cash in” and a hints that his “credibility” is at issue.  It’s a pretty nasty hatchet job and the only apparent basis for it is that O’Donnell is a whistle-blower.  (Full disclosure:  I’m a serial whistle-blower.)

What makes the immediate sliming of O’Donnell so revealing is that it was clearly instinctive.  The NYT piece had to be written extremely quickly and the author does not indicate that he tried to interview O’Donnell.  The U.S. public probably exhibits less hostility towards whistle-blowers than nearly all nations, but our instinctive reaction is still typically negative.  The finance community’s view of whistle-blowers is that Gitmo would be too good for them.  Financial reporters swim ceaselessly in this cesspool and hear endless complaints from financial elites (who are incapable of introspection and irony) that whistle-blowers are greedy and the scum of the earth.

We have far too few whistle-blowers and because of the worst epidemic of accounting control fraud in history and the death of criminal referrals by the banking regulatory agencies our need for whistle-blowers has never been greater.  Indeed, our federal prosecutors are the people who most desperately need to encourage whistle-blowers to come forward who worked at the financial control frauds.

Given that desperate need how would a rational administration respond?  The President and the Attorney General would hold a press conference with a group of whistle-blowers.  He would praise their performance, give a few specifics of how valuable the information they provided was to the nation, urge the tens of thousands of Americans who have information about other frauds to come forward, provide a web site for future whistle-blowers to use, and help arrange a publicity tour in which the select group of whistle-blowers appeared on a series of major television and radio programs where their efforts could be extolled and they could ask others to follow their lead.

The DOJ web site would extoll whistle-blowing and give examples of how their actions helped the nation.  It would showcase video interviews with whistle-blowers that could be picked up by You Tube.

The DOJ would hold rallies outside buildings that had (or do) house the worst frauds featuring the whistle-blowers who had come forward and asking others to follow their lead.  The President would host a White House dinner for the whistle-blowers and bestow a medal on some of the most praiseworthy.  That is what an administration devoted to holding the elite frauds accountable would do.

Instead, Presidents Bush and Obama and their Attorney Generals have ignored the whistle-blowers.  They have never urged Americans to come forward with information on the elite frauds who became wealthy by driving the crisis.  Bharara, in a PR piece he knew would be read by hundreds of reporters, did not thank O’Donnell and did not call upon Americans to come forward with information about the elite frauds.

The federal fraud task force, which has failed to indict any of the elite Wall Street frauds that drove the crisis, does have a web site where citizens could report elite frauds.  Here are the instructions and choices provided on the site:

Fraudulent activities should always be reported to your local law enforcement office. The following is additional information on how specific types of fraud complaints or cases of suspected fraud can be submitted to federal agencies.

I Want To Report: 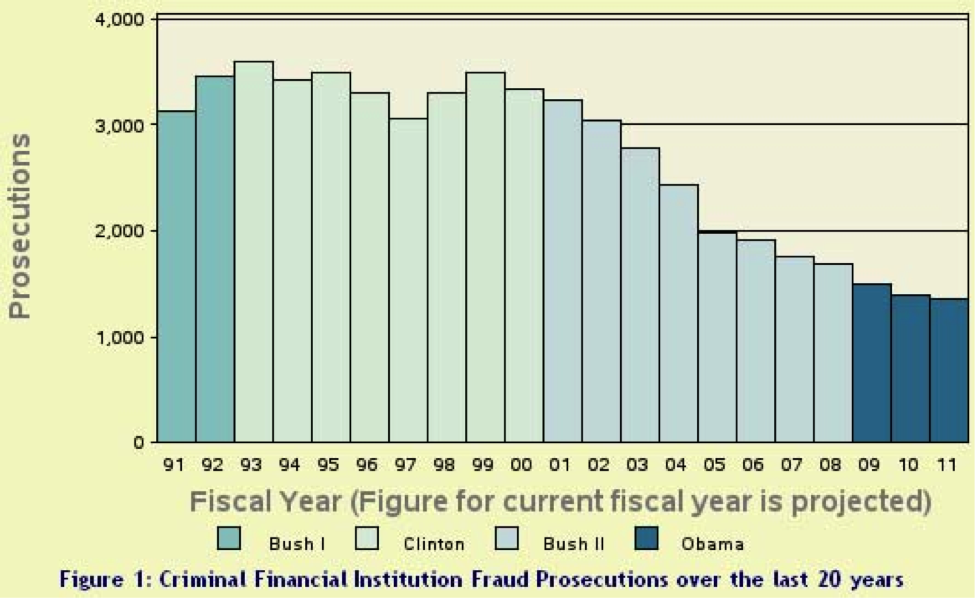 Conservative economists (and “law and economics” scholars) have long embraced Gary Becker’s claim that the key to dealing with crime is deterrence through increasing the likelihood and severity of criminal sanctions.  They should cite this chart.  If one dramatically reduces the risk of prosecution of the most elite financial frauds the result is likely to be an enormous increase in elite financial institution fraud and a catastrophic financial crisis.

We were told by Obama and Holder that they created the Task Force to reverse the disaster displayed in Figure 1.  So we can doubtless turn to the list on the Task Force’s web site where the public can report frauds for the category “Financial Institution Fraud.”  Except that there is no category.  Perhaps they feared that “Financial Institution Fraud” was too complex a term and might confuse potential whistle-blowers.  “Bank Fraud” would probably be their choice if the designers of the web site were worried about confusing the public – it is a short and clear phrase.  Except that there is no such category.  There is also no general category labeled “other.”  Whistle-blowers that wish to report fraudulent financial institutions need not bother to use the Task Force’s “report fraud” feature.  It’s almost as if FIF prosecutions were not a priority of the Obama administration.  A Great Recession and at least $12 trillion in losses apparently do not outweigh the lure of lobbying lucre.

The sad fact is that the toothless Task Force is an improvement over the Bush administration.  Attorney General Mukasey famously refused to create a task force to investigate the elite frauds that were driving the U.S. into the Great Recession, saying that mortgage fraud was the equivalent of “white-collar street crime.”

It is useless to report financial control frauds “to your local law enforcement office.”  Try this thought experiment:  you invent a time machine and travel back to Houston, Texas in 2000.  You call the Houston Police Department to warn them that something terrible is happening at Enron and beg them to treat it as an emergency and send in a team of detectives to tear apart their books.  You begin to tell the officer about Enron’s Special Purpose Vehicles (SPVs).  If you are lucky, they will refer you to the FBI.  The far more likely result is that they will decide you are crazy and hang up on you.  What they will not do is investigate Enron’s fraudulent accounting.

6 responses to “Why are there no famous financial whistleblowers in this crisis?”