Emergency Room Free for All: Why America’s Emergency Rooms Are Not the Key to Improved Health Care Access or Lowered Cost 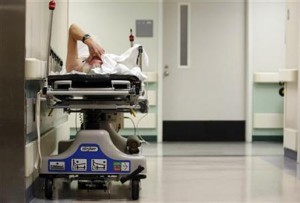 Mitt Romney has been going around telling newspaper editorial boards that the Affordable Care Act is redundant, that – to quote him in the Central Ohio Dispatch – “you go to the hospital, you get treated, you get care; and it’s paid for, either by charity, the government or by the hospital.”   (10/11/12 Ohio Dispatch)  Over the last few days, Paul Krugman and Nick Kristof have pointed out that limiting health care to emergency room visits already means that people die unnecessarily.   It’s just that when they are not the Harvard roommates of New York Times columnists no one except their families notices.

If it were as simple as showing up at emergency rooms designed to treat the indigent, Romney would be correct that we don’t need the Affordable Care Act to improve health care access.  But it isn’t as simple as that. Our multi-layered health care system is rarely as simple as that.  Claims of simplicity underestimate the intelligence of listeners and display a striking lack of familiarity with emergency medicine, as most Americans know it.

What really happens in the hospital emergency room is a triage procedure – as anyone who has sat waiting for five or six hours for a few stiches will tell you. America earns an “F” grade on urgent care provided after hours in non-hospital settings even for those with full insurance coverage.  So the single biggest users of emergency rooms are the insured who really could wait a few hours for care but really can’t wait until the next morning at 9:00 AM. And so the urgent but not emergent insured clog the emergency room. This is, of course, an amazingly expensive and inefficient way to treat this group.

Who else is there?  People with government-funded health insurance who lack consistent primary care services are there. This is the fallout from the roughly half of all American physicians who say they will not and cannot take any more Medicaid beneficiaries on as patients. Medicaid beneficiaries seek what ought to be out patient care from the one set of providers who cannot turn them away completely – the ED staff.  This is, of course, also an amazingly expensive and inefficient way to treat this group.

And, yes, the uninsured are there.  They, however, are not entitled to the full scope of services provided to the two other groups described above. It is a misunderstanding of  the scope and operation of EMTALA to pretend otherwise.  The EMTALA patients get treatment for active labor and stabilization and transfer for the rest.  This means, for a cardiac patient, no fast track to the heart catheterization lab but symptom relief and transfer.

Transfer to where?  Transfer to the county-funded hospital or safety net hospital for the catchment area.  Here’s the thing: those folks are overwhelmed by incoming transfers of these kinds of people.  And they are sinking under the burden.  Those transferred may not die on the way, but they do not get the care that gives them the best hope of beating cancer or avoiding another preventable emergency room visit. And if the first visit does not produce the right diagnosis, additional tests and follow-up do not necessarily occur.  If they do, if the patients receive quality care, both they and the unit that provides will face huge bills that neither can really afford.

It is therefore no accident that emergency departments are a vanishing breed.  From 1990 to 2007, twenty seven percent of emergency rooms in the United States closed. It is not uncommon to travel around major metropolitan areas and note repeated hospital signs with the admonition: “No Emergency Services On Site.”

America’s emergency rooms are in crisis.  A vision of our future that loads even more uncompensated care on safety net facilities is a nightmare vision. But Mitt Romney knows this.  One of the chief goals of state specific health care reform in Massachusetts was to lower emergency room use significantly.  It is an explicit measure of success or failure built into Romney-care itself.

Now the rest of the country needs to know what Romney-care knows.

One response to “Emergency Room Free for All: Why America’s Emergency Rooms Are Not the Key to Improved Health Care Access or Lowered Cost”