Posted on October 7, 2011 by admin | Comments Off on This seems especially appropriate right now…

Comments Off on This seems especially appropriate right now…

First, let me join with New York Attorney General Schneiderman in congratulating you for your decision to withdraw from the mortgage foreclosure settlement. Two of the states with the largest number of victims have decided that the proposed settlement is inadequate and dangerous because of the scope of the releases. Your explanation for your decision in your letter to Attorney General Miller was concise, polite, and persuasive. Attorney General Miller deserves credit for his efforts – four years ago – to warn the Federal Reserve about endemic mortgage fraud by nonprime lenders. I quote key passages from his warnings below.

END_OF_DOCUMENT_TOKEN_TO_BE_REPLACED 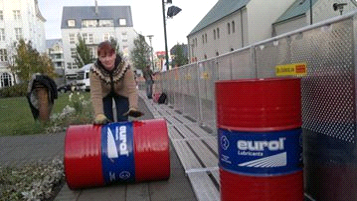 Comments Off on Don’t Let Him Get Away With It

Below are some of the wildest, boldest, and most surprising stories we ran across this week. Thanks to all who shared their favorites. Keep them coming! This is a weekly series, so we’ll be back with more next Friday.

We’ve seen quite a fewvideos featuring Occupy Wall Street protestors but none this good.

The Wall Street Journal reports that the European Union (EU) finance ministers are discussing whether governments with the strongest public finances can provide some budget stimulus to help support flagging economic growth in the 27-nation bloc.

Could it signal a small reversal of a policy adopted by ministers in October 2009 that calls on all EU countries to start cutting their deficits in 2011? We sure hope so.

Watch this one if you’ve got 47 seconds and you want to spend them smiling.

Last weekend, Denmark became the first country to adopt a “fat tax” (story here). The tax hits all foods with a saturated fat content above 2.3 percent. And while there is scant evidence that a tax of this sort will lead to changed behaviors and improved health outcomes, researchers are worried that a the tax would be quite regressive, hitting lower-income families much harder than higher earners.

The New York Times reports that “Britain is beginning to taste the bitter medicine David Cameron warned was necessary to fix its wounded economy . . . Figures released last month showed growth in Britain had slowed to 0.2 percent in the second quarter, diminishing hopes that the country’s businesses can generate new jobs to replace public sector posts being lost under the austerity plan. In the last year about 250,000 public sector workers have been laid off, and the country’s jobless rate was 7.9 percent in the period between May and July. It’s left some wondering: Is the remedy worse than the symptoms?” What a shame. Britain had the good sense to stay out of the Euro, but it’s behaving like a member of the cash-strapped system. If the Brits understood their monetary system, they’d realize that their wounded economy could be fixed with a few good keystrokes.

New York City Mayor Michael Bloomberg can’t understand why protestors are so upset about the divide between the haves and the have-nots. After all, he says, Wall Street salaries are only about $40 to $50,0000 a year. Except that they’re not. Sure there are some average folks working in the back-offices, answering phones and filing paperwork, but this isn’t what’s got people napping against barricades in NYC. So what do Wall Street workers really make? (Story here) “In 2010, the average cash bonus in New York City’s securities industry was $128,530 per person, according to the state comptroller’s office. That figure doesn’t include salaries, pay tied to stock options and some kinds of deferred compensation. At the Envy of Wall Street, Goldman Sachs, the firm in the second quarter set aside $90,140 per employee for compensation and benefits.”

Mocking the Occupy Wall Street protestors, some Chicago traders hung signs in their office windows, declaring themselves the 1%.