What Caused The Budget Deficit? Not What You Think!

Despite all the conservative uproar against Obama’s stimulus plan, the largest portion of the increase in the deficit has come from automatic stabilizers and not from discretionary spending. This is easily observable in the graph below which shows the rate of growth of tax revenues (automatic), government consumption expenditures (somewhat discretionary) and transfer payments (again automatic) relative to the same quarter of the previous year: 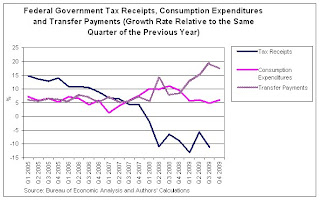 In 2005 tax revenues were humming, with a growth rate of 15% per year—far above GDP growth–hence, reducing nongovernment sector income—and above growth of government spending, which was just above 5%. As shown in the figure above, such fiscal tightening invariably results in a downturn. When it came, the budget deficits increased, mostly automatically. While government consumption expenditures have remained relatively stable over the downturn (after a short spike in 2007-2008), the rate of growth of tax revenues has dropped sharply from a 5 % growth rate to a 10 % negative growth rate over just three quarters (from Q 4 of 2007 to Q 2 of 2008), reaching another low of -15% in Q1 of 2009. Transfer payments have been growing at an average rate of 10% since 2007. Decreasing taxes coupled with increased transfer payments have automatically pushed the budget into a larger deficit, notwithstanding the flat consumption expenditures. These automatic stabilizers and not the bailouts or much-belated and smaller-than-needed stimulus are the reason why the economy hasn’t been in a freefall á la the Great Depression. As the economy slowed down, the budget automatically went into a deficit putting a floor on aggregate demand.
As estimated by the New York Times, even if we were to eliminate welfare payments, Medicaid, Medicare, military spending, earmarks, social security payments, and all programs except for entitlements, and in addition stopped the stimulus injections, shut down the education department, got rid of a number of other things and doubled corporate taxes on top of all of this, the budget deficit would still be over 400 billion. This further demonstrates the non-discretionary nature of the budget deficit. And of course this doesn’t take into consideration how much more tax revenues would fall and transfer payments would rise if these cuts were to be undertaken. With the current automatic stabilizers in place, the budget cannot be balanced, and attempts to do so will only cause damage to the real economy as incomes and employment fall.
Even some deficit terrorists have come around. In a recent article in the Politico, DAVID M. WALKER (co-authored with LAWRENCE MISHEL), the president of the Peter Peterson Institute admits that right now it is important to address the jobs issue, rather than worry about the deficits. Moreover, creating more jobs will help boost the economic recovery and at the same time solve the budget problem. He has finally looked at the data and seen that much of the increased budget deficit is due to the automatic stabilizers, rather than profligate deficit spending:

“As in every economic downturn, federal revenues have fallen steeply because individuals and corporations earn less in a recession. High unemployment also results in higher expenditures for safety net programs, like Medicaid, unemployment benefits and food stamps.”

3 responses to “What Caused The Budget Deficit? Not What You Think!”