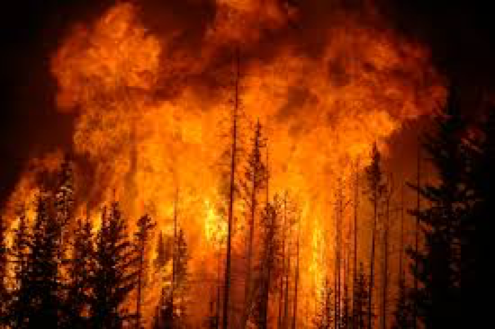 To date, virtually nothing concrete has been done, or even started. The reason is because—to date—we insist on imagining that the “money” needed to pay for serious planning, and to begin real actions, must come, directly or indirectly, from tax-payer’s pockets. Virtually by definition, this means the “money” is not available—nor, we should admit, will it ever be. Therefore, since we insist on believing that is where the money must come from, we cannot even begin. There are a multitude of scientists and informed advocates who are now sounding alarm bells about what’s coming down the road, but not a single one of them, unfortunately, can tell an audience how their local, state, or national governments are going to pay for the actions that need to be planned and implemented. Until that changes, we are like the proverbial deer frozen in the headlights of an on-coming tractor-trailer.

Fortunately, history has shown us how to get unfrozen. History has shown us that, when necessary, we can easily imagine a money-reality different than what we habitually insist is true: that money can be newly “created” to buy whatever is needed—labor, materiel, human ingenuity—to undertake and accomplish something we all recognize needs to be done for our collective benefit. Whether we “see” this alternative money-reality simply depends, apparently, on how big the fire is.

The history lesson I’m specifically referring to is America’s mobilization out of the Great Depression and into World War II. As documented in the books American Default, by Sebastian Edwards, and A Call to Arms, by Maury Klein, in 1933 America was facing its own frozen-in-the-headlights-how-can-we-pay-for-it predicament: The economy then had essentially collapsed into the Great Depression. The banking system was in a death-spiral as panicking families and businesses were withdrawing their deposits for cash dollars—then redeeming their cash for the gold the dollars promised, forcing the banks into insolvency. Family savings had been wiped out, farmers had abandoned their land, businesses had closed their doors, a fourth of the working population lost their jobs, breadlines formed in every major city.

At the same time, wild-fires of armed fascism were destabilizing Europe and southeast Asia. Hitler gained dictatorial control of Germany and soon began mobilizing and arming the war machine of the Third Reich. Paralyzed by its myopic political insistence on maintaining the “sound-money” (gold backed) foundations of the U.S. monetary system—even though it had rendered the system itself virtually useless—America was ill-prepared, either to climb out of the Depression or defend itself against the growing conflagrations of fascism.

Half the U.S. army in 1933 could be seated in Chicago’s Soldier Field stadium—with the other half standing at attention on the football field. The U.S. Navy consisted of a few hundred left-over World War I rust-heaps, mostly in mothballs. As Germany’s Luftwaffe began demonstrating its newly minted warplanes, the U.S. Airforce did not even exist. Nor did the dollars that would be necessary build it: Where could the dollars possibly come from when America’s families had lost their savings, when America’s businesses had closed their doors, when America’s banks had declared insolvency? Sell War Bonds? Who had the dollars to buy them? Declare an income tax? Who had the income to pay it?

The American mobilization—and the transformation of the understanding of money—began with the election of Franklin Roosevelt. Almost immediately, the federal government began to spend money (no one thought existed) to pay American citizens to undertake and accomplish what needed to be done. Here is a brief, but astonishing, list (annotated from the website The Living New Deal) of the concrete actions that were paid for in U.S. dollars during the first 12 months of Roosevelt’s presidency:

March 4, 1933: Franklin Roosevelt is sworn in as President.

March 31, 1933: The Civilian Conservation Corps (CCC) is created by the Emergency Conservation Work Act, putting unemployed young men to work in the nation’s forests and parks.

June 16, 1933: President Roosevelt creates the Federal Emergency Administration of Public Works, which eventually becomes known as the Public Works Administration (PWA). During the next 10 years the PWA contributes billions of dollars towards tens of thousands of infrastructure projects all across the nation.

June 16, 1933: With Executive Order No. 6174, President Roosevelt authorizes up to $238 million in Public Works Administration (PWA) funds for the Navy. From these funds, 32 naval vessels are built.

October 23, 1933: The Army Corps of Engineers begins the construction of the Fort Peck Dam, one of the many large Corps projects made possible with New Deal funding.

November 9, 1933: The Civil Works Administration (CWA) is created with Executive Order No. 6420B, under the power granted to President Roosevelt by the National Industrial Recovery Act. By January 1934, over 4 million formerly-jobless Americans are employed by the CWA. to build 44,000 miles of new roads, install 1,000 miles of new water mains, construct or improve 4,000 schools, and much more.

December 8, 1933: The Public Works of Art Project (PWAP) is created by an allocation of funds from the Civil Works Administration. Unemployed artists are hired to create works of art for public buildings and parks. They will create nearly 16,000 works of art.

Where did the dollars come from to make all this happen? Were they tax-dollars collected from the American people? Were they dollars borrowed from the banking industry and titans of finance? No. They were dollars issued by the sovereign government out of thin air—fiat dollars. As described by Roosevelt’s Secretary of the Treasury, William H. Woodin, the new dollars were “money that looked like money.” And so, as demonstrated by what the spending of it accomplished, it was money. (What Woodin meant by this was that the “Federal Reserve Bank Notes” which the central bank was authorized to issue—as needed—by the Emergency Banking Act of 1933 looked exactly like the old “Federal Reserve Notes” they replaced, except for one tiny detail: they could not be redeemed for gold.)

This course of action, of course, was vehemently opposed by certain interests and forces outraged at the idea of having to trade their gold for fiat currency. They did everything in their power to shut down Roosevelt’s presidency and his gradual and experimental shifts toward a fiat money system. From the perspective of the financial titans—who were, in one form or another, creditors—being repaid in gold was the only thing of importance. The country be damned. Roosevelt called them out in a speech a few days before he was elected, in a landslide, to his second term as President:

“We had to struggle with the old enemies of peace – business and financial monopoly, speculation, reckless banking, class antagonism, sectionalism, war profiteering. They had begun to consider the Government of the United States as a mere appendage to their own affairs. And we know now that Government by organized money is just as dangerous as Government by organized mob. Never before in all our history have these forces been so united against one candidate as they stand today. They are unanimous in their hate for me, and I welcome their hatred.”

By 1941, fiat money—and all the things it had paid American’s to accomplish—had begun to pull the country out of the abyss. And just in time. For it turned out the New Deal had only been a warm-up exercise in the creative use of sovereign money to accomplish collective goals. Europe was in the flames of war. Germany was threatening England from a French country-side it had already invaded and occupied—and was stalking American shipping off the U.S. Eastern seaboard with its submarine “wolf-packs.” Then December 7th happened.

Over the next four years, miraculously, America built—and paid for with fiat money—the largest and most technologically advanced war machine that had ever existed on Earth. The scale of the spending was staggering. The most astonishing thing is what the unprecedented spending accomplished in the long run: It transformed an entire society to confront a new reality and created, for all practical purposes, a new “America” to thrive in that reality.

The American people had “paid themselves”—through the fiat monetary actions of their sovereign government—to invent an array of new technologies and apparatuses originally conceived for waging war, but which, after the war, were clearly seen to have useful applications to peaceful life as well—and they had paid themselves to build a great many factories, research and production facilities capable of adapting and producing these useful things to civilian life—and they had paid themselves to train a very large workforce of engineers, technicians and skilled workers who knew how to make it all work. This was a powerful economic brew—and it was spiced by the fact that the returning G.I.s were getting paid to go to college to explore how to make the whole thing run even better. America never looked back. Until now.

We could ask what happened. We could ask why, today, we cannot marshal enough resources to rebuild the Puerto Rican electric grid and the Virgin Islands hurricane devastation. We could ask why there isn’t a national engineering effort to begin planning for sea-level rise. We could ask why the U.S. forestry service doesn’t have the budget it needs to pay American workers to clear deadfalls and underbrush from its most vulnerable tree-stands. Or why we cannot imagine deploying a fleet of tanker planes to California large enough to deluge any wild-fire before it has a chance to become a conflagration.

The only question we really need to ask, though, is this: How big does the fire need to be before we “understand,” once again, how we can pay ourselves to put it out?

13 responses to “How big does the fire need to be?”