S&P hosted a conference call on Monday morning to explain its downgrade of Brazil’s credit rating (you can view the video webcast replay here). During the conference call I had the opportunity to ask a couple of questions.  My first question, to S&P analyst Lisa Schineller, at around the 41:53 minute mark, was the following:

Question: “Are there solvency risks associated with Brazil’s local currency debt? Brazil issues its own currency.”

[Lisa Schineller]: “We would not say there are solvency risks, we rate, for both local currency and foreign currency, our ratings are continuum. Yes, we lowered both ratings, we are by no means thinking about a solvency issue here and risks there. There is less policy flexibility at hand, these ratings for the local currency BBB- is still in the investment grade category and the foreign currency is at the high end of the speculative grade category. I think this is an important point to highlight. There is this increase in the stress in the economy, in the policy execution, but it is very different than talking a solvency issue.”

That is, as the S&P analyst confirmed, there are no solvency risks. In its sovereign ratings methodology S&P looks at “sovereign government’s willingness and ability to service its debt on time and in full.” Standard & Poor’s sovereign rating is:

As I explained in my previous posts (see here and here), there is no credit risk in obligations denominated in the domestic currency, that is, the risk of payments not being made on government debt denominated in Reais is zero. Why? Because Brazil’s local currency debt outstanding promise to pay Reais and the federal government is the monopoly issuer of currency (Rezende 2009).

My second question to Lisa Schineller, at around the 52:05 minute mark, was the following:

[Lisa Schineller]: “First, if we look at international reserves, we view international reserves as a resource available for the economy as a whole, it is not that those international reserves are there just to pay government debt. They are there to pay the debt of the public and the private sector, which is as we calculated, including the dynamic of non resident holdings [of local currency government debt], over US$ 400 billion. So, Brazil is not a net creditor and moreover it has a significant external liability, which is that much greater because some of its government debt is not debt in those formal numbers, either. And the ratings are criteria for foreign currency takes into account political, institutional government effectiveness, the economic story, which is now a comparative weakness, external which is somewhat neutral, fiscal, and monetary. And it is the combination of all these factors, the ability to execute policy and to strengthen the growth prospects, that is, all of these factors is what from our criteria determines the foreign currency rating. And we see a lesser ability, to manage today in the face of external shocks, than we do before. And the rating, again, a continuum, somewhat lower.”

This is interesting. The analyst said that international reserves are funds to pay the debt of the public AND the private sector. Really? Is she implying a bailout of private external debt? In my previous post, I showed that there was a sharp increase in private external debt issuance since Brazil’s upgrade to investment grade status (figure 1) and that there are significant risks associated with them when external conditions change. 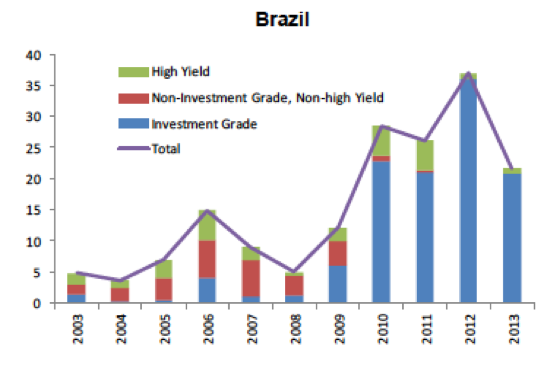 Brazil has seen large increases in private foreign currency-denominated debt, in particular for non-financial corporates and banks. This increase in external private debt has increased external financial fragility and exposed the private sector to refinancing risk and to increases in debt servicing costs. This is an important source of financial fragility, which can have potential impacts on economic activity. But, is she implying that the Brazilian government ought to give financial assistance to failing private businesses that cannot meet their obligations denominated in foreign currency debt? Brazil is a sovereign government. Contrary to the analyst view, international reserves are assets owned by the government. She should take a quick look a Brazil’s central bank (BCB) balance sheet to realize that international reserves are assets that the Brazilian government holds, mainly in the form of bonds issued by foreign governments (BCB’s discloses in its financial statements the allocation of international reserves, which includes items such as 4 – cash and cash equivalents in foreign currencies, 5.1. deposits in foreign currencies, 6 – funds under external management, 9.1. in foreign currencies, 12 – gold).

So, the question should be: Is the federal government able to service its foreign currency debt on time and in full? The answer is yes. Why? Let us look at two alternative ways to measure the government external debt outstanding: one is a narrow view of the government including the federal, state and municipal governments and the other takes into account the narrow view plus quasi-sovereign debt, that is, external debt issued by state-owned financial institutions and enterprises including Brazil’s national development bank (BNDES), state-owned banks- Banco do Brasil (BB) and Caixa Econômica Federal (CAIXA), and Petrobras (table 1). 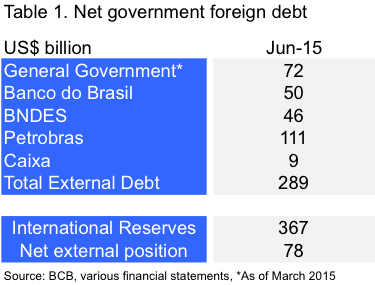 External debt is a liability of a resident unit held by nonresidents, irrespective of the place of trading, the jurisdiction, or the currency in which the debt is denominated. So, even liabilities in national currency, issued in Brazil, must be part of the external debt.

Thus, the quarterly external debt statistics published by the BCB will encompass the outstanding fixed income securities issued in the domestic market and held by nonresidents, in particular the corresponding share of the locally issued Domestic Federal Public Debt (DFPD). (BCB 2015)

However, the Brazil’s central bank highlight that this is “only a methodological reclassification”. It notes that

The inclusion of these securities traded in the domestic market and denominated in Brazilian reais in the external debt does not affect the country’s outstanding external liabilities. (BCB 2015)

It goes on to say that

It is essential to emphasize that the external debt denominated and settled in local currency, of course, does not imply the same level of risk than that arranged in foreign currency. In the first case, the exchange risk is borne solely by the nonresident investor and lender. Additionally, to serve this debt, revenues in foreign currency are not necessary. (BCB 2015)

So, regarding the non-resident share in domestic federal public debt there is no solvency risk because the federal government is able to service its debt denominated in Reais on time and in full. Thus, there is no credit risk. As the S&P analyst confirmed there is no solvency issue. But S&P seems to be concerned with other risks such as exposure to foreign exchange risk by non-resident investments. That is, they are concerned that foreign exchange depreciation will generate carry trade losses for foreign investors.

For instance, in a carry trade, an investor borrows funds (in U.S. dollars or other hard currencies) at a low interest rate to invest in high yield local currency assets (such as purchases of Brazilian bonds). Note that if the R$/US$ foreign exchange appreciates then investors earn the interest rate differential plus capital gains due to exchange rate appreciation. However, if the R$/US$ foreign exchange depreciates, then this strategy generate losses due to exchange rate depreciation, which can more than offset interest rate differentials and produce net losses for investors. This strategy carries its risks so investors decide whether they want to bear those risks. Though the carry trade strategy has generated big profits for investors in the past, it has also produced losses. Figure 2 shows carry trade total returns for different current pairs including the Brazilian real (BRL). The massive depreciation of the Brazilian real against the US dollar (figure 3), in particular in 2015, triggered carry trade losses. However, the Brazilian government cannot be held responsible for them. 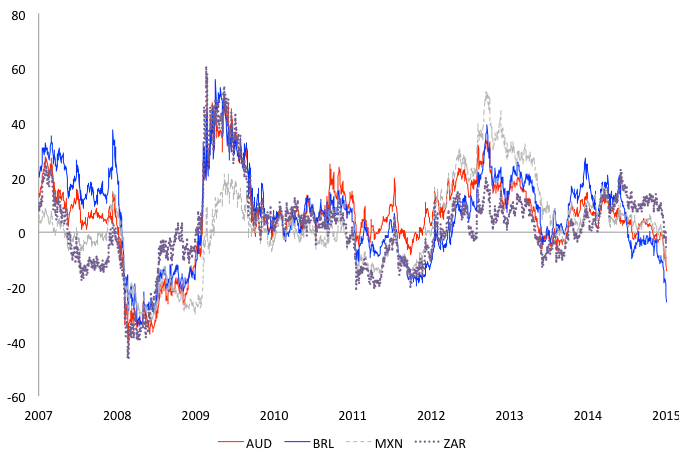 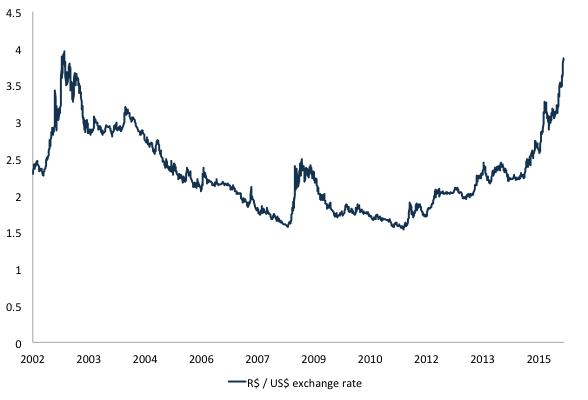 To sum up, contrary to S&P’s analyst view, Brazil is a net external creditor. Can it make payments on and in full on foreign currency sovereign debt? The answer is yes. Moreover, Brazil cannot become insolvent on its own currency. Taxpayers (currency users) pay their taxes using the currency issued by the federal government (currency issuer). Because the government is the monopoly issuer of currency, it must spend first (by issuing its IOUs) so currency users can pay their taxes. Government bonds — interest-bearing IOUs — are issued to remove excess reserves so Brazil’s central bank can hit its positive overnight interest rate target. It is an interest rate maintenance operation rather than a borrowing operation (for further details see Rezende 2009). For a sovereign government that issues its own nonconvertible currency, the overnight interest rate target is a policy choice. The interest rate target set by the BCB is a policy variable. However, this policy choice has significant impacts on the composition of Brazil’s fiscal deficits, which in the Brazilian case, most of its fiscal deficit is due to interest payments — 6% of GDP on interest payments in 2014.

As I argued in a previous post, Brazil’s positive economic performance prior to the economic crisis of 2007-2008 led to a unique economic environment conducive to Brazilian economic expansion and improvement in economic conditions for the majority of people. However, Brazil’s policy response to the crisis and the impacts of bursting bubble conditions that prevailed prior to the crisis that benefited emerging market economies have exposed the inherent contradictions of Rousseff’s policies, that is, an attempt to reclaim the pre-crisis progress and adherence to the mythology of neoliberal ideology that reasserted itself as soon as external economic conditions changed.

The economic debate of the previous election cycle in Brazil caused the Rousseff administration’s economic policy to drift in a conservative neoliberal direction. The idea that Brazil faces a fiscal crisis and that austerity measures will pave the way for economic growth is incorrect. Brazil needs to frame the debate within the progressive space. Brazil is the monopoly issuer of currency, it can make all payments denominated in the state unit of account as they come due, that is, solvency is not an issue. As I have argued elsewhere, following fiscal rules blindly without determining the impacts on the private sector balance can be dangerous to growth and stability. Current policy is being built on a foundation of fantasy, based on myths that prevent us from adopting reasonable policies such as promoting an effective policy to achieve and maintain full employment and price stability.

6 responses to “Reactions to S&P Downgrade: S&P analyst confirms there is no solvency issue”