The Answer to the Unemployment Problem Is More Jobs

Dean Baker, everyone’s favorite progressive economist (mine, too), has an interesting take on our unemployment problem.

The idea is that if all the employed work less, employers will need to hire the unemployed to produce what the already employed won’t be producing while sunning themselves on Florida’s beaches.

Look, I’m all for shorter work weeks. It is ridiculous that labor’s push somehow got stuck a century ago at the 40 hour work week in the USA. Employed Americans work more hours per year than just about any other workforce on the planet. 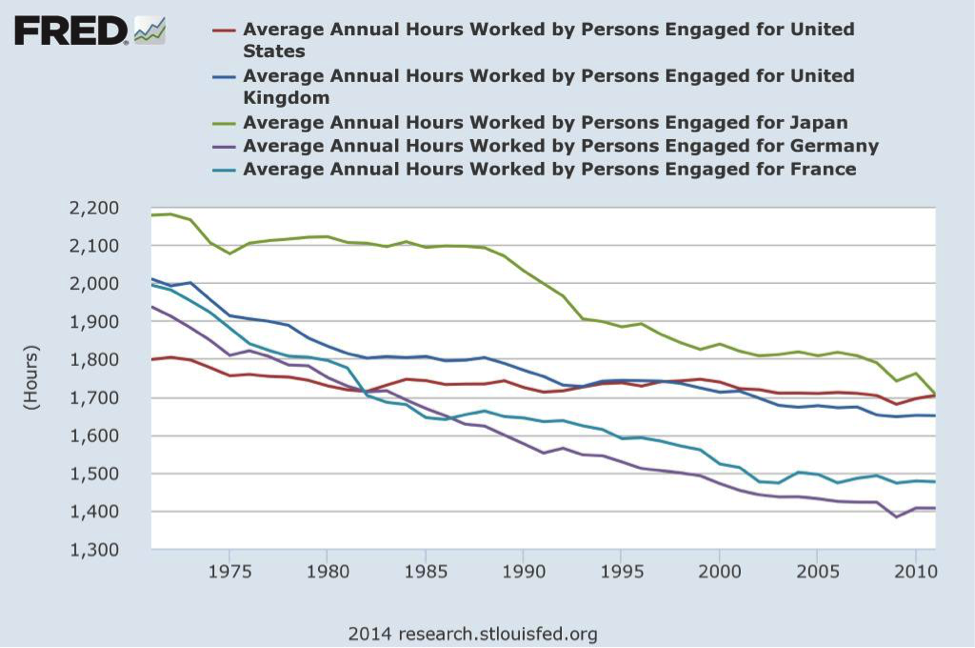 But, as Joan Robinson once declared, the only thing worse than working as a wage slave is to be unemployed. Just ask the Italians, who now have the highest unemployment rate since they started keeping records. Thanks to the EMU and German fiscal rectitude!

I see shorter work days and more paid vacations as a progressive goal to humanize the work place. More time to enjoy one’s family, recreation, and the arts. More time for self-improvement and community involvement. More time for our wage slaves to enjoy the life of leisure long pursued by the leisure classes.

However, last on my list of arguments for a shorter work week would be the claim that it will create more jobs for the unemployed.

As my colleague Pavlina Tcherneva points out, for every social problem except unemployment, progressives advocate a direct solution.

How do you solve the problem of lack of access to healthcare? The progressive advocates single payer.

(Not, of course, Obamacare, which is just a scheme to turn more of your income over to Wall Street’s insurance industry.)

More vacations. Pay the employed not to work.

Unemployment compensation. Pay the unemployed not to work.

Or, more ludicrously, BIG (basic income guarantee). Pay everyone not to work.

What is missing? Jobs. The unemployed want jobs. But progressives will not give them jobs.

Progressives offer hand-outs to the unemployed. Or paid vacations to the employed. Or BIG to everyone!

But no jobs for the unemployed.

Why not? Progressives offer up a variety of excuses. The most common argument against creating jobs for everyone who wants to work is that this is not politically feasible in the USA.

Why? Oh, it would cost too much. Estimates put the cost of a job guarantee with a living wage at 1% to 3% of GDP. Progressives argue you’d never get that much spending through Congress.

Of course, the federal government alone already spends about 3.4% of GDP on anti-poverty programs—mostly to deal with poverty that is in large measure caused by unemployment, involuntary part-time unemployment, and poverty-level wages paid by the nation’s undertakers like Wal-Mart. 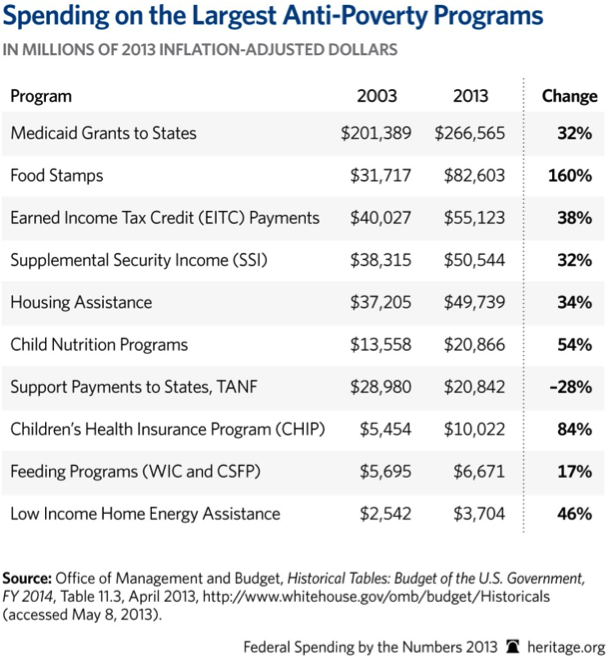 Of course, that 3.4% does not eliminate poverty; indeed it barely even scratches the surface. As we’ve ramped up social spending, the only group that has seen a significant reduction of poverty rates is the nation’s seniors—thanks to Social Security.

I do not begrudge our seniors their Social Security. Reduction of poverty among our aged is a shining achievement of Roosevelt’s New Deal.

But we’ve failed all other groups—most notably Americans of working age and their children. 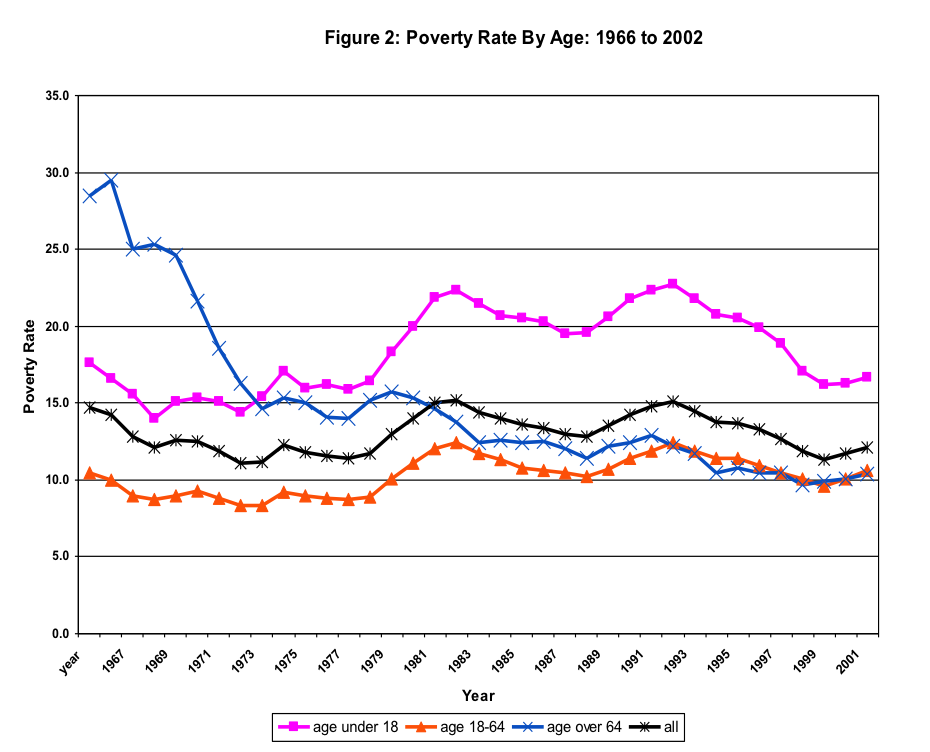 Why? Because we are too afraid to push for jobs-for-all.

Instead, our progressives dismiss job creation and push instead for the supposedly more politically palatable paid vacations, unemployment compensation, and BIG.

Call me crazy, but I think that Americans are far more likely to line up behind paying people to work, than behind a scheme to pay people for more vacations.

Especially if a job at a living wage would eliminate the need for most social spending plus huge subsidies and tax breaks already paid to businesses–trying to coax them to create a job or two.

In one stroke, a job guarantee at a living wage not only eliminates the need for most anti-poverty spending, but it also ensures private sector jobs will pay decent wages. And it eliminates the myriad of public policies that impoverish our local governments as they give tax breaks and subsidies trying to bribe corporations to relocate their factories and warehouses.

Baker points to Germany as an example of the successful use of work-sharing to prevent unemployment from rising. The government pushes firms to reduce hours worked by employees, and then makes up lost wages by essentially using funds that would have gone to pay unemployment benefits. As a result, Germany’s unemployment rate is only 5%–obviously very much lower than the average rate across all of its EMU neighbors.

Nice story, but Baker ignores the real reason for Germany’s success. Germany has pursued the most ruthless “beggar thy neighbor” policy the world has ever seen. It has held its own wages constant since unification, destroying industrial production throughout the rest of the EMU. In other words, Germany simply exported all of its unemployment.

So America is supposed to follow that strategy? To whom should we export our unemployment? Mexico? Canada? This will be much harder since they have not joined a US Dollar Union. Germany’s advantage is that its neighbors cannot depreciate their currencies since they’ve adopted the same Euro.

I’ve noticed that in many of his pieces, Baker mentions dollar depreciation as a possible solution to America’s unemployment problems. The idea is that if the dollar fell against the Euro and the Chinese RMB, we could capture some of the prized manufacturing jobs.

I was recently at a conference in Europe where an economist from a highly respected US progressive think tank made exactly that argument. I decided to play along with her. OK, I asked, how many factory jobs do you think we could bring back from China if the RMB appreciated significantly?

“Yes but there will be a multiplier—the 3 million factory jobs will create demand for output of other sectors.”

Right, I said; so let us say the effect is double—we get 6 million jobs total. That leaves us 19 million short—give or take some millions. What about the rest?

I decided this was a chance to talk about a job guarantee…. What about providing a job for everyone who wants to work, at decent pay?

“That’s a nonstarter. With the Republican Congress coming in, you’ll never get that through.”

OK, wait a minute. So you are arguing that we have a better chance of getting the Chinese to appreciate their currency in order to destroy their own manufacturing sector to the benefit of American jobs?

Such is the sorry state of American progressives. They dismiss the political feasibility of the obvious in favor of supporting second- or third-best solutions with zero chance of success.

To be sure, I am not claiming that a job guarantee is an easy sale. It is hard. It is damned hard.

But it is far more consistent with American values. As readers know, I’m a big fan of George Lakoff.

As Lakoff says, “Cognitive scientists study how people really think – how brains work, how we get ideas out of neurons, how framing and metaphorical thought work, the link between language and thought, and so on. But other academic fields have not been using these results, especially, political science, public policy, law, economics, in short, the main areas studied by progressives who go into politics. As a result, they teach an inadequate view of reason and “rationality.” They miss the fact that our brains are structured by hundreds of conceptual metaphors and frames early in life, that we can only understand what our brains allow, and that conservatives and progressives have acquired different brain circuitry with the consequence that their normal modes of reason are different. What progressives call “rational arguments” are not normal modes of real reason. What counts as a “rational argument” is not the same for progressives and conservatives.”

More paid vacations as a solution to our unemployment problem might seem “rational” to a progressive, but it violates “normal modes of reason”. How is taking more paid vacations contributing to our community? Why should government pay for your extra vacations?

Why won’t the unemployed go out and get their own jobs, rather than forcing me to share mine? How do I know my employer won’t just make me do 40 hours of work in 25 hours? What if Congress reneges on the promise to make up my lost pay? And what if my employer likes you more than me, so that I get sacked and you get my full-time job?

So here’s my puzzlement. Why won’t progressives try to help develop the moral framing to support jobs-for-all? At decent wages.

There is no better anti-poverty program than jobs for those who want to work. Offering a job is a hand-up not a hand-out. Working promotes community. It allows for shared prosperity. We all benefit when everyone works. It is consistent with American values.

We have a half-century of experience with hand-outs instead of hand-ups. Hand-outs have not reduced poverty. If anything, poverty is worse. Inequality is worse. Joblessness is worse.

Putting our nation’s fate in the hands of Chinese politicians is not an answer, either. Truthfully, I do not believe the manufacturing jobs will come back to the US, no matter how high the RMB goes. China is losing millions of manufacturing jobs, too. There will always be a lower cost producer. And it won’t be the USA. In any event, robots take away more jobs than Chinese ever will.

“Not everyone functions with just one worldview in every aspect of life. Many, if not most, people are primarily either strict or nurturant, but partly the other in some areas of life. I call them bi-conceptuals, since they have in their brains both worldviews – each inhibiting the other – and applying those worldviews to different ranges of issues. With respect to political issues, those who are mostly one, but partly the other, are called “moderates.” But there is no one shared moral or political ideology of the moderate. Moderates differ on what they are moderate about and what their primary worldview is.

In personal interactions, as over the Thanksgiving table with conservative relatives or in your social or business life with colleagues and coworkers, the first thing to realize is that, for the most part, conservatives believe deeply that they are morally right, that they and other conservatives are operating from the right moral principles. They don’t believe that they are immoral, and they don’t believe that right and wrong don’t matter. As moral beings, they want to be treated with respect. And in personal relationships, respect is appropriate.

The question is whether they are bi-conceptual, whether they have partly progressive values. So turn the conversation to an issue defined by nurturance: What have you done, or are you doing, that helps other people or helps your community? What makes you feel good about it? And so on. If there is nurturance there, bring it out and magnify it, and respect it. Try to keep conversation focused on such issues. Don’t try to argue against their conservative positions, and certainly not in their language. Listen. Be patient.

If you must discuss political differences, just be positive, starting with your values and with how you understand freedom and how it arises from citizens working together to provide public resources for everyone. Use your language, not theirs. Stay respectful….

There are deep truths that are known about how brains work, how our unconscious minds work, and the effect of language on the mind and brain. Those are vital truths, because only by mastering and using them can you avoid the traps of laundry list truths, truths that don’t add up to the communication of general progressive values, truths that have given us a Democratic Party that seems not to stand for any overriding value. Lists of truths that are not made meaningful by values are destined to be ignored. Make truths matter. Wed truths to values.”

This entry was posted in L. Randall Wray and tagged jobs guarantee, unemployment. Bookmark the permalink.