Speculation in the Commodities Market: Part 1

This week’s Dumb Investment of the Week is commodity funds. Commodities are physical products such as corn, oil, or sugar. Commodity investments only used to be a way that Wall Street parted institutional investors from their money, but over the past decade banks have been increasingly targeting individual investors either directly or through financial advisors, brokers, and mutual fund companies.

Prior to 2000, commodity markets were strictly regulated. Then, in 2000, the Commodity Futures Modernization Act was passed which, among other things, did away with position limits in commodities markets. While commodity index funds have existed since 1991, it wasn’t until recently that they became popular and could handle large inflows of funds. In 2003, several academics published research showing that commodities did not have strong correlations with other asset classes like stocks, bonds, or real estate. Wall Street, never having met a fee-generating idea it didn’t like, seized on this research and began creating and selling commodity index funds to retail and institutional investors. Over the better part of the next decade, $350B flowed to newly created commodity funds.

Investing in commodities sounds like it holds great promise. Here is a fine example of how the investment is pitched. This example comes from a Wells Fargo article written for their advisors.

The U.S. equity markets have been operating under a system of frequent ups and downs for several years, particularly as they tighten their ties to global markets. It’s therefore no surprise that some investment experts have sounded the call for Americans to use real assets to temper the risks associated with investing in stocks and bonds.

Investors should consider taking a second look at the growth opportunities offered by commodities, such as grain, oil, and precious metals, says Paul Christopher, Chief International Strategist in the Advisory Services Group of Wells Fargo Advisors. Business around the world is booming, and that class of investments is worth exploring – and not solely out of apprehensions about foreign market activity.

Should you go along with Wells Fargo and add your money to the $350B that has flowed to commodities related investments?

Commodities Are a Bet Against Human Ingenuity

While I agree that the demand for commodities will increase, that doesn’t necessarily mean the price will increase. It’s possible and even probable that the supply of many commodities will keep pace with the demand. If supplies of one commodity are constrained, then it’s likely that over time a new substitute product will be discovered or processes adapted to use a different commodity.

When you are investing in commodities, you are essentially betting against human ingenuity and invention.

Here are just a few examples of how technology is helping commodity supply keep pace with demand. The first graph below (taken from AgWeb.com) shows the increase in corn yield per acre in the United States from 1908 to 2011. The second graph shows the average soybean yield from 1924 to 2011 (taken from the Plant Sciences Department at the University of Missouri). 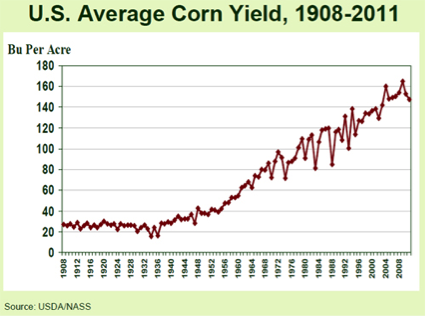 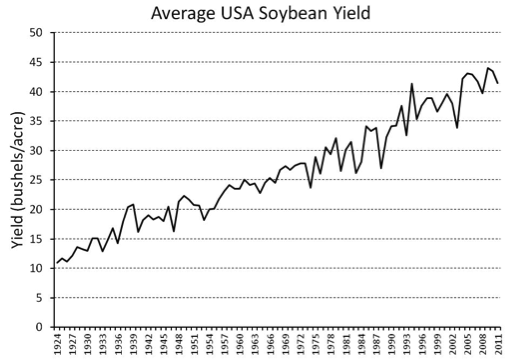 In both we see supply increasing due to technological advancements.

Think about how living standards and technology have advanced in the past 50 years, 100 years, and even 1000 years. A bet on commodities is a bet against all of the inventors, scientists, technologists, miners, famers, entrepreneurs, and business owners among the 7 billion people on Earth. Not a bet I’d want to make!

Even if you don’t buy the human ingenuity argument, there are some structural flaws in the way funds invest in commodities that prevent investors from realizing significant gains. Since funds usually don’t want to buy the actual commodities themselves, they use something called a futures contract. These contracts are bought and sold on various exchanges.

The process of buying commodity futures contracts works like this. Say you think the price of oil is going to rise in the future, so you purchase a contract to take delivery of a barrel of oil three months from now at a price of $100. When you purchase the contract, you are required to put up some amount of money on margin, ostensibly to ensure that you have the ability to pay. Let’s say we put up $10. This money is typically put in an escrow account and invested in short-term, risk-free Treasury bills. After two months it turns out we were right and oil prices went up to $110. Then, we sell our contract to take delivery at $100 for $110 (the price at which a commodity is currently trading is called the “spot price”) which nets us a profit of $10. This profit is called the “spot return.” We also want to continue to stay long on oil, so we need to “roll” our money over into another futures contract. We purchase a new contract for delivery in three months for $120. Notice that we sold a contract for $10 profit (spot return) but now rolled it into a new contract that was $10 more expensive. Our $10 loss is called the “roll return.” What happens to our money that is earning in the escrow account? That return is called the “collateral return” (because we put the money up as collateral against our contract).

So in this example, our spot return ($10) and our roll return (-$10) cancel each other out and we are left just our collateral return, which is the same as the return on T-bills. Even though oil prices were rising, it doesn’t look like we made out very well because each futures contract was progressively more expensive. When commodities’ futures contracts are progressively more expensive, it is said to be in “contango,” which, as we saw in our example, is usually unprofitable for those looking to continue to maintain long-term investments in that market. The opposite of contango is “normal backwardation” or “backwardation,” which means that as futures contracts get longer the prices fall. This is more profitable to long-term commodities “investors.”

Prior to the Commodity Futures Modernization Act 2000 (CFMA) and the advent of commodities index funds, markets were usually in normal backwardation (good for long-term investors). For the last 10 years, however, a vast majority of markets have been gripped in a vicious contango. The oil market is a prime example.

If this is confusing, then just remember in the chart below, green means it’s easy for commodities index funds to make money and red means it’s difficult. 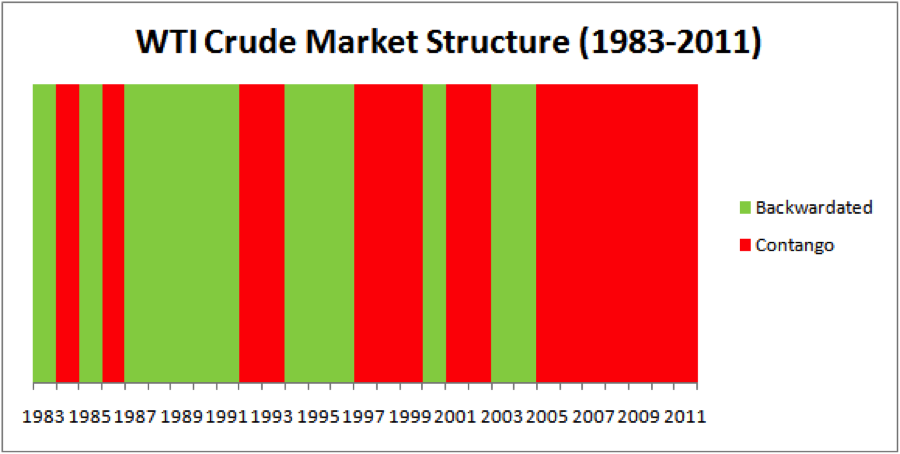 When markets are in contango, it is difficult for funds to earn a profit despite rising prices. So why are most commodity markets in contango?

Institutional Investments Have Had an Impact

Commodity markets were and are intended as a place for producers and/or users of commodities to enter into contracts for the delivery or sale of commodities at guaranteed prices. The markets helped reduce volatility in commodity prices and allowed producers and consumers to lock in prices and better manage their budgets and production. Participants in commodity markets can be divided into two categories: hedgers and speculators.

There are two categories of speculators. The first type is a speculator that hoards the physical commodity itself. An example of this would be a speculator chartering tankers and filling them with oil and then mooring them offshore with the hopes of selling the oil at a higher price later. The second type is someone who buys a future contract (or sells it) on one of the commodity exchanges and hopes to resell that same contract at a later date or when it expires at a higher (lower) price. In both cases, the individual does not intend to purchase the commodity for consumption.

The chart below shows the total assets that are linked to the S&P Goldman Sachs Commodity Index. 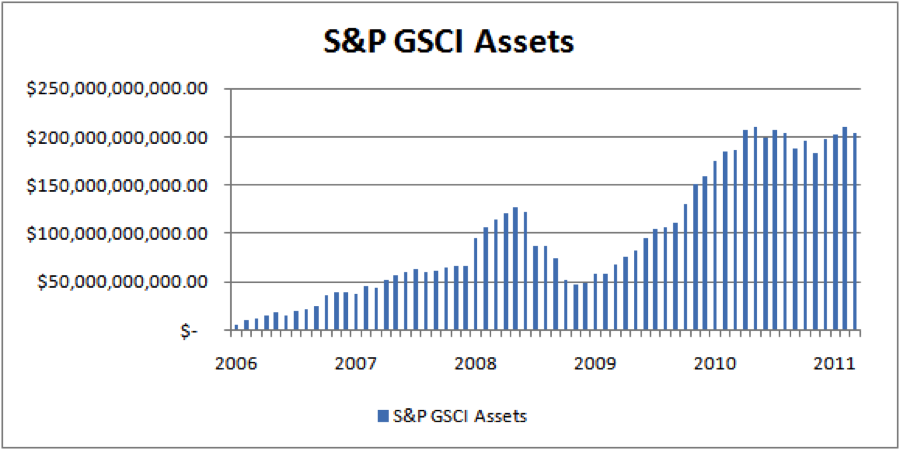 Commodity index funds track other indexes, such as the Dow Jones-UBS Commodity Index, but the S&P GSCI remains the most popular.

To understand how this $350B inflow of speculative money has influenced the commodity markets, let’s first look at the participants of the markets pre-CFMA 2000 and post-CFMA 2000 (the index fund era).

Participants in Commodity Markets Have Changed 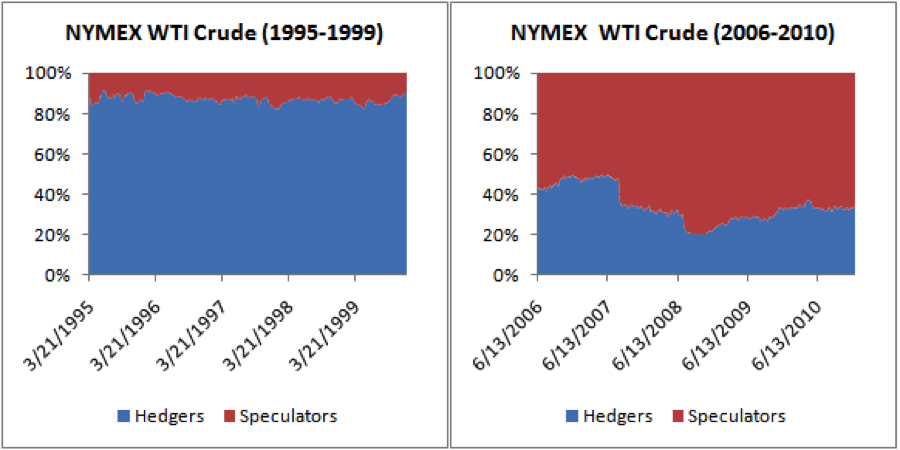 Some markets also have data available on the number of speculators that are actually just index funds (think the commodity ETFs and mutual funds that are springing up). Again, we see that speculators made up the minority of the market (about 35%) from 1995 to 1999. Then, from 2006 to 2010, they made up the majority of the wheat market. We can also see that the increase in speculators is almost all due to commodity index funds.

The proof is in the pudding and long-term real returns (and I do mean long term!) The chart below goes all the way back to 1871, showing that commodities returns have been barely positive. 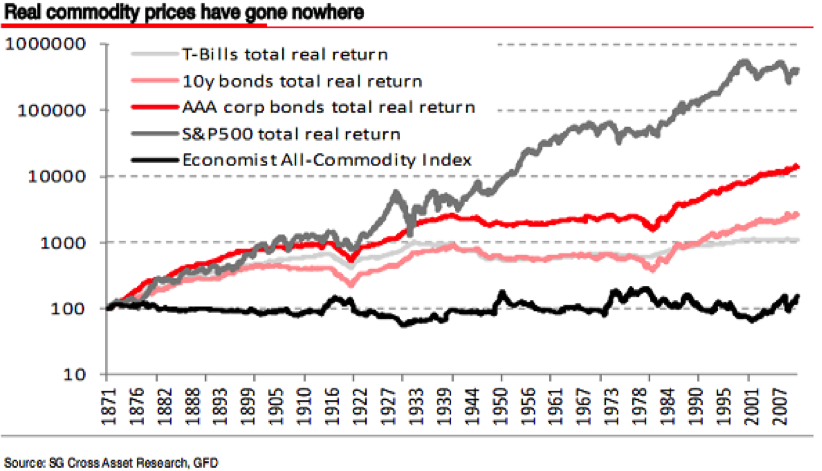 Looking at three community index funds most often recommended to investors, we can see the same thing–minuscule returns or even a loss of money.

PowerShares DB Commodity Index Tracking Fund (NYSE:DBC)
As shown by the graph below, this fund has earned on average only 1.62% annually

iShares S&P GSCI Commodity-Indexed Trust (NYSE:GSG)
Things are even worse for the iShares product, which shows losses of -5.49% per year on average. 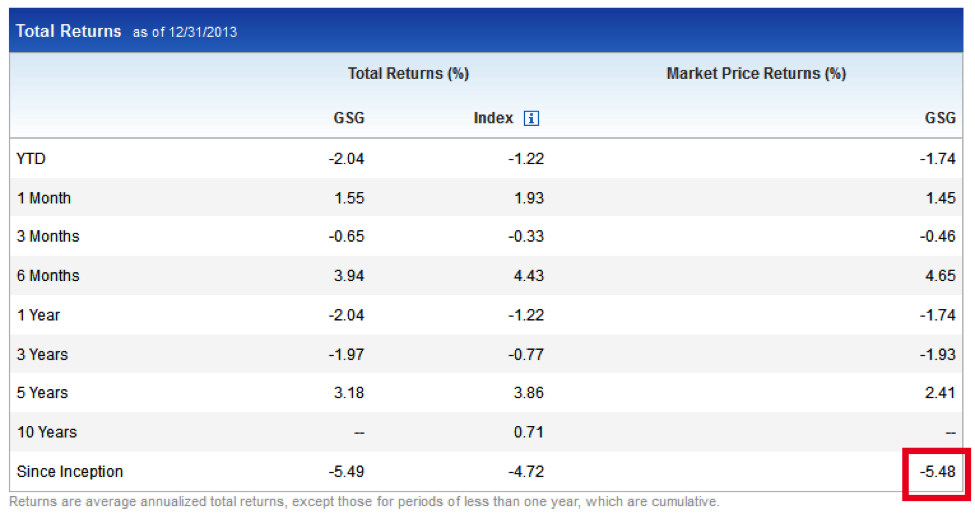 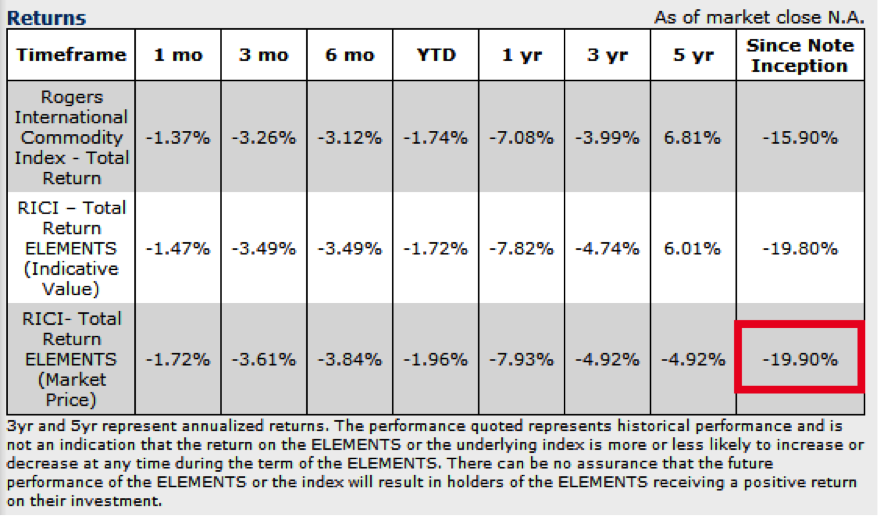 Do you want an asset class that has a return uncorrelated to the market? Stuff your money under the mattress. You’ll save yourself the high fees and avoid any investment losses. If you want to invest, stick to a diversified portfolio of traditional assets like stocks, bonds, and real estate.

This entry was posted in Ben Strubel and tagged commodities, commodity funds. Bookmark the permalink.

7 responses to “Speculation in the Commodities Market: Part 1”