How Many MBD Do We Need to be Geniuses?

Jamie Dimon is the smartest U.S. banker – as he, the Senate banking committee, the media, and President Obama told us.  They told us this in the context of Dimon’s bank, JPMorgan, suffering a huge loss due to (if Dimon is to be believed) his top lieutenants’ stupidity.  We are told that Dimon is the smartest banker because he ordered JPMorgan to sell its collateralized debt obligations (CDOs) (“green slime” “backed” primarily by endemically fraudulent “liar’s” loans) at the end of 2006 and close its special investment vehicle (SIV).

The articles that gush about Dimon’s decisions sometimes explain that Dimon had been a proponent of nonprime loans, CDOs, and SIVs.  Indeed, the SIV was a Bank One entity Dimon championed when he was that bank’s CEO prior to its 2004 acquisition by JPMorgan.  These articles give credit to Dimon for creating an “All-Star team” of managers and eventually following those managers’ advice despite Dimon’s contrary views.

One article explains that Dimon’s “All-Stars” made the correct calls on CDOs and SIVs because of their unique financial acumen in understanding that when spreads on credit default swap (CDS) protection for CDOs increased in 2006, it indicated that market participants believed that the CDOs’ risk had grown.  The article attributes the success on subprime loans to JPMorgan managers’ recognition in 2006 that their mortgage servicing data on JPM’s subprime loans showed that they were experiencing greatly increased delinquencies and defaults.

Dimon is brilliant we are told because he listened to those with such sophisticated financial skills that they understood the risk of SIVs investing in CDOs “backed” (inadequately) by subprime loans.  That means that several members of his All-Star team are geniuses because they got it right while “in the United States … everyone thought mortgages were completely safe.”  Dimon made this claim about what “everyone thought” in his March 30, 2012 letter to shareholders (p. 26). 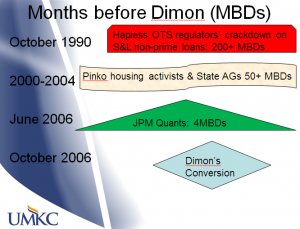 This leads me to announce the concept of Dimon distribution of financial IQ, where the unit of measure is the MBD (months before Dimon got it right).  Dimon’s All-Stars are geniuses because they understood about subprime and SIVs 4 MBD.

To be gentle, the canonization of Dimon and his All-Star team on the basis of their alleged unique financial sophistication demonstrated through observing increasing CDS spreads on CDOs and rapidly growing subprime defaults tells us far more about how pathetic finance executives are at our most elite firms and how credulous JPM’s press flacks believe the financial trade press has become.  My minimum expectation of any undergraduate student who takes my class in public finance at UMKC is that they would understand that sharply increasing CDS spreads and rapidly growing loan defaults demonstrate severe credit problems.  I now know that we are graduating financial geniuses because they can deliver a minimum MBD of 4.

What we haven’t established yet is which deciles Dimon and his All-Stars are in.  His flacks want us to believe that Dimon is in the top decile, with his 4 MBD All-Stars at the top of the decile.  After all, Dimon claims that “everyone” else got it wrong.

I investigated Dimon’s claim that “everyone” else got it wrong and his agreement with Senator Bob Corker (R. Tenn.) that the regulators are always behind the industry in identifying problems.  I use the MBDs of those that got it right to figure out more objectively which decile Dimon is in the distribution relative to the supposedly hapless governmental employees, academics, and housing activists.  The West Region of the Office of Thrift Supervision (OTS) cracked down on nonprime loans (subprime and liar’s loans) in 1990-1991 and used normal supervisory means to drive such loans out of the industry.  (We had jurisdiction over Orange County, California – where most American financial frauds flourish.)  We acted quickly enough to prevent any major failures among savings and loans (S&Ls), but many of the worst frauds left the industry (or were “removed and prohibited” from it by our enforcement actions) and formed mortgage banks that had no federal deposit insurance and were not subject to our regulation.  The most notorious was Roland Arnall, who controlled Long Beach Savings.  He gave up his federal S&L charter and formed the mortgage bank Ameriquest.  Ameriquest was the most notorious fraud and predatory lender among mortgage banks (and JPMorgan was one of its leading funders).  Other mortgage banks making liar’s loans experienced severe losses during this era.  The Mortgage Asset Research Institute (MARI) (the mortgage industry’s own anti-fraud experts), reported orally at the Mortgage Bankers Association (MBA) annual meeting in 2006 and in writing to every MBA member that:

“[I]t appears that many members of the industry have little … appreciation for the havoc created by low-doc/no-doc products that were the rage in the early 1990s. Those loans produced hundreds of millions of dollars in losses….”

We, the leadership of the OTS West Region, had a MBD of 192 (late 1990 to late 2006).  Our examiners in the field had figured it out roughly a year before we killed nonprime lending by S&Ls, so their MBD was over 200.  We, the leadership of the OTS West Region, never thought we deserved any particular credit for the crackdown.  Liar’s loans were an easy call.  Not underwriting mortgage loans leads to extreme adverse selection and a negative expected value to lending (the loans will, on average, lose money).  Only controlling officers engaged in accounting control fraud will make large loans without underwriting.  We understood that immediately because we understood mortgage lending and accounting control fraud.

My most recent column explains that Dimon now understands what we knew in the mid-1980s.  His letter to shareholders explains: “Low-quality revenue is easy to produce, particularly in financial services.  Poorly underwritten loans represent income today and losses tomorrow.”

The second reason for appropriate modesty was that our examiners were, as always, well ahead of us.  They were the people closest to the facts and we were merely smart enough to listen to them and then apply hundreds of years of banking experience with the consequences of failing to underwrite before making large loans.  Note that the industry, traditional and nonprime lenders (including Dimon and his All-Star team), was decades – hundreds of months after regulators (MARs) on understanding the disaster that was nonprime lending.

After the 1990-1991 OTS crackdown nonprime loans by S&Ls, four groups demonstrated exceptional MBDs.  They were housing advocates, state regulators and prosecutors, heterodox economists, and federal examiners and supervisor.  ON SIVs, four law professors deserve exceptional praise for their MBDs.  I am working on a long, academic piece on this subject and the refusal of the senior leaders and economists of the banking regulatory agencies, particularly the Federal Reserve, to restrict the use of liar’s loans, CDOs, and SIVs.  Here I will summarize what my research has found.  Housing advocates have MBDs of over 60.  The NAACP and ACORN (yes, that ACORN) advocated using the Home Ownership and Equity Protection Act of 1994 (HOEPA) to stop fraudulent liar’s loans.  The Federal Reserve had unique authority under HOEPA to ban liar’s loans by all lenders – even those that were normally not subject to federal banking regulation.

State regulators and prosecutors made compelling cases to the Federal Reserve early and often urging the agency to use HOEPA to stop fraudulent liar’s loans.  The Office of the Comptroller of the Currency (OCC) lead the resultant federal attack, but the attack was on the state regulators and prosecutors who were trying to stop the fraudulent and predatory loans.  Most infamously, the OCC joined the Clearing House, the lobbying group created by the handful of largest U.S. banks, in suing the Attorney General of New York.  The suit was prompted by a request for data that AG Eliot Spitzer sent to JPMorgan.  A preliminary inquiry from already public data indicated possible predatory lending by JPMorgan and other elite banks.  Dimon aggressively sought to block Spitzer’s access to the embarrassing data.  JPMorgan helped induce the Clearing House and the OCC to bring suits declaring that the states had no power to investigate the nation’s largest banks.  The plaintiffs sought a preliminary injunction to block the NY AG from obtaining access to the data.

(A similar investigation by Spitzer’s successor, AG Andrew Cuomo, documented that Washington Mutual (WaMu) kept a blacklist of appraisers.  The blacklist banned the use of honest appraisers – something that only a fraudulent lender would do.  Dimon later decided to acquire WaMu and use many of its personnel to make and service loans, which led to extensive lawsuits against JPMorgan.)

Dimon had a very large MAR, but he wasn’t simply far slower than the state regulators and prosecutors to understand the fraud, predation, and discrimination endemic to nonprime lending.  Dimon was one of the principal forces blocking the state prosecutors and regulators from acting to prevent or reduce the crisis.  Dimon caused JPMorgan to continue to pursue its effort to block the NY AG’s investigation for over two years (into 2009) after he supposedly had his Road to Damascus conversion in late 2006 and ceased to be a vigorous supporter of nonprime lending.

A number of heterodox economists had very large MBDs.  Jamie Galbraith has a superb article on this point.

Many federal examiners and supervisors, and a few senior regulators, had large MBDs ranging over 40.  The Financial Crisis Inquiry Commission documents four major efforts against SIVs, nonprime loans, and CDOs by Federal Reserve regulators.  There were two briefings by Federal Reserve supervisors about the major banks’ (including JPMorgan) aiding and abetting Enron’s use of SIVs to commit massive accounting control fraud and evade U.S. taxes and about the enormous rise of nonprime lending at the largest banks, including JPMorgan under Dimon’s leadership.  In each case, Alan Greenspan and senior Federal Reserve economists responded by bitterly attacking the regulatory personnel for criticizing the largest banks’ fraudulent practices.  Greenspan also blocked Federal Reserve Board Governor Edward Gramlich’s request to send examiners in to find the facts about nonprime lending abuses.  Greenspan and Bernanke blocked the use of HOEPA to bar endemically fraudulent liar’s loans.

Dimon has singled out the termination of SIVs as a purported triumph of the “markets” not brought about by regulation.  JPMorgan, under Dimon’s direction, was a major factor preventing the effective regulation of SIVs.  The leading banks, including JPMorgan (before Dimon’s tenure) eagerly aided and abetted Enron’s frauds.  In 2004, the banking regulators proposed a rule restricting SIVs.  JPMorgan, now under Dimon’s control, was a leader in the lobbying effort to emasculate the proposed rule.  That effort continued through 2007 – after Dimon’s Road to Damascus conversion on SIVs.  JPMorgan operated primarily through its favorite lobbyist, the Clearing House.  The lobbying was spectacularly successful, the rule was emasculated.  JPMorgan could have saved the rule and greatly reduced losses during the financial crisis if it had supported an effective rule against SIVs.  Dimon was disingenuous in citing the death of SIVs as a market success and a regulatory failure.  SIVs were a market catastrophe that led to the meltdown of systemically dangerous institutions (SDIs) – a meltdown stopped only through the provision of massive amounts of federal guarantees and subsidies.  It was Dimon and the anti-regulatory agency heads he helped to suborn who prevented the effective regulation of SIVs and helped produce the crisis.

Dimon did not take an industry leadership role in cleaning up even the most endemically fraudulent practices that he says he recognized in 2006 posed grave risks to the global economy.  The people I have praised for their MBDs sought to protect the nation.  It is pathetic that so many Senators fawned over Dimon and begged him to give them policy advice.  When will the Senate seek policy advice from those with the largest MBDs?

One response to “How Many MBD Do We Need to be Geniuses?”