Should European Nations Repudiate the Debt? 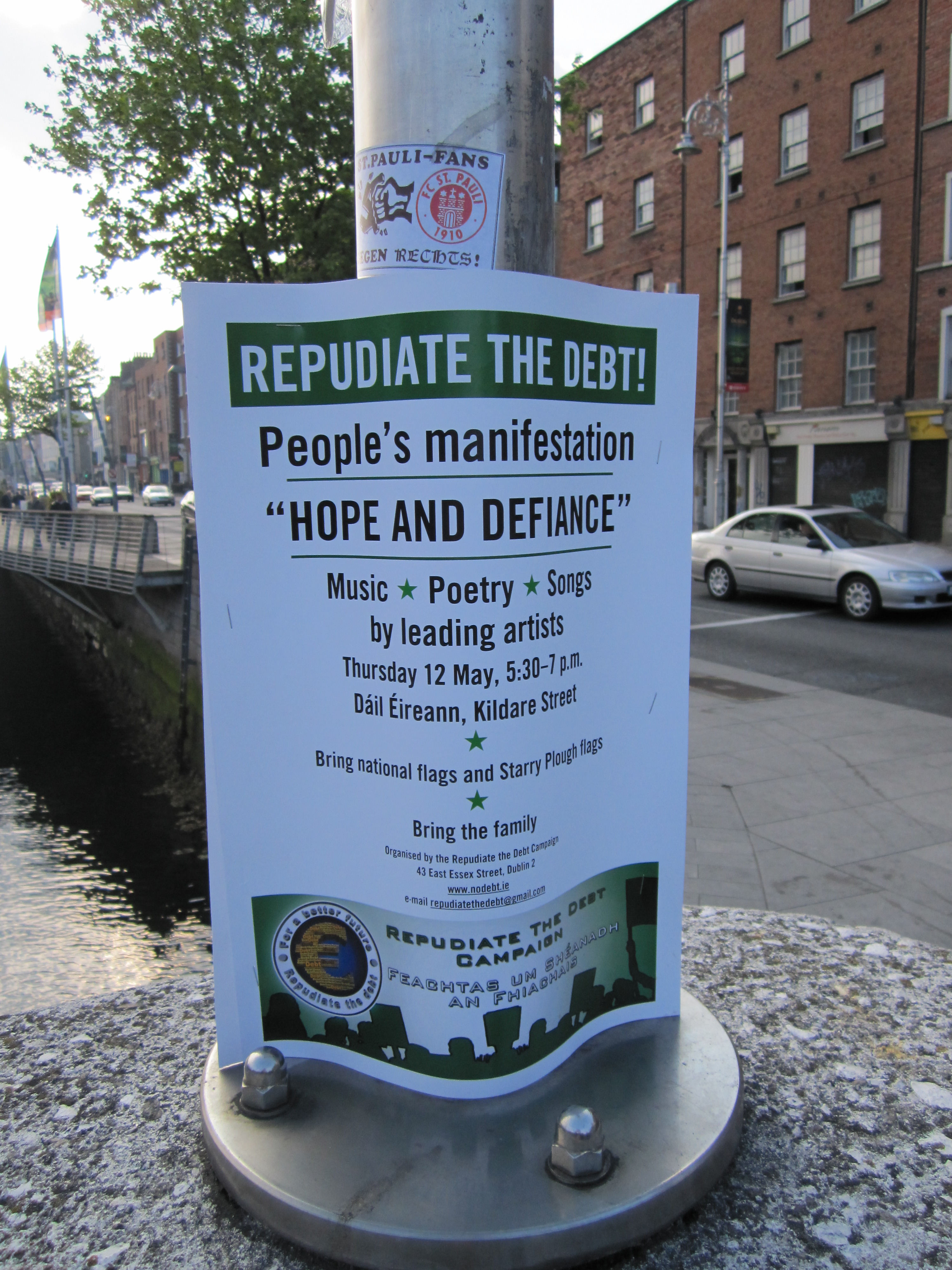 It is becoming increasingly clear that the global economy (at least in the West) is heading for a steep downturn. Almost all the US data coming out in recent days have been bad. The UK and Japan are in austerity mode, with predictable results. Worst of all is Euroland. It has imposed severe austerity—the modern day equivalent of Medieval blood-letting—on its periphery nations. These nations are loaded with debt. In the case of Ireland, which had been a model of a Neoliberal utopia, the government got into debt by taking over its banks’ debts. In an unfathomable act of charity, this was done only to save French and German banks—which held the unserviceable and unguaranteed Irish bank debt. In gratitude for Ireland’s equanimity, the EU imposed the equivalent of IMF sanctions on Ireland. The government is supposed to downsize and squeeze blood out of its population in order to reduce its debt load—which has thrown it into recession and reduced tax revenues. The worst thing you can do to a debtor is to force her to reduce her income. But that is exactly the Medieval medicine the EU prescribed for Ireland. The story with the other highly indebted euro nations is similar—if not in the causes of their particular debt disease, at least in the remedy prescribed.

There is now really no choice. The periphery nations must band together and go to the EU Parliament to present a unified voice. There are only three courses of action. The first is to abandon the euro, with each country adopting its own sovereign currency. For convenience, each could simply return to its pre-euro currency. All debts would be redenominated in its new (that is to say, old) currency. Each country would then adopt a package of stimulus policies to achieve growth with full employment. By returning to its own sovereign currency, no national government would have any problem servicing its debt. Each country could tell the ratings agencies to take a hike—if Moody’s et al are too stupid to recognize that a government operating with its own currency can always service its debt, each country could immediately pay off the debt in its own currency. All that really amounts to is crediting bank accounts with reserves and retiring the debt. As it reduces interest payments, that is actually a deflationary policy. However, any deflationary pressures can be offset by stimulative fiscal policy.

There is a downside to this policy. Holders of euro-denominated debt will be subject to redenomination in a new (old) currency. They will likely go to court in the EU to sue for recovery. This would lead to a long-drawn-out and nasty process that would at least buy time. I am not a lawyer and will not speculate on the likely results but I suspect that rulings will go against the “defaulters” and that sanctions will be imposed. Meanwhile, French and German banks will become insolvent, France and Germany will try to save them and will become exactly like Ireland—with huge and unserviceable government debts after they nationalize their private bank debt (ironically, in Germany’s case, its worst banks are already nationalized). Perhaps at that point they will join Ireland and the other formerly EMU nations in abandoning the euro. The last one out will need to shut off the lights. Say bye-bye to the euro. And hello to renewed hostility among European nations. We’ve been there before, with world war results.

The second approach is to stay on the euro but to default on euro-denominated debt. Now, in truth, there is nothing wrong with default by private sector debtors who are not insured by governments. Happens all the time. Debts owed to creditors are then pursued through bankruptcy courts. Ireland, however, decided to nationalize private debts of banksters. Unfortunately, sovereign default is not so simple. Yes, default by government on debt happens all the time, too. Remember Orange County? The problem is that creditors expect government to squeeze blood out of oranges (another Medieval technique) to pay off debt. In their otherwise awful book (This Time is Different), Carmen Reinhart and Kenneth Rogoff argue that when it comes to “sovereign” defaults, default is always in some sense voluntary. (It is noteworthy that they are unable to find a single case of a true sovereign default; that is to say, a default by a sovereign government on its own floating rate currency. So far as I can tell, every case of government default they identify has to do with a pegged exchange rate or currency board. But that is a topic for another day since the EMU countries essentially do have currency board arrangements.) Ireland could continue for some indeterminant period to let more blood out of its population. After all, the Irish are used to suffering. Perhaps with sufficient austerity, a modern equivalent to the potato famine could be reproduced. Young Irish are already emigrating in droves. Creditors could demand more Irish blood, until Ireland is completely depopulated. All that would be left would be the land—with foreclosure moving it to the portfolio of the French and German banks. No doubt they are drooling in anticipation. (Anyone who has ever been to Ireland can understand why.)

Defaulting whilst staying on the euro appears to me to include all the negative effects of leaving the euro but with none of the benefits. For example, Ireland and the other periphery nations would still be stuck with a vastly overvalued currency. At least if they abandoned the euro they could competitively devalue against German exporters. They will get sued in either case and rulings in EU courts will probably go against them. Perhaps it is best to leave the EMU and even the EU to protect their domestic economies if one is going to default.

The last option is to band together and to insist on EMU-wide reformation. Debts must be restructured and written-down. To be sure, default as well as leaving the EMU must be retained as a bargaining chip—but it should be “en mass”. And it should be made clear that the best option for both the indebted nations as well as the creditors is to come to mutually beneficial terms. European banks are, broadly, toast. Not only did they buy toxic US waste, but they also created plenty of their own. And they owe much of it to each other. Like the biggest US banks, they are “too big to fail”—which is to say that they are “systemically dangerous institutions” in Bill Black’s terminology. That means they must be “resolved”—downsized and closed, with assets and liabilities distributed to smaller institutions. Netting bad assets that banks owe to each other (within and across borders) would go a long way to downsizing exposures. (And banksters should be incarcerated. I suspect that the main reason that big banks are not closed is because governments know they will uncover massive go-to-jail fraud. It is not really that the banks are too big to fail but rather that they are too fraudulent to seize. If any honest examiner ever entered the doors of Goldman Sachs, for example, he could not leave with issuing thousands of subpoenas that would include the names of former, current and prospective future Treasury department officials.)

It is time to admit that the EMU was designed to fail. I have been arguing since the mid 1990s that the first serious financial crisis would bring it down. We are in that crisis. It is time to recognize that reality. The debts must be resolved and a new fiscal arrangement must be created. As I have argued many times, the EMU members are like US states, but without a Washington to help out in times of crisis. The chickens are here and they are roosting. We have come down to one viable choice—if the goal is to preserve European union. In addition to dealing with the debt, the EU must create a fiscal force similar in size to the US Treasury.

9 responses to “Should European Nations Repudiate the Debt?”