A perceptive reader wrote: “I think MMT needs someone to do whatever it is that Charles Darwin did.”

Well, Darwin wrote “On the Origin of Species”. A great book. Not something your average homeless Burger King taxi driving immigrant is reading. Yes, someone needs to teach evolution to the taxi drivers. Heck, I wish someone would teach evolution to my local Kansas School Board officials—who reject it as “just a theory” and obviously a poor competitor to the story of creation that is by contrast infallibly true.

But we need the “Origin of Species” first, before those teachers and popularizers and monkey trial lawyers (who, of course, LOST their case) can win in the court of public opinion.

The MMP is responding to a request for a coherent, from the ground up, exposition. I have asked several times for patience. Both by those who’d rather just take to the streets now, and from those who want everything explained all at once in an elevator pitch. If at the end of the year you want your money back, tuition refunds will be provided. If you do not need a Primer, go ahead and start the organizing. If you are not interested in MMT, look elsewhere. But if you want a clear and coherent Primer that begins at the beginning, you’ve found the right URL.

On to substantive comments.

Accounting Identities. I knew we would have our skeptics. There are two types of complaints.

First there are those who are skeptical of identities altogether. To them it looks like we put two rabbits into the hat and then pulled out two and expect applause. Or, it is like saying 2+3=5 and in base 10 math it cannot be anything different. Surely we rigged the results?

Well, in some sense, yes we did. We first rule out black helicopters that drop bags of cash into backyards in the dark of night. We also rule out expenditures by some that go “nowhere”—that is, expenditures that are not received by anyone. Finally, we rule out expenditures that are not in some manner “paid for”. If our whole economy consists of you and me (I get to be Robinson Crusoe, you get to be Friday—or vice versa), then if I spend, you get income. If you spend, I get income. I can consume or save, and you can consume or save. We denominate our spending and income and saving and surpluses and deficits in “dollars” and record transactions by scratch marks on the big rock by the pond. We’ve discovered double entry bookkeeping and use it because it is a handy way of keeping track. (We trust each other, but we’ve got bad memories. I accept your IOUs denominated in dollars, and you accept mine.) Ok, so that is the set up—the rabbits and the hat. Nothing up our sleeves.

You hire me to collect coconuts from your trees, I hire you to catch fish in my pond. You own the coconuts, I own the fish—due to our property rights in our respective resources; as workers we only have a right to our wages. (Ain’t capitalism grand?) We each work 5 hours at a buck an hour. We record these on our balance sheets on the big rock: on your balance sheet, your financial asset is my IOU; my financial asset is your IOU. At the end of the first day we each had income of $5 (recorded on our asset side) and we each issued an IOU to pay wages of $5 (recorded on our liability side). (On my balance sheet I hold your $5 IOU as my asset; and I have issued my IOU to you in the amount of $5, which I record on my liability side. And vice versa.)

Now I want to buy coconuts from you and you want to buy fish from me. I “pay for” the coconuts by delivering back to you your IOUs and/or I issue an IOU. You “pay for” fish by delivering back to me my IOUs or by issuing an IOU. Let us say I consume $5 worth of coconuts (I return all $5 of your IOUs—crossing off the entry on the Big Rock) and you consume $4 worth of fish (returning to me $4 of my IOUs and retaining $1 of my IOU) because you are more frugal.

At the end of the day, I’ve got $5 worth of coconuts but have had to issue a an IOU of $1 (I used all of my income, the $5 earned wages, and you’ve still got $1 of my IOU since you did not spend all your wages); you’ve got $4 of fish plus $1 left of your income (equals your financial saving). My deficit spending has been $1 and your surplus (or saving) has been $1. They are equal (not magically—we put the rabbits in the hat), and indeed your saving accumulation takes the form of a money claim on me (my debt). When we net out all the money claims, what we are left with is the real stuff (coconuts and fish).

To be sure, we have left out of this analysis much of what is interesting about the economy—no banks, no government, no “green paper” currency, and so on. All we did was to play a little game of IOU and UOMe. But we did demonstrate the simple sectoral balance conclusion: the financial deficit of one sector (me) equals the surplus of the other (you). And that once we net out the financials, we are left with the real stuff (fish and coconuts). No magic involved.

And, yes, we can all of us accumulate in real (nonfinancial) terms. For example, we can all grow our own crops in our backyards, accumulating corn that is not offset by a financial liability. For most of the time humans have been around (after Darwinian evolution) we managed without money. Still, we fed, clothed, cared for, and fought with, our fellow humans. For the most part, the “Modern Money Primer” will be concerned with “money”—that is, the financial accounting part, and it is here where every deficit is offset by an equal surplus (somewhere) and every debt is held by someone as financial wealth—so the net is zero. In terms of our Lake Wobegone analogy, we can all accumulate in real terms (we all have IQs above zero) but our finances net to zero (our IQs average to—well—average).

Second, some readers have preferred to come up with alternative identities. Yes, you can do that. We can choose to divide up into alternative sectors: rather than going with private domestic + government + foreign, we could divide into sectors according to hair color: blonde + black + red + blue + brown + silver etc…. For our purposes (to come in subsequent blogs) our division is more useful. It is not unusual to separate off the foreign sector on the basis that it (mostly) uses a different currency (actually, multiple currencies), so we are going across exchange rates. It is also not that unusual to separate government from private, and is particularly useful in discussion of “sovereign currency”—which after all is the main purpose of this Primer. For convenience we add state and local government to the federal government even though only the federal government is the issuer of the sovereign currency. What is, admittedly, unusual is to add the households and firms together (as well as not-for-profits). This is in part due to data limitations—some data are collected this way.

One reader perceptively noticed that a more common approach is to begin with the GDP identity (GDP = consumption + investment + government purchases + net exports; which equals gross national income). Without getting overly wonky, the GDP comes out of the NIPA accounts (national income and product accounts) that have some well-known disadvantages for those of us who worry about stock-flow consistency (the topic of future blogs). NIPA actually imputes some values and things don’t quite add up (a rather large and nasty “statistical discrepancy” is used to fudge to get to the identity). Just as one example: most Americans own their own homes, but certainly we all “consume” what is called “housing services”—the sheer enjoyment we get out of having some shelter over our heads in a rain storm. So statisticians “impute” (make up some economic value for that enjoyment), adding it to GDP. What we do not like about that is that no one really has to “pay for” the consumption of “housing services” for owner-occupied housing (say, you paid off your mortgage 5 years ago, but the statistician records $12,000 worth of enjoyment you consumed this year). Another area that is problematic comes in the treatment of saving. Typically, this can be done in one of two ways: either saving is simply a residual (your income less your consumption) or it is the accumulation to your wealth. In many calculations, when there is a real estate price boom, the value of the housing stock increases, which means our wealth increases, which must mean our saving increased. However, there was no income source that allowed us to save in financial terms.

Since this Primer is very concerned about “accounting for” all spending, all income, all consumption, and all saving, we do not want to include such imputations that do not have a financial flow counterpart. So, we prefer to work from the flow of funds accounts, which are stock-flow consistent (or, at least, closer to consistency). Now, in truth, NIPA data are more readily available for many countries than are flow of funds data, and so sometimes we do use the GDP equation rather than our sectoral balances equation. Here is a comparison:

You can see that these are reasonably close approximations. Roughly, if private saving exceeds investment, then the private sector will be running a surplus; if taxes are less than government purchases, the government is running a deficit; and if imports exceed exports the foreign sector is running a surplus. We can get even more wonky and put in government transfer payments (things like unemployment compensation that add to private sector income) and international factor payments (flows of profits earned by American firms from abroad—that reduce our foreign imbalance). But we won’t do that here. We will usually work from the sectoral balances (thus, flow of funds) rather than from the GDP identity (NIPA) but you can do the mental gymnastics if you want to do the conversion.

One commentator wondered why we would call an “imbalance” a “balance”: ie: if the private sector runs a deficit why would we refer to that as the private sector’s “balance”? Well, you have a checking account “balance” that is probably positive. If you write a check for more than your “balance” and if you have automatic overdraft coverage then you will now have a negative “balance” in your account! So, the “balance” can be either positive, zero, or negative for any sector.

A final note regarding NAFA: I would just say that NAFA is the standard term from the stock-flow consistent literature, which, if Ramanan’s correct, ironically started in the UK. See Zezza’s paper here, which, independent of MMT, uses the same terminology. Further, it’s a term completely consistent with the accounting measure desired, while there’s not necessarily any reason to name items the exact same way as one particular nation’s accounts do (“net saving” being another example).

Thanks for the comments. Keep them coming. Watch for Blog 3 next Monday.

Ireland versus the United States: Only One of Them Has a Debt Crisis 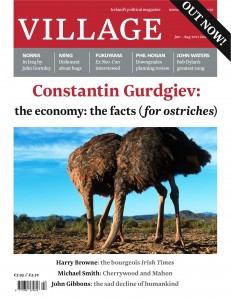 Stephanie Kelton recently sat down with Dara McHugh, Co-Ordinator of Dublin-based Smart Taxes, to discuss Ireland’s debt problems and the economic prospects for the Irish economy. The interview appears in the June-August issue of Ireland’s Village Magazine.