John Cochrane Loves the Rule of Law (Some Exceptions Apply)

As Brad DeLong aptly puts it, John Cochrane was once an economist.  Cochrane is now a right wing ideologue surrounded by similar ideologues at Hoover.  He is pushing his new chapter in a Hoover book entitled American Exceptionalism in a New Era.  His chapter’s title is “Law and the Regulatory State.”  I will be writing several articles responding to Cochrane’s chapter, but this first piece concentrates on one key belief that Cochrane said he held that we all agree with.  My point is that Cochrane is not living up to his claimed beliefs, which he summarized in his introduction.

To be a conservative—or, as in my case, an empirical, Pax-Americana, rule-of-law, constitutionalist, conservative libertarian—is pretty much by definition to believe that America is “exceptional”—and that it is perpetually in danger of losing that precious characteristic. Exceptionalism is not natural or inborn but must be understood, cherished, maintained, and renewed each generation—and its garden is always perilously unattended.

This first column shows that under Cochrane’s own reasoning the “danger” to the “precious” “rule of law” has never been greater in the last 50 years.  Instead of “cherish[ing]” and “maintain[ing]” the “garden,” Cochrane has chosen to leave it “perilously unattended” because of his fanatic partisanship.  Trump is ripping up and sowing salt in Cochrane’s “precious” “garden” and Cochrane stirs himself primarily to attack Trump’s critics.  Brad’s description requires amendment.  Cochrane was once an economist and once a self-described “rule-of-law constitutionalist, conservative libertarian.”  Now, he is an unexceptionable apologist for Trump’s authoritarianism, venality, and corruption.  Whatever remains of Cochrane is what you get when you burn a substance and retain only its most noxious waste gases. END_OF_DOCUMENT_TOKEN_TO_BE_REPLACED 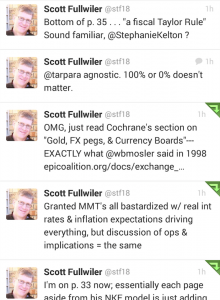 Honest Mom, I only bought the new Playboy to read the article on UMKC Economics

The UMKC economics department is featured in an article in the current Playboy that discusses the failure of theoclassical economics and economists to admit their theoretical and policy errors.  The devotion of theoclassical economists to those errors has proven so dogmatic that their disastrous policies have created the ever more criminogenic environments that drive our recurrent, intensifying financial crises. END_OF_DOCUMENT_TOKEN_TO_BE_REPLACED