How Many Lies Can the WSJ Pack into a Chart on Liar’s Loans?

This is the second article in my series prompted by the Wall Street Journal report that “big money managers” want to bring back “liar’s loans.”  Given that the best study of liar’s loans during the crisis found a fraud incidence of 90% — this is a startling proof of how openly addicted to fraud the “big money managers” remain.  It demonstrates some of the terrible costs of the Department of Justice’s refusal to prosecute the fraudulent loan originators’ controlling officers.

In this installment I lay out briefly the lies that the banksters made, and continue to make, about liar’s loans and why those lies are so harmful.  The WSJ chart on liar’s loans faithfully repeated those lies as if they were revealed truth.  The chart is shown below.  Let us count the lies.

Lies 1-3: “Dubbed ‘liar loans’ after they were abused during the housing crisis….”

That’s actually three lies in a single clause, which may be a record even for the WSJ.  First (and second), they were called liar’s loans well before the 2008 crisis – by the lenders making the loans, not their critics.

Third, they were not “abused” – as if they were victims.  They were the fraudulent “ammunition” that optimized the fraud recipe for a home lender.  As Tom Miller, the Nation’s longest serving state attorney general testified to the Fed a year before the acute phase of the crisis began:

“[Many originators invent] non-existent occupations or income sources, or simply inflat[e] income totals to support loan applications. Importantly, our investigations have found that most stated income fraud occurs at the suggestion and direction of the loan originator, not the consumer.”

The WSJ must think a 5.56mm NATO round is “abused” when it enters into a human body at supersonic speeds and is deformed by striking bone and tissue.  The American people, and that includes the borrowers, were “abused” by liar’s loans.  The banksters were made rich by liar’s loans.  Liar’s loans are designed by the lenders’ CEOs to be fraudulent.

“Alt-A” is a double lie.  “Alt” stands for “alternative” and “A” means “prime” quality loan – an ultra-low credit risk home mortgage loan.  Taken together, the claim was that the lender used an “alternative” underwriting process that ensured that the loans made were ultra-low credit risk.  Unless you think “not underwriting” one of the essential “4 Cs” of prudent lending (Capacity) is an “alternative” means of underwriting you know that word is a lie.  As even the WSJ admits “Alt-A” loans had, by 2010, a 90+ day delinquency rate of “26%.”  They were slime, not prime.  The industry deliberately creates these lies to help them deceive customers, regulators, and others. 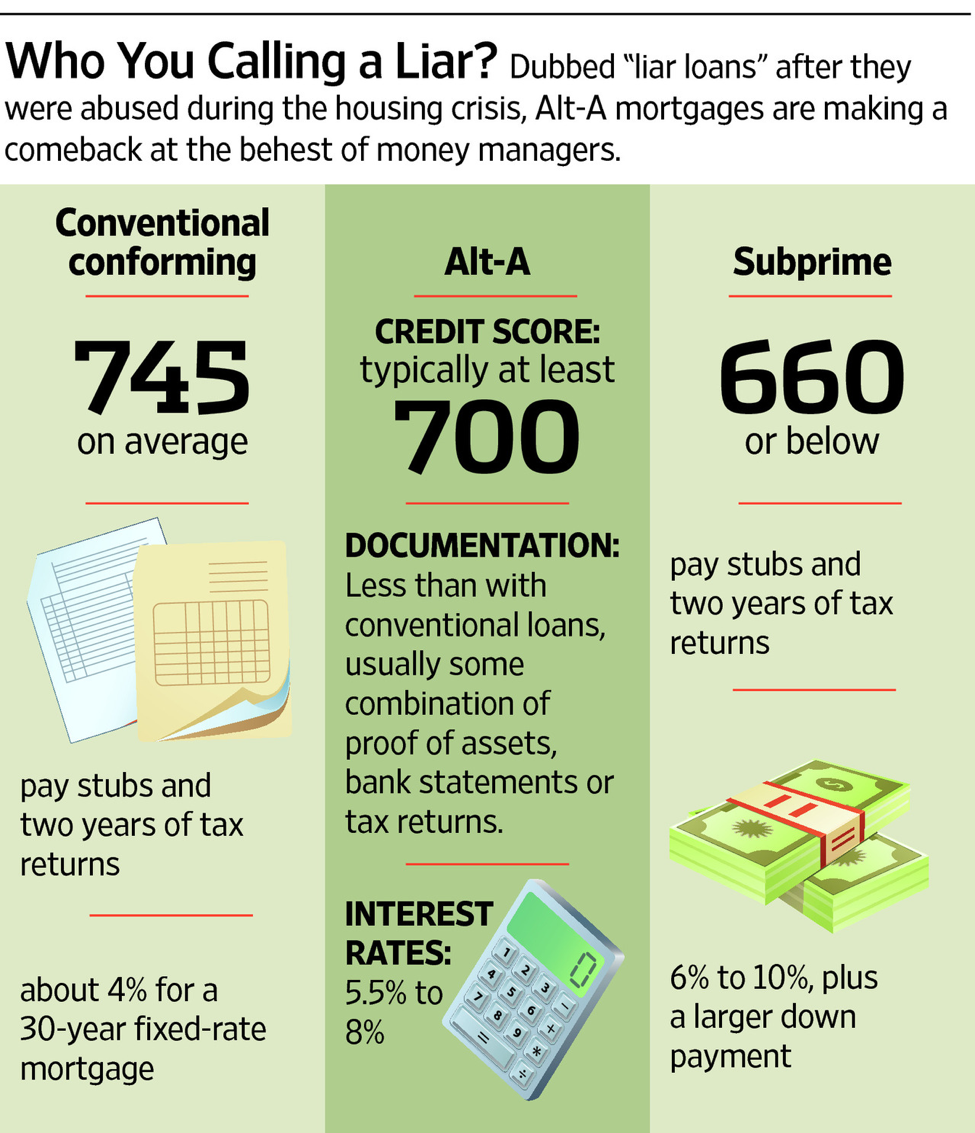 Lies 6-9: The chart separates liar’s loans and subprime – creating the sixth lie that the two categories are mutually exclusive.  It then commits the seventh and eighth lies by purporting that subprime required and requires verification of the borrower’s income through “pay stubs and two years of tax returns” while liar’s loans purportedly required and require verification through “some combination of proof of assets, bank statements or tax returns.”  It was, in reality, common to lend to borrowers with subprime credit scores without “pay stubs” or “tax returns.”  By 2006, roughly half of all subprime loans were also liar’s loans.

The claim as to how liar’s loans were and are “documented” is more disingenuous.  The reader is never told of the “4 Cs” required for prudent real estate lending, which lets the industry and the reporter to play fast and loose with the entire concept of underwriting.  Note that the word “or” is used rather than “and” – “some combination of proof of assets, bank statements, or tax returns.”  These forms of documentation, given the use of the word “or” are inherently vague, but they are also deceptive because they are not nearly equivalent and only documentation of income was in fact virtually never used.

“Proof of assets” and “bank statements,” like credit scores, are inherently incapable of answering the question (for any but the wealthiest few percent) of whether the borrower has the capacity to repay the loan – which requires verifying the borrower’s income, assets, and debts and other liabilities.  Only “tax returns” can be used to verify the borrower’s income.  But the purpose of liar’s loans is to inflate the borrower’s income, so the CEO of the lender is not about to verity the borrower’s income through checking his tax returns.  To create the appearance of prudence, lenders on liar’s loans routinely required borrowers to sign IRS 4506-T consents allowing the lender (and any purchasers of the loan) to obtain a “transcript” of the borrower’s last two years of tax returns.  (A transcript has all the key information boiled down.)  But lenders, and purchasers, virtually never used these consents – even after they were put on notice that the fraud incidence on liar’s loans was 90 percent.  Indeed, I do not know of any case where lenders verified the income reported on a sample of liar’s loans applications prior to funding them.  Even after making the liar’s loans and knowing about the 90% fraud incidence I know of only one case, Countrywide, where the lender made an ex post review of a sample of liar’s loans that they had funded.  Countrywide’s study confirmed that the loans were riddled with fraud – and Countrywide’s leaders responded by adopting what they called an “Extreme Alt-A” program modeled after Bear’s to dramatically increase the amount of fraudulent loans it made.

I have discovered even more amazing indicators of fraud in my pro bono efforts on behalf of alleged fraud “mice.”  One of the largest home lenders in America ordered its staff – in a passage that they put in all-caps to highlight its importance – never to verify the borrower’s income on liar’s loans even when the underwriters could have done so without any expense.  In particular, while the underwriter was permitted to call the employer and verify the borrower’s employment, the underwriters were forbidden to verify the borrower’s income even though they had the boss on the phone line staring at the employee’s records.  Everything about liar’s loans screams “accounting control fraud” by the lenders’ controlling officers.

The chart also prompts critical questions missed by the reporter.  It says that a borrower with a high credit score could get a prudently underwritten loan for 4 percent, but will pay 5.5 to 8% for borrowing the same amount of money through a liar’s loan.  This raises three critical analytical points.  One, the spread is sufficiently large over prudent lending that the attraction of the officers that run “big money managers” to make large numbers of fraudulent liar’s loan is shown by the fraud “recipe.”  Two, why is a borrower willing to pay up to double the market rate (4% v. 8%) to borrow through a liar’s loan?  Any honest borrower, even if self-employed, has the ready alternative of using his tax returns to verify her income – and save up to 400 basis points on her loan.  There are two obvious answers, and they are not mutually exclusive.  The borrower is the subject of predation by the lender and its agents.  The borrower may be unwilling to provide her tax returns because they show that she has been deceiving the IRS or a former spouse.  (One of the other 4 Cs that we underwrite to make prudent loans is “Character.”  Three, why is the spread so variable?  Who is being charged “8%” and who is being charged “5.5” percent?  Does it depend on race, ethnicity, or gender?  The WSJ doesn’t seem to be interested.

The lie that liar’s loans and subprime loans are mutually exclusive categories is one of the most damaging lies of the crisis, for it has done more than any other lie to deceive the public about the paramount cause of the crisis.  To understand that point the reader needs to know about a more subtle lie by the industry, one that the WSJ parrots.  The goal is to shift the blame to the home buyer, particularly poorer home buyers, and most particularly minorities.  The goal is to shift the policy blame to “liberals” and “government.”  Liar’s loans pose an insuperable barrier to any effort to blame the clever hair dresser (or exotic dancer in “The Big Short”) who is purportedly too smart for poor Bear and Lehman to defend against.  No government entity ever encouraged liar’s loans.  Even under Bush’s “Wrecking Crew” (Tom Frank’s title and book), the government regulators repeatedly discouraged liar’s loans.

The WSJ article conflates throughout “Alt-A” and “liar’s loans.”  That is a lie.  While the vast bulk of “Alt-A” loans were liar’s loans (ultimately, around 90%), “liar’s loans” were a far larger category that included “subprime” and supposedly “conventional” prime loans.  By 2006, roughly half of all the loans that the industry called “subprime” were also “liar’s loans.”  There is nothing mutually exclusive about “subprime” and “liar’s loans” – lenders loaned to borrowers with very poor credit histories without verifying their income.  Doing so is perfectly sensible for fraudulent lenders following the fraud “recipe.”  For any honest lender, of course, it was facially insane.

This entry was posted in William K. Black and tagged banksters, liars loans. Bookmark the permalink.

4 responses to “How Many Lies Can the WSJ Pack into a Chart on Liar’s Loans?”