The Debt Pyramid and Clearing: Responses to MMP Blog #15

This week we examine the debt pyramid and clearing of IOUs in the state money of account. Thank you for your questions and comments, and apologies for being late with the response (believe it or not, I lost track of the days of the week—thought I had another 12 hours to get this done).

Q: (Douwe): Please explain the “degree of separation from the CB”.

GA: Thanks for the nice comment. See the pyramid below. Obviously this is a simplified picture of the hierarchy. Within government IOUs we include the Treasury and the Fed. Bank IOUs include demand deposits and other liabilities that banks promise to convert to government IOUs. 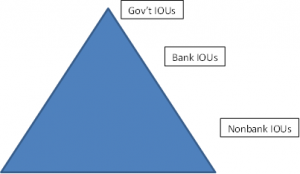 Nonbank IOUs are issued by firms and households; it is rather arbitrary where we put the dividing line between bank IOUs and IOUs of “other” financial institutions. Perhaps the most useful way is to distinguish between those types that have direct access to the central bank, and those that do not.

That also brings up the point made by RVAUCBNS: what happens if something goes wrong at the bottom of the pyramid (say, in the shadow banks)? Yes, and that is indeed what happened in the global financial crisis (GFC). Typically those lower in the pyramid issue IOUs that are convertible on some conditions to bank IOUs, that in turn are convertible to government (central bank reserve) IOUs. When something goes wrong, the nonbanks turn to banks for finance (lending against the nonbank’s IOUs); the banks in turn go to the CB. But when expectations turn ugly, the banks won’t lend so the nonbanks cannot make good on promises. That led to the liquidity crisis; the Fed eventually decided to lend to everyone, including the Real Housewives of Wall Street (as Matt Taibi demonstrated).

Additionally, the pyramid is useful for thinking about whose IOUs one can use to make payments on one’s own IOUs. You cannot repay your IOU with your own IOU (you’d still owe); only sovereign government can do that (as we discussed, if you present a five pound note to the Queen, she gives you another; she still owes, but so what—you’ll never get anything else out of her even if you go to court). You use someone else’s—what we call a second party or third party IOU (not first, which is yours; second would be using your creditor’s own IOU; third would be using the IOU of someone unrelated). Normally those lower in the pyramid use bank IOUs; banks in turn use government IOUs (CB reserves).

Jim wondered about power in the structure. Certainly! I’d love to be at the top of that pyramid! Even being at the bank level is a nice gig: government would stand behind your IOUs so they’d be as good as government’s. Gee, do you think your IOUs would then be widely accepted? Yes. When government handed a bank charter over to Government Sachs (oh, whoops, Goldman Sachs), suddenly its IOUs were as good as the Fed’s. Led to a huge multi-billion dollar subsidy. On the other hand, that comes with tighter regulations and supervision (at least, it is supposed to do so). Jim also wondered about the “flatness” of the pyramid—a good point. The pyramid is bigger at the bottom for a reason: more IOUs issued at the bottom than at the top. We can think of that as a more sophisticated financial system. And generally that is true—in developed economies government IOUs (including cash) are a smaller portion of the whole. Since the US Dollar is used all over the world to finance illegal activities, there are more of them sloshing about than you’d expect for a highly developed financial system. And now after QE, we’ve got a lot more bank reserves (at the top of the pyramid) than usual.

Q2: (Jeff) What about settlement of Eurodollars?

A: Same story. Ultimate clearing is at the Fed since these “leverage” US Dollars. (Note: there are also private settlement services—I am simplifying. Banks with off-setting claims on one another can use a private settlement system; they only need to go to the central bank for net clearing, as only the CB can create reserves.)

A: Yes. This is part of the operating procedures to ensure the Treasury can get deposits as needed and move them to the Fed to cut checks or credit accounts as needed.

Q4: (Dave) Techie question about complications in Fed lender of last resort operations. Scott Fullwiler answered—and there is no way I can improve on Scott’s paper since he is the numero uno expert. Those who are really wonkie can go to his paper—it is far too complex for this primer.

Q5: (Glenn) Didn’t Chairman Bernanke admit he bailed out the banks with keystrokes? Where does the Fed borrow from and is there a limit? And wouldn’t it be better to spend the money to bail-out Main Street?

A: Yep. Fed “keystroked” trillions of reserves into existence, buying Treasuries and toxic waste MBSs. Calling this “borrowing” is misleading, which is why I do not use that term. Yes, the Fed is indebted, dollar for dollar, for every one of those keystrokes. Reserves are Fed IOUs. So you could call that “borrowing” and the banks with the reserves could be called “lenders” since they are the creditors. But this is nothing like you or me borrowing to buy a car. We are truly limited in how much we can borrow. The Fed has no limit to keystrokes (unless Ron Paul finally gets Congress to put a limit on the Fed—in other words, self-imposed limits are always possible).

The Fed and Treasury spent, lent, and guaranteed $29 trillion to rescue the banksters. Wouldn’t it be better to spend a fraction of that to rescue Main Street and the unemployed? I think so. Probably 99% of Americans would agree. Unfortunately we do not control the Fed and Treasury.

Q6: (Godefroy) What is inside bank assets? (RVAUCBNS) Aren’t there two kinds of money? Government and bank.

A: I think you mean what is on the asset side of a bank balance sheet. Reserves (electronic entries on the liability side of the CB), treasuries, private bonds and securities, loans, and a tiny bit of vault cash.

Two kinds of money: yes, two main categories. Inside money is the money-denominated IOUs of the nongovernment sector. What I called private money things. Outside money is the money-denominated IOUs of the government sector (cash plus reserves; we can also include treasuries since those are just reserves that pay higher interest). Note it is outside money that is at the top of the pyramid.

Thanks, again. Sorry for being a bit late and a bit brief.