Can we spend our way out of the recession? Is the fiscal deficit unsustainable? And is it time to cut government spending?

If the reader is familiar with history, she or he will note a close similarity between the current policy debates and those of the 1930s; the latest similarity is the proposed spending freeze by the Obama Administration. In the early 1930s, President Roosevelt first criticized President Hoover for engaging in deficit spending and driving the country down the road to ruin, and then proceeded to implement policies that further increased the fiscal deficit of the federal government to about 5% of GDP (a historical record at that time). These policies greatly helped the economy to get out of the Great Depression, but were the subject of ferocious attacks on the ground that the “massive” deficits would lead to the insolvency of the country, uncontrollable inflation, wasteful spending, the taking over of the economy by the government, and, ultimately, the rise of Communism. A cartoon in the Chicago Tribune says it all. Those criticisms were so ferocious and effective at frightening the population that Roosevelt decided to return to a balance budget during the election year of 1936, just like President Obama wants to do.
Did any of those problems actually materialize? As the saying goes “the proof is in the pudding.” There was no government takeover, no rise of Communism, and no insolvency. In fact, Roosevelt proceeded to increase government deficit over 20% of GDP during WWII without any of those problems arising. The non-sense about insolvency and government takeover of the economy have been explained elsewhere on this blog (here and here) and on Bill Mitchell’s blog and no additional time needs to be devoted to that subject. Instead, let us see what the actual consequences of rising federal government deficit (current government outlays minus current government receipts) and rising public debt (the sum of all past and current federal government deficits and surpluses) were.

Staying in the pre-WWII period, unemployment went down steeply to about 10% of the economy, once one removes people employed by government programs from the unemployment data. Even if one just follows the official BLS data (the gray line in Figure 1), unemployment rate was down to 15%. Far from great but much better than 25%. Unemployment would have declined much further if Roosevelt had let the government spending grow. However, political pressures pushed him to limit government spending and government deficit and to actually reduce them massively. This generated a recession in 1937, followed by rising unemployment. 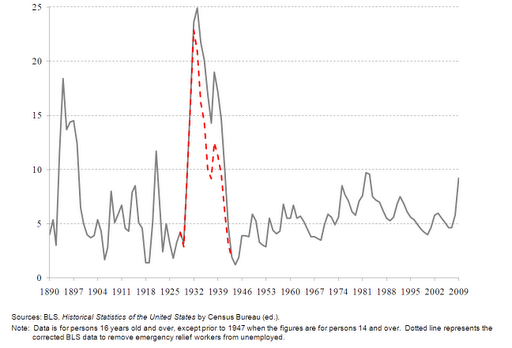 The main argument used for counting people employed by the CCC, WPA and other government programs as unemployed, is that those jobs were makeshift jobs not driven by the needs of the private sector. They were wasteful employment not justified by the profit motive. However, while they probably were not profitable, they were extremely beneficial for the welfare of the US population and provided the foundation for the long period of stability after WWII. Here are some of the achievements through June 1940, 3 years before most employment programs ended (NRPB is the National Resources Planning Board’s Security Work and Relief Policy):

National Youth Administration (NYA)
“Through June 30, 1940, the accomplishments of youth workers on the out-of-school program had included the following: New construction or additions to more than 6,000 public buildings, such as schools, libraries, gymnasiums, and hospitals, and addition to or repair or improvement of about 18,300 others; construction of almost 4,000 recreational structures, such as stadiums, bandstands, and park shelters, and repair or improvement of nearly 6,000 others; construction of 350 swimming or wading pools and 3,500 tennis courts. About 1,500 miles of roads had been constructed and 7,000 repaired or improved; nearly 2,000 bridges had been built. Seven landing fields had been constructed at airports. 188 miles of sewer and water lines had been laid, and 6,200 sanitary privies built. Over 6.5 million articles of clothing had been produced or renovated, nearly 2 million articles of furniture constructed or repaired, and 350,000 tools or other mechanical equipment constructed or repaired. 77.5 million school lunches had been served by NYA youth; nearly 4 million pounds of foodstuffs had been produced and nearly 7 million pounds canned or preserved. Conservation activities had included the construction or repair of 127 miles of levees and retaining walls and 15,700 check and storage dams.” (NRPB 1942: 342, n.5)

Civilian Conservation Corps (CCC)
“Through June 30, 1940, the accomplishments on these [CCC] projects included: The construction of 37,203 vehicle bridges, 21,684,898 rods of fence, and 79,538 mileage of telephone lines; the development of almost 21,000 springs waterhole, and small reservoirs; the building of more than 5 million permanent and temporary check dams in connection with treating gullies for erosion control; as well as the planting, seeding, or sodding of 114 million square yards of terraces for protection against erosion; the planting or seeding of almost 2,000,000 acres of forest land with an average of 1,000 trees to the acre; 5,741,000 man-days spent in fighting forest fires and 5,392,000 man-days in fire presuppression and prevention work; forest-stand improvement on 3,694,930 acres; development of about 55,000 acres of public camp and picnic grounds; stocking lakes, ponds, and streams with 9.3 million fish.” (NRPB 1942: 343, n.8)

The overall cost of running those programs was extremely small, less than 1% of GDP. Despite their limited scope, they helped millions of people to make a living, helped to avoid waste of resources (if they had been left idle), and promoted the growth of U.S. infrastructures. In addition, the large deficit spending flooded the private sector with cash; thereby, restoring profitability and willingness to employ. War deficit spending reinforced this trend by flushing banks and private businesses with money and by creating a long period of financial stability. All this without any sign of insolvency of the federal government.

A final complaint is usually that government deficit always creates huge inflation and even hyperinflation. There is here a ton of data going against this argument. One just needs to look at Japan over the past 20 years: massive debt, very low interest rate, deflation or stable prices. But we do not have to go that far. Here is the United States, the “massive” deficits of the 1930s and 1940s did not generate high inflation.

Figure 2. Annual CPI Growth in the US. 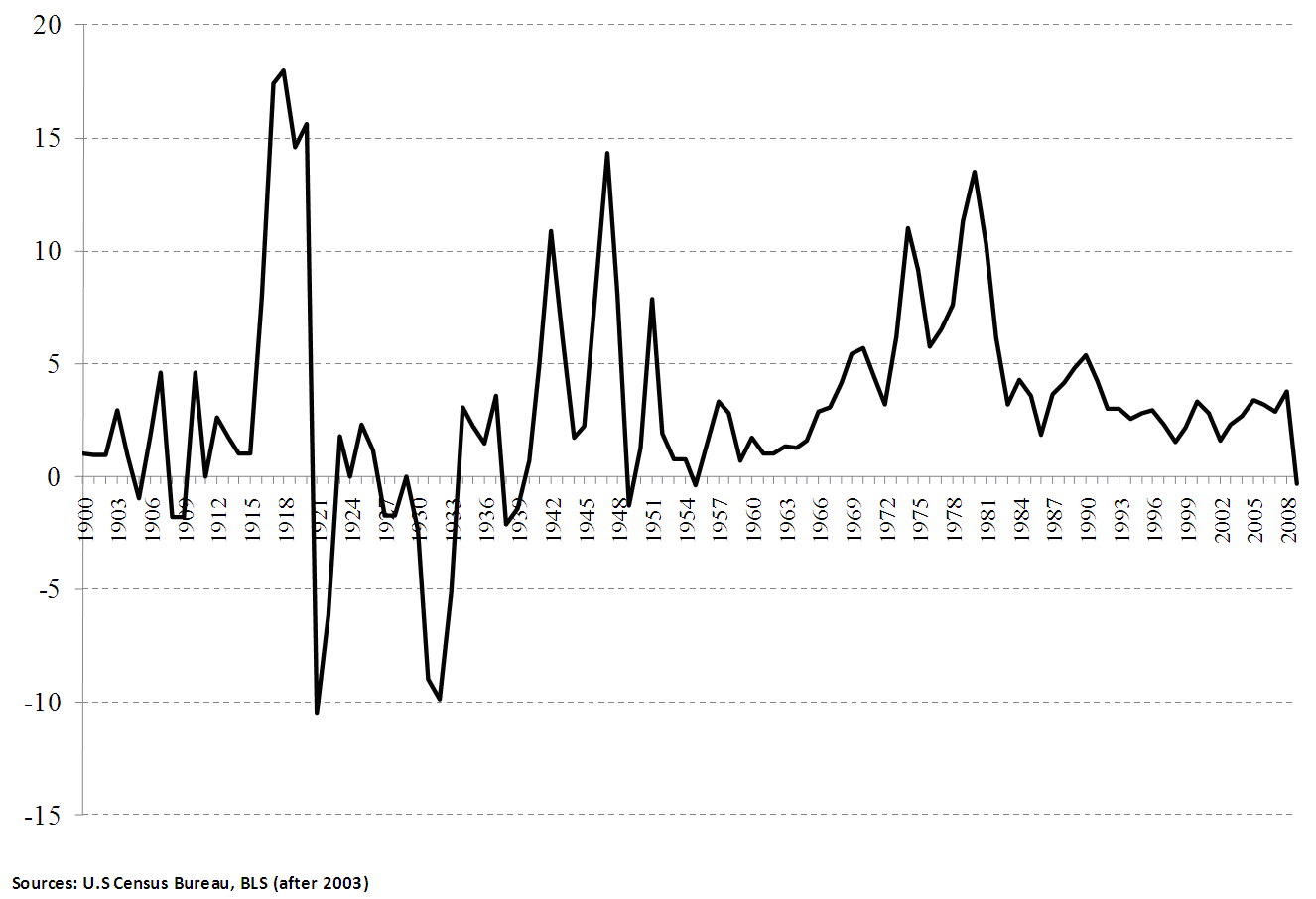 In the 1930s, inflation stayed moderate at about 3%, after WWII inflation did spike to 15% for one year but that was it. And this spike is explained by the disturbances in the production system induced by WWII. After the production capacities were reoriented toward meeting the demands of a peaceful economy, inflation declined tremendously even though public debt was still very high relative to GDP. Today for the first time since 1955, the US economy experienced deflation despite rapidly rising deficits. Thus, there is no automatic relationship between government spending and inflation. It all depends on the state of the economy. If the economy is at full employment, any type of spending (private domestic consumption, private domestic investment, exports, and government spending) leads to inflation. If production capacities are underemployed, as they are today, companies can meet all the additional private or public demand without increasing their prices.

So can we spend our way out of a recession? Yes we can; provided that spending is high enough. Will a sovereign government go bankrupt by doing so? No, it will not. Does government spending lead to inflation? No, it does not. Does bigger government spending mean that the government will take over the economy? No, it does not. Does it mean that all types of spending are equally beneficial? Definitely not. Government spending can be wasteful if there is no improvement in the welfare of society through infrastructure spending, better social programs, and other government spending, preferably employment-enhancing, that improve the standard of living of the population. That is the major critique that one can make about the Obama administration under the guidance of Geithner and Summers. Far too much money was spent on wasteful financial rescues and far too few dollars were used for the benefits of the overall population. The clear example of this is that, while unemployment as leveled off it has not declined significantly. Even more telling is what has happened to the employment-population ratio. The latter has been dropping so much that all the gains of the past 25 years have been eliminated. 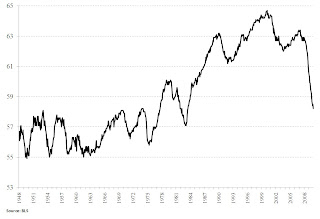 We need a second “stimulus.” Even better, we need a permanent employment policy that provides a buffer against unemployment through employment-government programs. Those who promote small government do so on the basis of a value system, not on the basis of sound economic arguments or historical data. Unfortunately, this value system is highly dangerous for the well-being of the U.S. population. The alternative is not government takeover but rather using the government in a productive fashion to improve economic well being. Make your voice heard, not just by hanging passively signs in the streets and going to vote, but through massive organized protests and, if necessary, strikes. This is how a healthy democracy works. This is what happens all the time in other democratic countries and this is what this country did in the 1930s with the Bonus Marchers, industrial strikes, and the peasant movements. Want a few ideas to fight for? What about increasing healthcare benefits, eliminating the payroll tax, engaging in massive green infrastructure programs, providing free education in the fields in need (definitely not finance)? Those were the sort of commitments made during the 1930s and they have been hugely popular among the U.S. population, have contributed to the rise of US economic power, and have not affected at all the solvency of the United States. Again the proof is in the pudding: just look at the popularity of Medicare, Social Security, the air transportation system, the highway system and many other achievements of the New Deal and post-WWII policies.

3 responses to “Can we spend our way out of the recession? Is the fiscal deficit unsustainable? And is it time to cut government spending?”