Sectoral Balances within the Domestic Non-Government

There are many important laws that determine the behavior of various systems within the Universe but as far as economics is concerned, none is more important than the concept of a closed system.

What does this mean in the context of a monetary economy? What could properties of a physical system have in common with a system based largely on the relationships between stocks and the flows between them? It turns out that some math systems behave according to the same rules that constrain elemental physical particles, i.e. the concept of the conservation of matter holds mathematically for the “conservation” of currency units within the system.

If we define the closed system as the universe of state-backed US dollar assets and liabilities, including state-issued bonds held by the public, it means that the net dollar assets existing in the economic system cannot change over some period of time t without an add or subtract from a source external to the system.

The graphic below illustrates a circuit composed of a collection of closed systems within the (I-S) component of the sectoral balances identity. It is defined to highlight net flows between selected groups within the domestic non-government under certain assumptions. The arrows represent the net flows. Flows move in both directions but only net flows are illustrated. Flows are measured over some time period t, usually a year. The circuit as defined accounts for the bulk of transactions that occur within the economy important to the financial well-being of the majority of participants.

The model is based on the following assumptions:

Let x = total business investment spending over period t.
p = net profit over the period as the difference between Sales and Investment.
i = interest on household debt accrued in the system over the period.
(x+p) = total sales revenue collected by businesses over the period.

The assumptions and assignments above are the most conservative possible, any real-world conditions would increase the requirement of net government spending. 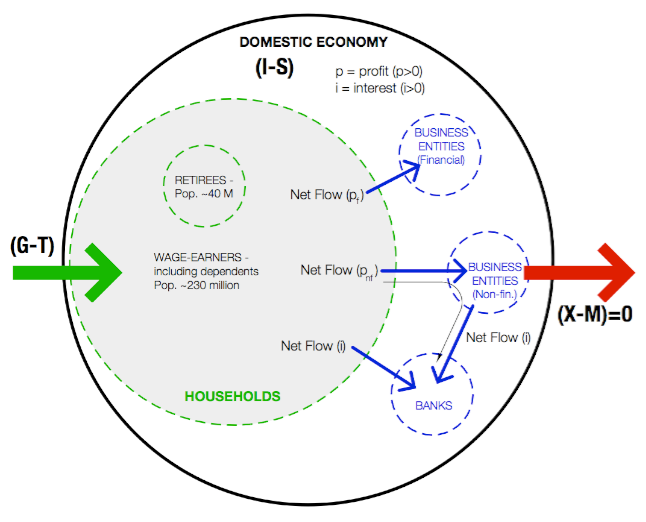 If (G-T)=0, p>0 is a closed system violation (which is impossible). Business entities are attempting to create net flow between some level of investment (x) and some level of sales revenue (x+p). Since households contain only x after the investment not accounting for net savings, which would require prior net (G-T > 0), it is only possible for business entities to extract x in sales. Thus, p>0 is only possible if (G-T) > 0 or the funds required are obtained through the issuance of private debt.
There is a point of view that an economy can operate in a steady state on private debt alone without deficit spending. Let’s take a look. 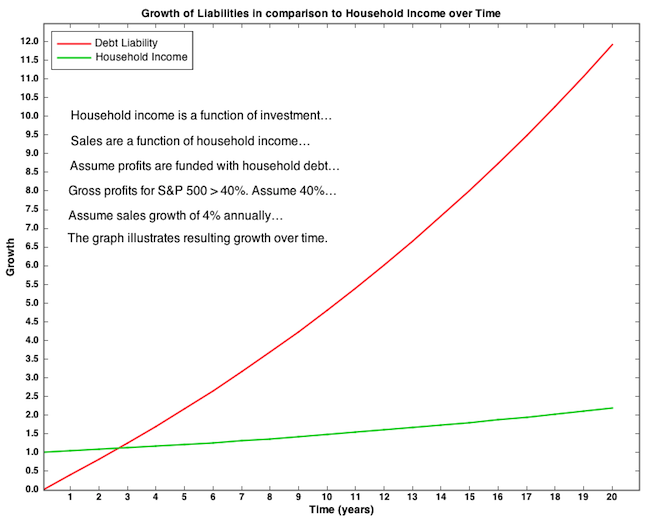 Why do the liabilities accrue so fast? For one thing, no amount of borrowing can eliminate the liabilities previously existing. This is a consequence of the nature of debt – it is “money” issued as an asset with an equal offsetting liability that nets to zero on individual balance sheets and on all balance sheets in the aggregate. Increasing debt merely adds to the balance accruing interest. The graph illustrates growth in the principal portion only, not including interest, which would make matters worse (and the computation more complicated).

Households ultimately pay for all principal and accrued interest from private debt in the system, either directly as a result of consumer debt or indirectly as a result of business debt costs having been rolled into the price of products they consume.
The purpose of this exercise was to demonstrate that no series of transactions within a closed system is capable of generating net nominal growth, even through ever-expanding debt. Nominal growth can only occur as a result of net government spending.
This is presented as a general argument, and is not intended to be a rigorous mathematical proof, which it is not. It is an attempt to illustrate the general relationships between the main sector flows within the domestic economy…which is a closed system.

This entry was posted in Guest Blogger and tagged closed systems, sectoral balances. Bookmark the permalink.

32 responses to “Sectoral Balances within the Domestic Non-Government”