During the run-up to passage of the Affordable Care Act (ACA), I wrote a number of posts here, here, and here assessing the ACA very negatively, and pointing out the shortcomings of the various versions of this bill, preceding its final passage. My focus was on contrasting varying versions with HR 676, the Conyers-Kucinich Medicare for All bill, in relation to its likely impact on fatalities, bankruptcies and divorces attributed to lack of health insurance coverage in the US.

At that time, about 47 million people were uninsured, and based on the rate of 1,000 fatalities per million established by the Wolper-Woolhandler-Himmelstein et al study of 2007-2009, I anticipated 47,000 fatalities in 2010.  In addition, I predicted that

— In the “band-aid” period before the health insurance exchanges became operational in 2014 we were still looking at an average of 31,000 fatalities per year due to lack of insurance, or a total of about 140,000 expected fatalities before the exchanges would be effective sometime in 2014.

— The bill will not cover 30 million additional people, as claimed by its advocates, but more like 15 million due to rising insurance costs and un-indexed subsidies in the ACA.

— In addition, due to population growth, we would still be looking at 35 million uncovered and 35,000 fatalities due to lack of coverage.

Now 2.6 years have passed since I made those predictions, and the Commonwealth Fund has just released a new study of the ACA. The study projects what we can expect from ACA coverage compared to what we can expect from a baseline do nothing scenario and from Mitt Romney’s latest pronouncements about his health care plan, which, in all likelihood will be obsolete before election day.

The projections are based on Jonathan Gruber’s simulation model. Gruber was a consultant whose ideas were incorporated both into Romneycare in Massachusetts and the ACA at the national level. Gruber’s model isn’t something one can count on in my view, if only because long-term economic projection models using CBO-like methodologies are subject to accumulating errors over time as well as wide deviations from their policy assumptions in reality. Decade long projections are particularly likely to be science fiction rather than science.

Having said that, however, it’s still worthwhile to use Gruber’s projections as a basis for comparison of the various scenarios, simply because they are likely to under-estimate the rate of coverage, as well as the level of projected fatalities, over time. We can be pretty confident, for example that if Gruber’s model projects 286,000 fatalities over a particular period of time; then actual fatalities will be at least that high.

Here’s a Table I constructed using data from the study. There are four scenarios compared in the Table: The ACA, the Romney Plan as described on his web site, http://www.mittromney.com/forms/welcome-0  a baseline scenario assuming that the ACA wasn’t implemented, and a final scenario assuming that HR 676, Medicare for All, had been passed by June of 2009 either through Democrats  forgetting bipartisanship and using reconciliation, or the Constitutional Option to overcome the Senate filibuster. The Commonwealth Fund doesn’t include this scenario; but I think it needs to be included in any comparison to indicate what might have happened if the President and Congress had wanted to solve the most serious consequence of maintaining the private health industry, rather than simply put a band-aid on the health insurance problem while bailing out the health insurance companies. 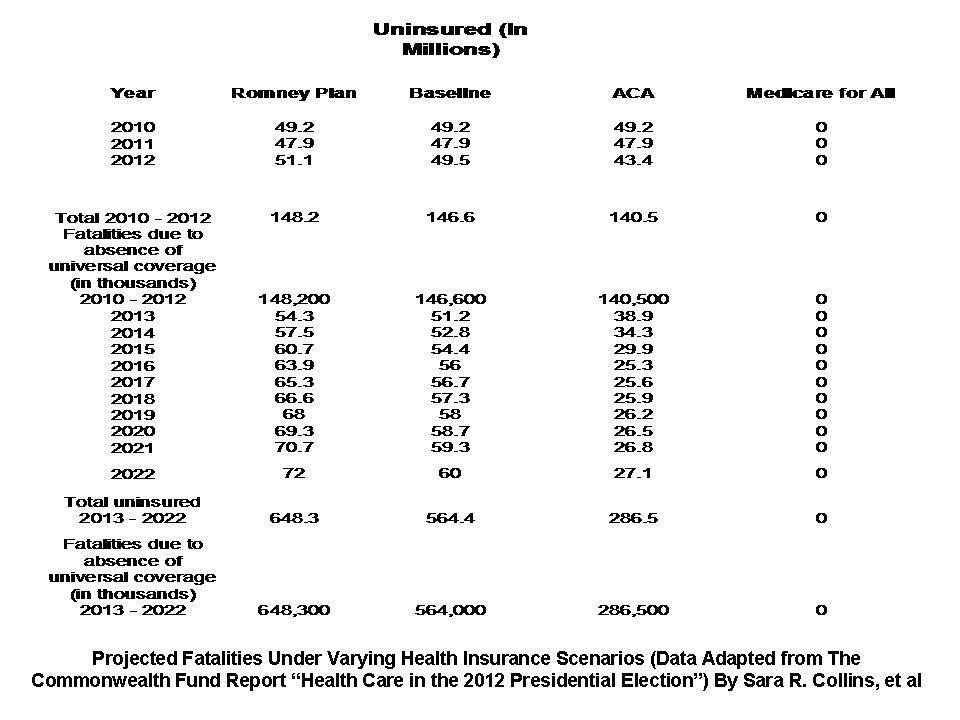 Let’s begin by looking at the first three years 2010 – 2012. Think about the numbers for a minute. It’s nearly three years since a Medicare for All Bill might have gone into effect. If we were living under the Romney Plan, roughly 148,200 people would have died. Under the baseline of no legislation at all, the fatalities would have been slightly lower at 146,600, and under the ACA we’ve had nearly 140,500 fatalities. The ACA is slightly better than the other two alternatives; but the conclusion that jumps out at one is that the failure to pass and implement Medicare for All has cost at least 140,000 lives in three years, or 47 times the number of lives lost on September 11, and about 14.6 times the number of fatalities on 9/11, during the Iraq War, and in Afghanistan up to the present, combined. I’ll return to this point later.

The years between 2013 and 2022 show a marked divergence of the uninsured estimates among the Romney, ACA, and benchmark scenarios. The ACA saves hundreds of thousands of lives compared with the benchmark and Romney scenarios; but it still projects an additional 286,000 fatalities through 2022 under the ACA scenario, and a total of 427,000 fatalities from 2010 through 2022. This compares to nearly 800,000 under the Romney scenario and just over 700,000 for the no change benchmark. Certainly, the ACA is much better than the Benchmark or Romney alternatives, but it’s hard to avoid noting that the most striking comparison is between any of these three alternatives, and the Medicare for All alternative. Had that alternative been legislated in 2009 and implemented by January of 2010, we’d be looking at virtually no fatalities due to lack of insurance rather than 400,000 or 700,000, or 800,000. Since The Commonwealth Fund Report excludes the Medicare for All alternative from consideration, and in doing so, moves the Overton Window of its policy impact evaluation to the Right, it doesn’t bring the real cost of legislating the ACA option to the fore. That cost, based on Gruber’s simulation is 427,000 lives over the time horizon ending in 2022.

What Was the Justification for Accepting the Cost of Those Lives?

There are a lot of reasons, motivations, and political dynamics which together explain why the ACA, rather than HR 676 passed the Congress. I’ve written a lot about these in the past and have imputed corrupt motives to various people involved in the legislative process producing the ACA often enough. But apart from all this, there is the question of justification or rationalization, of why Medicare for All could be so quickly and easily taken off the table without a major fight from the progressives?

Part of the reason was the promise of Administration support for the public option sparkle pony, as it came to be called in some of the more cynical progressive circles. The PO idea split progressives and stripped away support of DC-based progressive organizations from Medicare for All, on grounds that the PO was a more politically “realistic” alternative than Medicare for All. That is a sad story that has been told very often. But looking past it; what was unrealistic about Medicare for All, the type of system that has been successful in providing coverage and lowering costs in so many nations?

A Medicare for All Act would have required Federal spending on health care to rise by $800 – $900 Billion per year over present levels. They were not ready to cover that with higher tax revenues, and they were not ready to deficit spend it because they viewed that as fiscally irresponsible, and believed then and still believe now that it’s necessary to decrease the debt-to-GDP ratio over time.

So, they wouldn’t consider spending for Medicare for All. They wouldn’t look seriously at the hundreds of thousands of lives they were consigning to oblivion, at the bankruptcies and divorces they could prevent, or at the obvious fact that while HR 676 would have cost the Government $900 Billion more in money annually that the Government can create at will and at zero real cost; it would have saved the people who have to pay for health insurance, and health care out of pocket and in the form of “co-pays” $1.8 Trillion annually, thus providing a marvelous boost to the economy. Instead, they just said to everybody, that it was impractical and that the United States couldn’t afford it; but that it would be able to to afford a self-supporting PO bill, and later when that was taken off the table, a deficit neutral insurance bailout like the ACA.

So, here we are at the denouement, neoliberalism, and other false social and economic theories, kill. In this case, belief in neoliberalism has already killed approximately 140,000 Americans since the beginning of 2010. And if we don’t reject it, over the next decade it will kill 286,000 more, more than 2/3 the number of US fatalities during WW II. And these are only the fatalities resulting from a refusal to deficit spend to pass Medicare for All.

In addition, there are also the fatalities resulting from our collective failure to end the joblessness, the crime, the reactions to family breakup, the social disintegration, and the climate change and environmental effects, and all the other serious problems we refuse to solve because we and our leaders have been captured by neoliberalism and its false notions about fiscal responsibility and fiscal sustainability. We have reached the point, now, where it is neoliberalism or American Democracy, or, if you like neoliberalism or us. There is no alternative! Neoliberalism is one of our worst ideas. And as Popper said, life is about killing your worst ideas before they kill you. So, it’s time for us to free ourselves of neoliberalism,  switch to a paradigm that works, and get full employment, Medicare for All, and much else. That paradigm is called New Economic Perspectives Modern Money Theory.

17 responses to “Neoliberalism Kills: Part One”