Posted on February 3, 2012 by admin | Comments Off on US Employment Growth Shows Fiscal Policy Matters

US Q4 2011 GDP growth was slightly disappointing, and the mix was terrible as the growth was mostly due to inventories. I took issue with that report, arguing that the weakness was due to statistical distortions in the government spending data and the PCE services data. With that disappointing Q4 GDP report, expectations for quite weak economic growth in this year’s first half were encouraged.

But today’s employment data blows the weak consensus outlook out of the water. The economy created jobs at the fastest pace in nine months in January and the unemployment rate dropped to a near three-year low of 8.3 percent, indicating last quarter’s growth carried into early 2012.

Nonfarm payrolls jumped 243,000, the Labor Department said on Friday, the most since April and beating economists’ expectations for a gain of only 150,000.

Economists had expected the jobless rate to hold steady at 8.5 percent. The rate has dropped 0.8 percentage point since August.

This was WAY above consensus, as many analysts were expecting a downward statistical distortion in the payroll number for January.

I have been making a big deal about strength in the household series of employment and the trend in IUCs. These are statistical series that do not get revised out of recognition. They often tell the tale at turning points. Given that past household survey employment and IUC trends have persisted, the current bond market rally will be even more insane and the stock market will probably continue to work higher, even though the favorable seasonable window has closed. I expect the recent trend of large outflows from stocks to bonds over the last year (and last five years) to be reversed in 2012. Not only are interest rates at generational lows but many high-quality companies are yielding (at 2.5% or even better) well above the yield on the 10-year U.S. note.

Speaking of the latter, the 10-year Treasury yield at a mere 1.8%, real Treasury interest rates are negative well out the maturity spectrum based on all surveys of long-term inflation expectations. The potential for capital loss if the economy achieves above-trend economic growth is simply huge. Remember, the Fed is targeting 5% nominal GDP growth (better than 3% real growth and almost 2% inflation). Historically, the 10-year yield is equal on average to nominal GDP growth.

The current insane safe haven bid for bonds assumes that, despite QE, ZIRP, 10% M2 growth, 5% M3 growth, and 5% credit growth, the Fed will not achieve its nominal GDP growth target. If the Fed does succeed and Treasury yields move only part way back to their historical relationship to nominal GDP growth, capital losses in Treasury bonds from today’s levels could be very great. As Doug Kass has argued, de-risking and flight to safety in bonds by all three dominant investor classes help to explain the last five years of action in domestic equities and the contraction in P/E ratios in 2011.

Why has the US done better than expected? Simple: that horrible US government deficit! While there has been austerity rhetoric in the US, which has probably held back private spending, the unresolved nature of the current political impasse has not translated into any significant budget cuts to date. The current US regime is still talking job creation and growth, which is far removed from the rhetoric that emerges from the governments of Europe and now Canada.

In fact, armed with a new majority in Canada, the Harper Administration is embracing the austerity theme of his British Tory counterparts, and this is starting to be manifested in the data. In contrast to the US, in Canada, the unemployment rate has gone up, with unemployment rising to an 8-month high of 7.6% (from 7.5%).

But that’s OK, as we’re always being told how great the Canadian banking system is!

As my friend Warren Mosler suggested, that’s a bit like talking about how good the person looked at his funeral.

The chart below, courtesy of Valance, shows the recent divergence in Conference Board confidence surveys for Canada (blue) and U.S. (red): 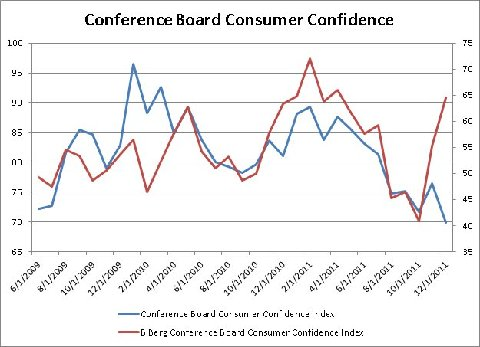 By the same token, if the political environment changes in 2012 or perhaps 2013 after the November election, and more conservative voices gain traction in actual policy settings, then the US will follow the route taken by many of the Eurozone nations and Britain – that is, back towards recession.  When private spending is strong enough the public sector can contract without damaging economic growth.  So hopefully, US politicians will continue to be “irresponsible” and allow the deficit to shrink on its own via growth.