What If the Government Just Prints Money?

The anti-deficit mania in Washington is getting crazier by the day. So here is what I propose: let’s support Senator Bayh’s proposal to “just say no” to raising the debt ceiling. Once the federal debt reaches $12.1 trillion, the Treasury would be prohibited from selling any more bonds. Treasury would continue to spend by crediting bank accounts of recipients, and reserve accounts of their banks. Banks would offer excess reserves in overnight markets, but would find no takers—hence would have to be content holding reserves and earning whatever rate the Fed wants to pay. But as Chairman Bernanke told Congress, this is no problem because the Fed spends simply by crediting bank accounts.
This would allow Senator Bayh and other deficit warriors to stop worrying about Treasury debt and move on to something important like the loss of millions of jobs.

Wray’s proposal is based upon modern monetary theory (MMT) that is the focus this blog and those by Bill Mitchell, Warren Mosler, and Winterspeak. Of course, given the lack of understanding of basic reserve accounting at the heart of MMT and Wray’s proposal on the part of the public, the financial press, and the vast majority of economists, one can already anticipate the outpouring of criticism suggesting that such a proposal amounts to “printing money” and thereby destroying the value of the currency. Some probably will even argue that this would put the US on the road to a fate much like Zimbabwe’s (for a good analysis of what’s actually happening in Zimbabwe, see here).

As such, this post considers whether a given deficit resulting in more reserves in circulation and fewer bonds held by the non-government sector raises the likelihood of spiraling inflation, as most interpretations of the government budget constraint (GBC) assume. The approach here recognizes the importance of understanding the balance sheet implications of both of these options that are central to MMT. While most economists typically assume a supply and demand relationship, as in the hypothesized loanable funds market, and then build models accordingly, such an approach can miss important relationships in the real world. In particular, any transaction in a capitalist economy results in changes in the agents’ financial statements; if the hypothesized supply and demand relations are not consistent with the actual changes occurring within the financial statements of the relevant agents, then the hypothesized model is irrelevant. In a modern money regime such as ours in which there is a sovereign currency issuer operating under flexible exchange rates, “monetization” versus “financing” as characterized both in the GBC and in the hypothesized loanable funds market fall into this category.Consider first the case in which the federal government runs a deficit but neither the Treasury nor the Fed sells bonds. This is “monetization” as usually suggested by the GBC. As always, and as noted by Wray, the Treasury spends by crediting bank reserve accounts at the Fed, while simultaneously instructing the banks to credit the deposit accounts of the recipients of the spending. (The process is simply delayed a bit where the Treasury sends the recipient a check, triggered when the recipient deposits the check at his/her bank.) Taxes have the reverse effects. For a government deficit, the Treasury’s credits to accounts are greater than what has been debited via taxation. Figure 1 shows the balance sheet effects of a government deficit for the private sector, with the effects on banks and non-banks shown separately.

Figures 1 (above), 2 (below), and 3 (below) demonstrate that government deficits create increased net saving in the non-government sector. By definition, additional net saving flows to a given sector are shown on a balance sheet as additional net financial assets and net worth for that sector. The creation of any financial asset generates both an asset and a liability given the two-sided nature of financial assets; in the case of a government deficit, the liability remains on the government’s balance sheet while there is a simultaneous increase in net equity or wealth in the non-government sector.

In Figure 1, the new net financial assets for the non-government sector are the additional deposits—the M1 measure of money—on the non-bank sector’s balance sheet unaccompanied by an offsetting increase in its liabilities. 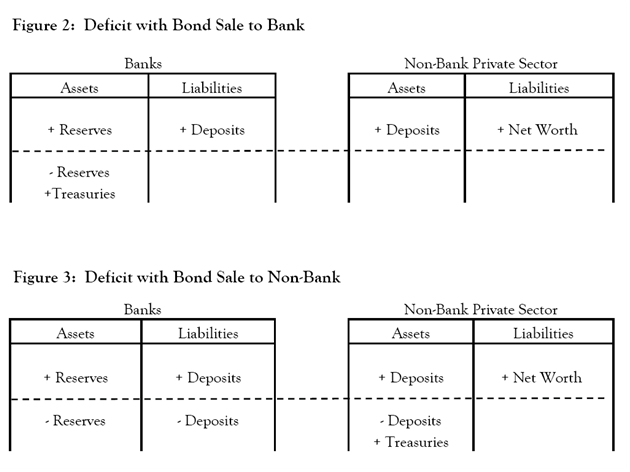 In terms of the effect on net financial assets for the non-government sector, the figures show that there is no difference between “monetization” or bond sales besides potential effects on the federal funds rate that depend on the Fed’s chosen method of achieving its target. But from the widely-held view that “monetization” is more inflationary than bond sales, Figure 1 is assumed to be more inflationary than Figures 2 and 3. Regarding Figure 1, though, recall that banks do not use reserve balances or deposits to make loans, as loans CREATE deposits; bank lending or money creation instead occurs when banks are presented with opportunities to lend at an expected profit (and have sufficient capital). Banks instead hold reserve balances ONLY for settling payments and meeting reserve requirements (see, for example, my previous post on bank lending and reserve balances here), and their desired holdings for these purposes are always accommodated by the Fed at its target rate. What this means is that the reserve balance drain shown in Figures 2 or 3 can in no way restrict potential money creation by banks.

Finally, that the non-bank private sector is holding Treasuries rather than deposits in Figure 3 does not somehow constrain its spending. Rather, just as current holders of deposits could choose to convert their new wealth to time deposits instead of spending, individuals holding Treasuries (which are essentially time deposits at the Fed) could opt alternatively to leverage their wealth (and Treasuries happen to be highly valuable as loan collateral). Indeed, whether holding deposits or Treasuries, with greater net wealth and net income flows provided by a government deficit, the non-government sector might logically be more likely to spend than without the deficit while also appearing more creditworthy to banks (who again themselves are never constrained by the quantity of reserve balances or deposits in the amount of lending or money creation they can engage in). In any event, in the presence of a government deficit, spending by the non-government sector is in no plausible way constrained by the fact that it currently might be holding Treasuries instead of deposits.

In sum, whether or not a deficit is accompanied by bond sales is irrelevant for understanding the potential inflationary effects of the deficit. Under normal Fed operating procedures in place until fall 2008, the operational function of bond sales was to support the interest rate target, not to “finance” a deficit. A government bond sale does not somehow reduce funds available for non-government agents to borrow as presumed in the loanable funds market approach, while the absence of a bond sale does not somehow mean there is a greater amount of liquid financial assets, income, or “funds available” for borrowing or spending than without the bond sale. Instead, a government deficit always adds to the non-government sector’s net financial wealth whether or not a bond sale occurs. Both the Treasury’s bond sales and the Fed’s operations affect only the relative quantities of securities, reserve balances, and currency held by the non-government sector; the total sum of these is set by the outstanding government debt. With or without bond sales, it is the non-government sector’s decision to spend or save that matters in regard to the potential inflationary impact of a given government deficit. Indeed, to be more precise, a deficit accompanied by bond sales is actually the MORE potentially inflationary option, as the net financial assets created by the deficit will be increased still further when additional debt service is paid.

46 responses to “What If the Government Just Prints Money?”