Rising Tides Lift All Yachts: Why the 1% Grabs all the Gains From Growth

You’ve probably seen references to the work of my colleague (and former student), Pavlina Tcherneva in recent days. If not, take a gander at this:

The NYT article includes links to her published article in the Journal of Post Keynesian Economics, the first issue edited by me and my Levy Institute colleague Jan Kregel. Pavlina also presented her results at the just finished International Post Keynesian Conference at UMKC. We’ll soon have a website up with many of the powerpoints and papers. The next conference will be held in 2016. Mark your calendars.

Back to the topic at hand. Rising Tides Don’t Lift All Boats. Who wudduva thought?

Actually, you have to conclude that economists and policy-makers are an optimistic lot. Going all the way back to the Kennedy days, it has been conventional wisdom that if you can boost economic growth, everyone wins.

Actually, as I’ve long argued, that is remarkably naïve and counterfactual. In good times, the powerful grab the spoils. In bad times, they get government bail-outs.

Why on earth would you want to be powerful if you could not protect and even enhance your well-being no matter what the economy does?

Why do elites everywhere always clamor for economic growth? Every policy advocated by them is justified on the argument that it will boost growth. Cut taxes on the rich! Eliminate regulations! Free trade! Slash welfare! Balance the budget! Save Wall Street!

Where such policies do enhance growth, the rich will get more than their fair share. Where the policies do not boost growth, they will increase the share of the rich. Heads they win and tails they win too.

Who would be surprised by that? Well, just about every economist and policymaker on the planet. Why? Because they refuse to consider POWER. While our economy is often referred to as “market-driven”, it is actually driven by power. P. O. W. E. R.

Anyone who’s been paying attention has noticed that the power of the top 1% has risen inexorably over the postwar period. Their ability to shift ever more of the gains from growth to themselves has risen commensurately. As Pavlina demonstrates, the pay-off is obvious. Here’s one of her graphs. 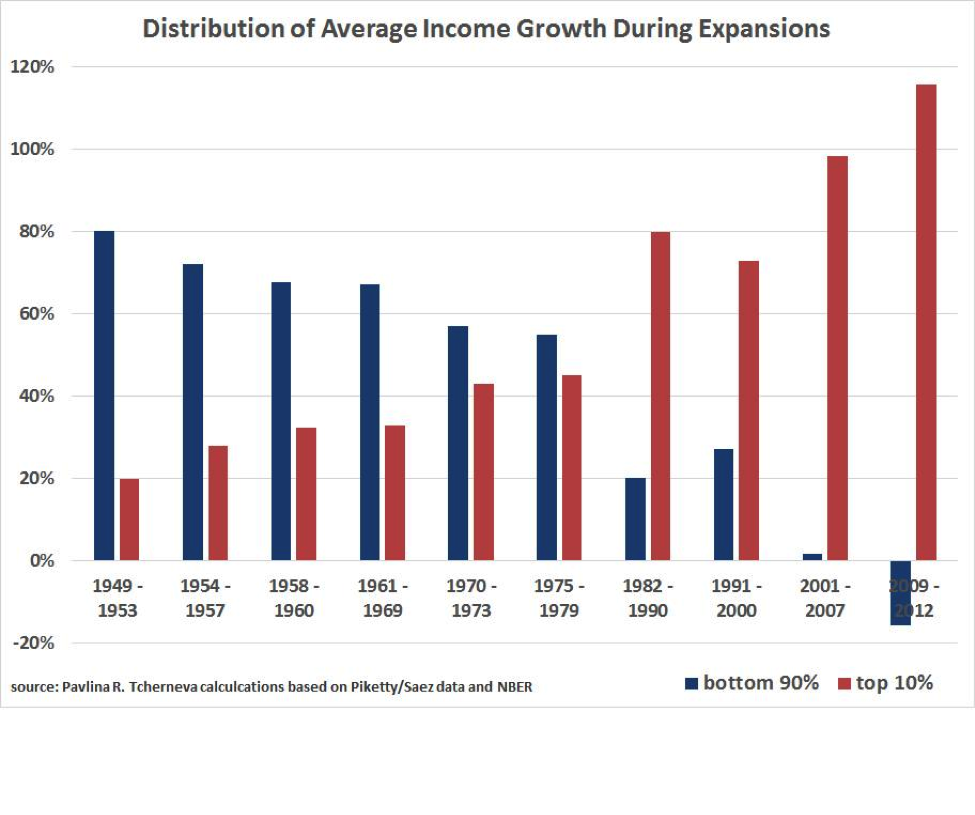 As you can see, with each recovery from a downturn, the rich capture a larger share of the subsequent growth.

She has shown that no matter how you slice up the rich at the top of the income distribution—the top 10%, the top 1%, or the top few tenths of a percent of the top 1%, their share of the spoils from growth has increased in each subsequent recovery.

And when things go bad, Uncle Sam jumps in to rescue them. In the latest calamity, we had tens of trillions of dollars of attention paid to rescuing our top tenth of a percent on Wall Street, and mere peanuts thrown at Main Street. In other work, Pavlina has documented that the “fiscal stimulus” was not aimed at those who suffered the most; and students of mine, namely Andy Felkerson and Nicola Mathews showed that Uncle Ben originated well over $29 trillion in low interest rate loans to rescue Wall Street. (Go here for papers on this project: http://www.levyinstitute.org/ford-levy/governance/)

No wonder that when the economy began to recover, our One Percenters captured more than all the gains. They are rich and powerful, and Uncle Sam directed almost all his efforts to them.

As Hyman Minsky argued back in the 1960s, if you want to reduce poverty you must include job creation as a central component of your War on Poverty. He (correctly) predicted that the Kennedy-Johnson War on Poverty would fail because it did not contain such a program.

Further, he argued that once you’ve provided jobs to all who want to work, you need to gradually shift the distribution of income toward the bottom. You do that by holding down income growth at the top while gradually increasing pay at the bottom.

Who got the difference? The rich and powerful.

Some progressives want to continue the failed policies of the past. They want to use the tried-and-failed twin strategy of economic growth plus welfare dressed in its modern garb, the basic income guarantee. As Minsky argued, we certainly need welfare. Our generosity is a measure of our humanity. However, throwing more money at the poor will never solve our unemployment and poverty problems.

See here: http://www.levyinstitute.org/publications/the-war-on-poverty-after-40-years for an exposition of Minsky’s critique of the failed approach and his proposal for an alternative. As he argued,

“The war against poverty is a conservative rebuttal. . . . It can spread poverty more fairly. . . . However, this approach, standing by itself, cannot end poverty… The liberals’ War on Poverty was born out of neoclassical theory in which it is the poor— not the economy— that is to blame for poverty. The War on Poverty tried to change the poor, not the economy.”

As Stephanie Kelton and I wrote in 2004, 60 years after the War on Poverty began: “’Keynesian’ policies to raise aggregate demand in order to stimulate private sector employment have also been adopted on the belief that economic growth would raise the demand for labor and thereby “lift the boats” of the poor. Still, unemployment rates have trended upward, long-term unemployment has become increasingly concentrated among the labor force’s disadvantaged, poverty rates have remained stubbornly high, real wages for most workers have declined, and labor markets and residential neighborhoods have become increasingly segregated as the “haves” construct gated communities and the “have-nots” are left behind in the crumbling urban core… According to Minsky, the critical component that was missing in 1964, and that remains AWOL in 2004, is a government commitment to full employment. Only a targeted jobs program, paying decent wages, will successfully fight poverty among the nonaged in a politically acceptable manner.

“How,” Minsky asked, “can the distribution of income be improved?” He answered: “First of all by full employment.” By this, Minsky meant that it was necessary to achieve and sustain “tight full employment,” which he defined as: “[the situation that] exists when over a broad cross-section of occupations, industries, and locations, employers, at going wages and salaries, would prefer to employ more workers than they in fact do… The achievement and sustaining of tight full employment could do almost all of the job of eliminating poverty”.

As Pavlina’s work has demonstrated, that was also the position of J.M. Keynes, who favored policies that would directly employ workers over the “pump priming” policies favored by 1960s “Keynesians”. As Minsky explained, those policies would favor the “already well-off”. Pavlina’s work shows convincingly that that was precisely the result.

This entry was posted in L. Randall Wray and tagged 1%, Growth, nyt. Bookmark the permalink.

16 responses to “Rising Tides Lift All Yachts: Why the 1% Grabs all the Gains From Growth”