Posted on January 18, 2012 by admin | Comments Off on Response to blog #32: Friedman’s Functional Finance Approach
By L. Randall Wray
Thanks for comments and questions. As I had alreadyintervened, I addressed the main points related to this week’s blog already.Let me pick up a few loose ends, and reformat my earlier response.
Q1: When you said US Debt/GDP reached 500% was that allprivate debt? And how can the private sector get out of debt?
A: No. Here’s the data break-down. You can see that it iscertainly private debt that has exploded, however. This ends in 2008, and afterthe GFC hit and the US slowed down, government debt started growing rapidly andprivate debt came down a bit as a percent of GDP so it would look a bitdifferent today. 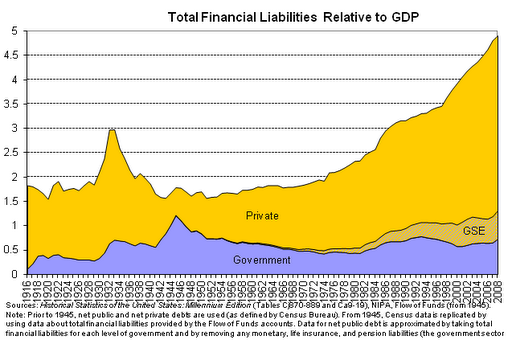 How does the private sector get out of debt? If GDP andincome grow, households can service more debt all else equal, and the ratiowill decline. They can pay off debt. And yes they can default. Note how sharplythe debt ratio came down after the Great Depression—as all 3 of those thingshappened. The most important was economic growth fueled by government spending(and record govt deficits of 25% of GDP during WWII). It can also go down as theeconomy uses export-led growth but for the US that is not likely. The best waywould be to ramp up government spending today.
Q2: Several questions on US current account deficits,foreign accumulation of US Dollar assets, and so on. Also on the Bretton WoodsSystem.
A: I have discussed that a bit previously and we’ll do a lotmore of it in coming weeks—so let’s hold off. With respect to BW: it was amistake. Failed. Worked in the beginning because ROW needed US exports afterWWII and US lent dollars so they could buy them (Marshall Plan). More coming inthe MMP on exchange rate regimes. But briefly, both the BW system and theSterling system (pre WWI) failed. Such international pegged systems do notwork—they always generate crises and then collapse.
Q3: Didn’t Clinton announce he would retire the debt? Did hebelieve it?
A: Yes Clinton appeared on TV and announced all govt debtwould be retired. Who knows or cares what he believed? I think it was Rubin whopushed the idea. But what matters is that all Democrats after him think thatwas the right thing to do, and claim Bush Jr blew it by not continuing with thesurpluses. And so they want to bring back the good old Clinton-Rubin policy assoon as they can get through this crisis! They learned no lessons from thedeath of Goldilocks. Clinton’s tight fiscal policy killed her deader thanElvis.
Q4: Didn’t budget deficits of big-spending Democrats in the1960s cause high inflation?

A: Deficits of the 60s were miniscule. Don’t take my word for it. You can checkit out. Until Obama, no Democratic administration ran big deficits after WWII.Again, check it out. Yes there was some inflation in the late 60s. Big warsusually do generate some—but the war against Viet Nam plus the wimpy and failed“War on Poverty” did not create big deficits because the economy grew fastenough to generate tax revenue. Republicans have always had the biggestdeficits—not necessarily due to big spending, but due to their rotteneconomies that do not grow. Coincidence? Me thinks not.

Q5: Don’t you accept the dollar because you can convert itto gold?
A: Hah: I’ve never done so and would never consider it. Goldis a fool’s gamut. We all accept Dollars because there is a tax system thatrequires them.
Q6: Later Friedman said inflation results from excessivemoney supply.
A: Yes, and he was wrong then and he’s still wrong. Hisfunctional finance paper is probably the only thing he ever got right. Andnobody reads it!

Comments Off on Response to blog #32: Friedman’s Functional Finance Approach