Posted on December 1, 2010 by admin | 9 Comments
By Eric Tymoigne
The Great Recession is a replay of the Great Depression in many ways; one of them is fiscal policy. Let’s rewind the tapes:
-1929-1930: President Hoover’s first response is to do as little as possible to let market mechanisms do the job of “correcting imbalances.” The general consensus is that government deficit would lead to crowding out effects and so would worsen the economic situation. As a consequence, those first two years records a fiscal surplus (Figure 1).
-1931-1932: The economic situation worsens and enters into a debt-deflation process. Hoover is forced to increase government involvement through policies like the Reconstruction Finance Corporation. This leads to a fiscal deficit representing about 2.5% of GDP.
-1932-1933: Public opinion is outraged by the “massive” deficit and “waste.” Roosevelt runs a Presidential campaign that promises to bring back the federal government fiscal position into the black; he is elected in a landslide.
-1933-1936: Roosevelt puts in place New Deal programs and experiments a bit more with fiscal deficit. While the scale of ND programs is quite impressive, their actual impact on the deficit-to-GDP ratio is limited with a deficit of 5% relative to GDP. Unemployment rate (Figure 3) goes down from 25% to 9% if one includes WPA, CCC and others New Deal employees into the employed population (official data counts them as unemployed). WPA, CCC, and other work programs bring the US into the 20th century in terms of infrastructures (electrification, irrigation, schools, etc.). However, all this is completely overshadowed by outcries about the “unsustainable” deficit and the supposed “communistic” nature of the New Deal.
-1936: An election year, Roosevelt feels the pressure in terms of discontent regarding the deficit so he proposes to cut New Deal Programs massively (see Figure 2) and to lower other government expenditures.
-1937: Recession year. Roosevelt implements his proposal to “restore fiscal sanity.” The decline in government spending leads to massive layoffs, and so to a decline in wage earnings. Profits of companies also go down because of decline in aggregate demand. Nobody is happy even though the deficit-to-gdp ratio reaches 0%.
-Back to the present:
We are now in 1936 with the government focused on trying to cut deficit because “America cannot be great if we go broke”. The government proposes to cut government spending and to raise taxes.
Get ready for a replay of 1937 if the government goes through with its propositions. The first step in this direction seems to have been taken with Congress failing to extend unemployment benefits.
This constant hysteria about fiscal deficit is counterproductive, dangerous and unnecessary. The deficit to gdp ratio (and debt to gdp ratio) will go down by itself as the economy recovers, no need to cut government spending and to raise tax rates now. On the contrary, one should let government spending and tax levels be whatever they need to be to promote economic stability. As the economy recovers, government spending will go down and tax levels will rise (given tax rates) which will lower government deficit.
Figure1 . Deficit/GDP ratios 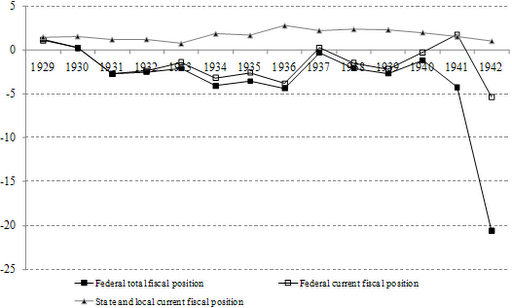 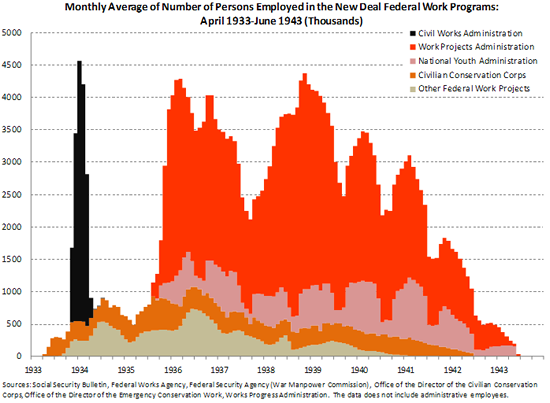 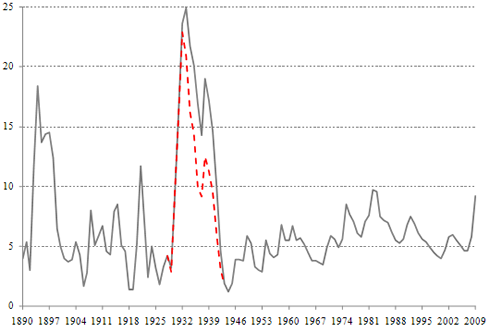 Sources: BLS, Historical Statistics of the United States by Census Bureau (ed.).
Note:  Data is for persons 16 years old and over, except prior to 1947 when the figures are for persons 14 and over.  Dotted line represents the corrected BLS data to remove emergency relief workers from unemployed.